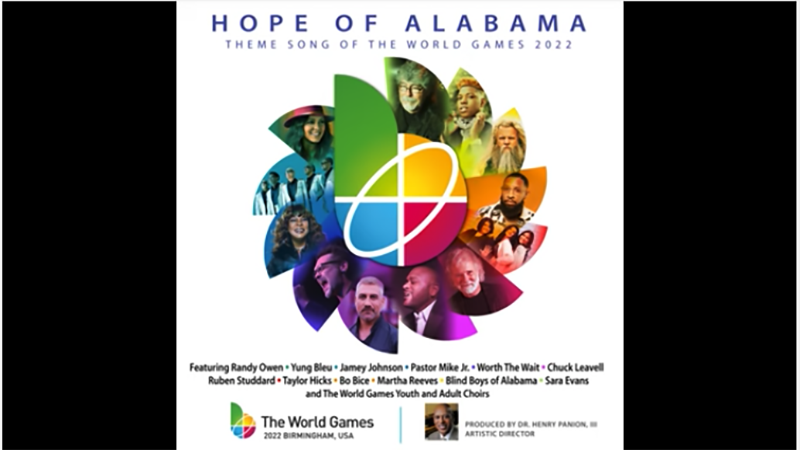 At a time when global unity is needed more than ever, The Music of The World Games shares a theme song to encapsulate the strength and power of a moment where athletes, teams, coaches, entertainers and fans from all different walks of life and cultures will come together with Birmingham presentation of The World Games 2022. Available everywhere today, “Hope Of Alabama” is a star-studded collaboration that merges genres and generations.

Produced by World Games Artistic Director Dr. Henry Panion III and penned by ALABAMA’s Randy Owen, his daughter Allison Owen, and Panion, “Hope of Alabama” brings a fresh voice to the world from a community that has experienced its share of trials, hardship, and tribulations. Yet, through its music, represented here by the broad range of artists from the world of rock, country, R&B, gospel, and hip-hop, the message of “Hope of Alabama” is one of eternal unity and love to the world, especially in these troubled times. As athletes from across the globe descend on Birmingham, Alabama for the World Games this Summer, these Alabamians send them back to their homelands with more than just medals, but with this message: “Hope of Alabama is the hope for all the world. Every man can hold on, every woman, boy, and girl. It is the dawn of the new day, when love is what we bring. Ev’rybody sing, sing, sing!”