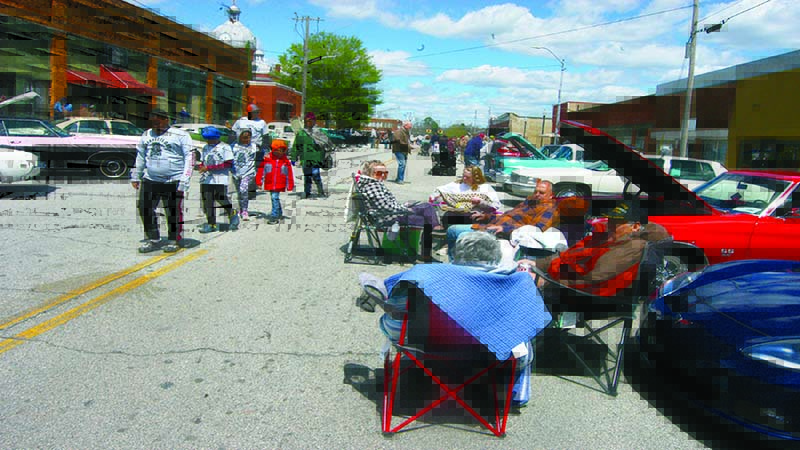 LaFAYETTE — Despite some unseasonably cool and windy weather, LaFayette Day was a very successful fundraiser for Valley Haven School this past Saturday.

“Considering the weather, it went about as well as it could have gone,” Valley Haven Executive Director Craig Brown told The Valley Times-News. “We couldn’t do many of the kids’ activities we had planned on doing because of the cold, windy weather. We did have the bouncy house and the train rides.”

The antique and classic car show was down to an estimated 50 vehicles this year. It’s usually around 80. The number of food and arts and crafts vendors was noticeably down, too.

“It was cloudy, windy, and cold during the morning,” Brown said, “but when the sun came out in the afternoon, the crowd really picked up. Everyone seemed to enjoy themselves, and that’s what we want on LaFayette Day.”

“We want to thank local officials such as the City of LaFayette police officers, firefighters and EMTs for helping out,” Brown said. “We also want to thank county officials for the use of the restrooms in the courthouse. A lot of people coming together is what allowed us to overcome the obstacles and have a really good day.”

The annual Hike/Bike/Run Motorcycle Ride had fewer participants than in past years. One biker who did make the ride said it was the coldest Hike/Bike/Run ride he’d ever taken part in.

One part of LaFayette Day that went off as scheduled and was much enjoyed by the crowd was the live entertainment.

The auction is switching from the community center to the school this year. This will give bidders the option of coming back to get a large item they have been the high bidder on. They won’t have to take it with them that night. The doors at Valley Haven will open at 5:30 p.m. on the evening of the auction. This will give people turning out for it a chance to see all the items that will be up for bids when the auction starts at 6 p.m.

The Hike/Bike/Run started in 1977 as a small fundraiser to supplement the match for Valley Haven School. It has since grown into the single biggest source of support for Valley Haven. The money that’s raised serves as the local match for the state and federal funds that keep the school running. The Hike/Bike/Run is now in its 46th year and LaFayette Day in its 26th year.

“When you support Valley Haven School through such events as LaFayette Day, the Auction and the Hike/Bike/Run Day you are doing something good,” said LaFayette Day Chairperson Lynn Oliver. “You are helping our special citizens. When a Hike/Bike/Run fundraiser breaks the $100,000 mark, everyone feels good about what we have done for Valley Haven School and its students.”