Local family needs support after their house burned down 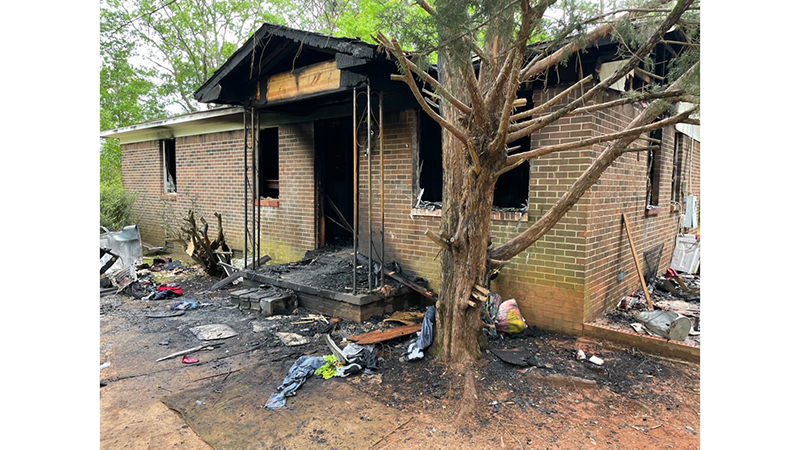 Help needed: Annie Ricks recently buried her grandson, Jay, on April 22. Then, on Tuesday, the home she has lived in for more than 30 years caught on fire and has been considered a total loss. Photo contributed.

One tragedy is bad enough, but a local family has suffered two in a row and desperately needs support. Jacobie Phillips’ older brother, Jay Ricks, died on Good Friday and was buried on Phillips’ birthday, which was on Friday, April 22.

“It was three of us,” Phillips said. “He was the middle child.”

Then, on Tuesday, Phillips’ grandmother’s house in Fairfax burned down. There were four people living in it, including Phillips.

“I was back there actually asleep in my room until my grandmother came, and she screamed my name and woke me up,” Phillips said. “And by the time I woke up, I smelled the smoke. She was like, “The living room is on fire.’ So, I got up, and I looked at the hallway and the fire ablaze. I instantly just kind of sprung into action.”

Phillips said he escaped by pushing an air conditioning unit outside and climbing through the window. His grandmother followed after him.

“I’ve never been in a situation like that ever in my life,” he said. “That’s how scary it was. It was terrifying. But, you know, God had us… I’m glad he kept us calm and in a right state of mind.”

Phillips believes the fire was electrical in nature.

“She’s been in that house for 30 plus years before I was born,” Phillips said of his grandmother, Annie Ricks. “I’m 29.”

The house was a total loss, and the family is now living in a Days Inn hotel room in Lanett.

They need money, food, drinks, clothing, hygiene items and other essentials. Phillips said he wants to apply for SNAP but hasn’t gotten around to it because he doesn’t have a working car. He said canned food would be appreciated because his family doesn’t have a stove right now.

Additionally, Phillips needs insulin because he is a type 1 diabetic.

Phillips said his family has been given some money but needs more. Kay Crowder, a friend of the family, has been a big help. She bought them their hotel room, food and essentials such as deodorant, socks and undergarments.

Phillips said he met Crowder over a year ago at Stellar Staffing in LaGrange, where she helped him get temporary jobs.

A lot of people have reached out to help Phillips’ family already.

“I just want everybody to know that they’re highly appreciated for everything they’ve been doing,” he said. “And I mean that from my heart. I really do. People aren’t obligated to do anything, honestly … It feels good to know that the Valley area, the Lanett area, wherever the love is coming from, that they find it in their hearts to even give support.”

Phillips said he was especially grateful for any help his family receives because everyone is going through hard times.

Phillips said his family could use men’s clothing in these sizes: Extra-large and large shirts, medium-sized boxers and pants in sizes 34/33 and 32/32. He was unsure of what clothing sizes his grandmother needs.