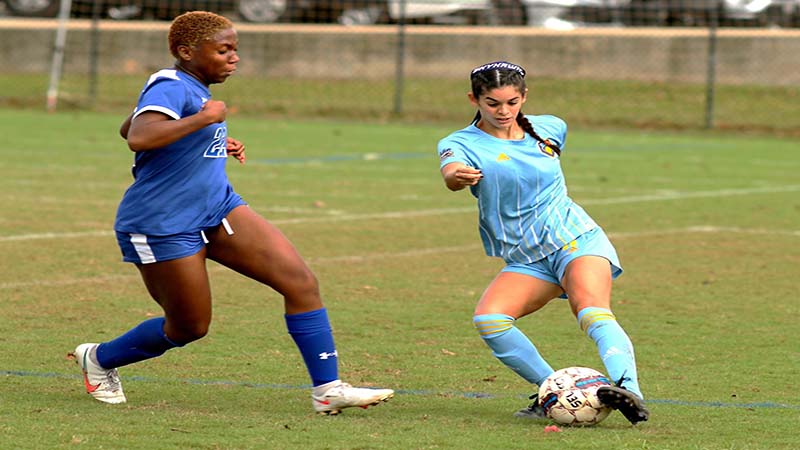 Nathaly Villalobos finished her sixth season for Point University’s women’s soccer team, but her love for the sport started in her hometown of Bayamon, Puerto Rico.

“I started playing when I was 10 years old,” Villalobos said. “I don’t know why I became interested in it. I just started kicking a soccer ball around.”

Before she was recruited to play at Point University, Villalobos played for several clubs teams in Puerto Rico, including Bayamon FC. She has also played for the Puerto Rican national team three separate times.

Although Villalobos moved from Puerto Rico to small-town Alabama, the adjustment wasn’t too much of a challenge for her.

“I had never really been anywhere but Florida,” Villalobos said. “It wasn’t that hard because I already had a few friends from Puerto Rico that I already knew for years. If I didn’t have friends here it would definitely be harder.”

“In Puerto Rico, everything is close,” Villalobos said. “You can get from north to south in a two-hour drive. The weather was different. I was not used to the cold at all.”

Another challenge Villalobos faced was the change in the style of play.

“Here it’s a little bit faster and not as attacking,” Villalobos said. “Back home, it’s more of an attacking style rather than a defensive style where you look for spots to attack.”

As for her career, Villalobos had to overcome a torn ACL along with COVID during her time at Point. Her biggest inspiration for her career is FC Barcelona legend Andrés Iniesta.

“I just loved the way he played,” Villalobo said. “I just wanted to reach that kind of level. I’m not really there, but it was something to look up to.”

Despite a few setbacks, Villalobos still sees herself playing soccer in the future.

“Ever since I tore my ACL it was kind of difficult,” Villalobos said. “I strive to play for Puerto Rico again. I want to keep playing and improving the way I play.”

If soccer doesn’t work out, Villalobos has other plans for her life. She graduated from Point University with a bachelor’s degree in psychology and is currently pursuing a master’s in business administration.

“In the future, I want to open a coffee shop,” Villalobos said. “I want to move around because here it’s small, and I like the big city feel.”