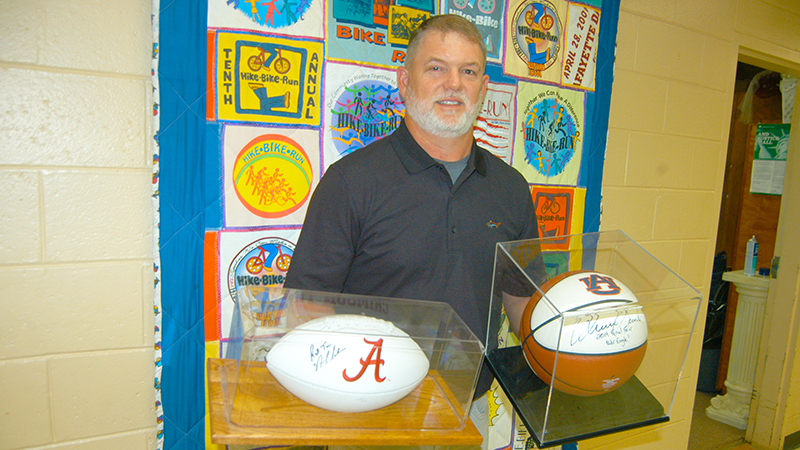 Auction items: Valley Haven Executive Director Craig Brown displays two items that will be auctioned off this Friday at Valley Haven School. On the left is an Alabama football signed by Nick Saban and at right a Final Four Auburn basketball signed by Bruce Pearl. The auction will take place inside the lunchroom at Valley Haven. Photo by Wayne Clark.

A wide variety of items are gathered in the large rooms at the school. Most of them can be brought in and displayed when they are up for bids.

One item that can’t be brought in is one of the Valley Haven buses. It’s a 2009 model and is in excellent running condition.

“It will be a good buy for someone,” said Valley Haven Executive Director Craig Brown. “We’d like to get several thousand dollars for it.”

Auburn and Alabama fans can compete in seeing what goes for more money, a Nick Saban autographed football or a Bruce Pearl Final Four autographed basketball. Each one comes with a display case.

Interesting and unusual items include a grandfather clock that’s in good condition and an adding machine that was once used at Hogansville City Hall. It’s the kind where the numbers are punched in and a crank pulled to add the figures. It’s been in a basement for a long time but still works.

For fans of Coca-Cola collectible items, a vintage cooler on legs and with a sliding top will be going to one lucky bidder. There’s an unusual piece of furniture for the hard stuff. When it’s closed, it looks nothing like a miniature bar, but when it’s opened up, there’s spaces where the favorite drinks are being kept, and plenty of glasses to go around. There’s even a good supply of bottle head corks.

Local businesses have stepped up to donate some nice items for the auction. Pawn City in Lanett has donated a highly prized 1955 Les Paul custom guitar, Phillip Sparks of Grills & Frills has donated an Oklahoma Joe grill with a smoker, Batson-Cook Hardware a Stihl cordless FSA45 line string trimmer (or weed eater) and Marvin’s has provided an 80-pound Push Spreader.

There’s a pre-owned electric Casio CTK-2300 keyboard with stand, an assortment of pre-owned wooden chairs, a blue office chair, a blue two-step step stool, a leather recliner, a 9 x 12 carpet that’s never been used, a 28-inch portable fire pit on wheels, a four-and-half pound Craftsman vise with set of grinding disks, and many, many other items.

Dr. Corey Courtwright talks about his work in Panama