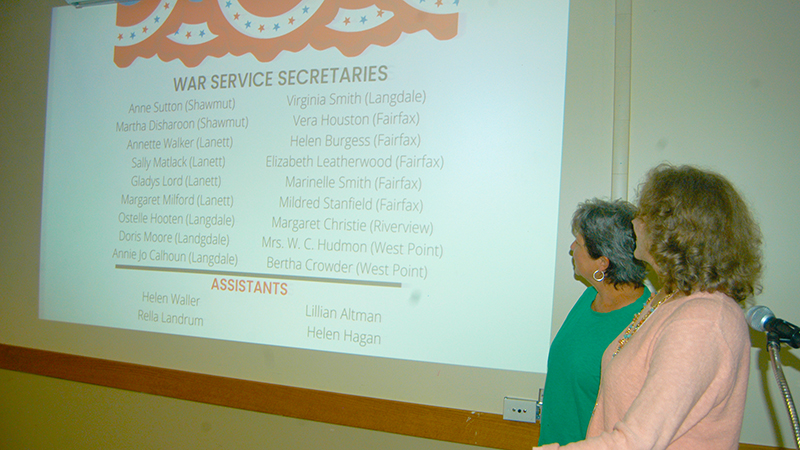 VALLEY — A group of women from the Valley went above and beyond the call of duty in supporting our troops during World War II. They were the women of the War Service Centers. Each mill village community had one, and the women who worked there did yeoman’s work in writing local soldiers who were away from home, keeping track of their almost constant movements and having information published about them in The Chattahoochee Valley Times. They did this while holding down regular secretarial jobs with the West Point Manufacturing Company.

Retired history professor Dr. Karen Stone talked about this Tuesday afternoon at Bradshaw-Chambers County Library. A large gathering was present in the Lanier Room to hear her speak.

Most stateside communities had American Red Cross centers and USO organizations to keep in touch with local soldiers who were abroad, but it was most unusual for an entirely local organization to take this on.

“I don’t know if you can say it was unique, but it was exceedingly rare,” she said. “Theirs is a story that needs to be told.”

Stone became most impressed with what they did in the WWII years while she was doing research for a book project she was working on in 2019-20. An effort was underway to have a revised second edition of the green, hardcover book “The Valley in World War II” which came out after the war.

The plan was to reprint the photos of local soldiers and the special section on the ones who had lost their lives. Stone was asked to write an introduction to the new book, and while researching information for it came across the enormity of what the Women of the War Service Centers had done between 1942 and 1945.

“These women wrote more than 133,000 personal letters to these young men,” Stone said. “They sent them birthday cards, get-well cards, Christmas cards and a box filled with all kinds of good things to remind them of home during the Christmas season.”

The War Service Centers in Lanett, Shawmut, Langdale, Fairfax and River View each had an honor banner with embroidered stars for the soldiers for that town. It was hand-sewn by the women of the center.

One of these soldiers was in 15 camps in a five-month period. It could be awfully hard to track down where any local serviceman could be at any point in time.

While the young men were away at war, the mills were running at full capacity. There was a great demand for duck, and that’s what the local mills made. Women and high school kids stepped up to man the jobs the young men had left.

Every War Service Center had two maps, one of the U.S. and a world map. Pins placed in the maps would mark the last known locations of local soldiers. Both maps had lots and lots of pins in them.

Some of the letters that were sent out remain. There are 23 boxes full of them from Shawmut, 18 from Lanett and six from Langdale. The boxes from Fairfax and River View have disappeared over the years.

“If anyone out there knows where the Fairfax and River View letters are, we’d like to see them,” Stone said.

Stone may be the only living person who has read all of them.

She especially likes the letters written by Anne Sutton, who was the secretary of the Shawmut War Service Center when it first started.

“She was a buddy to the soldiers,” she said. “She had taught some of them when they were in the second grade at Shawmut School. She wrote the graduation song for Valley High when it became a school in 1939.”

Sutton liked to take the soldiers she wrote on a tour of the War Service Center.

“She would tell them what it looked like on the inside and how welcoming it was,” Stone said. “The furniture and the accommodations were excellent, and the fireplaces kept the rooms warm in the winter and had flowers in vases on the mantels in the spring and summers. Coffee tables would have souvenirs from the camps local soldiers had been stationed at.”

“You have to kiss the secretary goodbye on your way out,” she would write them. “Am I the kissing-est woman in the Valley?”

Stone said it must have broken some of the soldiers’ hearts when they saw her wedding announcement in The Chattahoochee Valley Times in 1942.

“I think I fell in love with Anne Sutton when I read her letters,” Stone said. “They had so much personality.”

The women at the War Service Centers stayed extremely busy. In addition to all their duties at the Center, they had a lot of paperwork to do for West Point Manufacturing Company.

Tracking down a local soldier could be a mighty tough thing to do. After the attack on Pearl Harbor, millions of young men were reporting for service all over the country. It was the job of the War Service Center secretary to contact the sergeant of any local soldier. By the time the sergeant got the letter, that soldier was already gone. He was also swamped with other such letters. Most of those letters were forwarded somewhere else without being opened. It was a good thing if that letter included a bonus check for the soldier.

In January 1942, the U.S. Postal Service gave high priority to expediting letters being sent to soldiers.

“It was second only to ammunition in what was being mailed,” Stone said. “All the letters were sent to New York or San Francisco. The letters would be bagged there and picked up by the military.”

Kodak offered to take photos of letters with 16-millimeter film. It would be the start of something known as Victory letters, or V-letters. It was free to the troops.

“It was a good idea, but the public was skeptical,” Stone said.

This process could result in 150,000 letters being put in a single knapsack.

Stone said there was a unit of African-American women who were sent to England during the war and did an incredible job of sorting mail going to U.S. soldiers stationed there. One of them named Charity Adams Early is today living in Montgomery.

The unit is thought to be the only group of African-American women deployed to Europe during the war. There were approximately 100 of them and they worked three eight-hour shifts every day. It’s estimated that they processed an average of 65,000 letters per shift.

“That’s an amazing story that needs to be told,” Stone said.

Stone said that once one starts reading the World War II letters sent to local servicemen you just can’t stop.

“Every letter is so interesting,” she said.

One letter sent to the War Service Center by a young man named Bill Cook praised the women for the work they did. “Nothing is better for a soldier’s morale than to receive a cheerful note from back home,” he wrote.