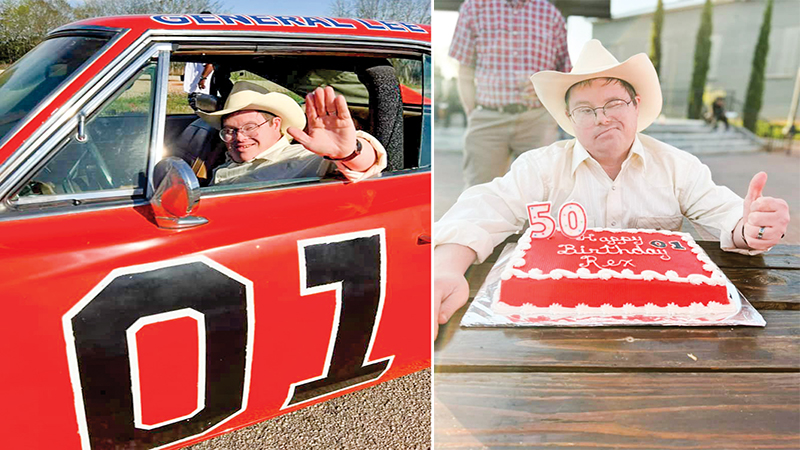 A LaGrange man with Down syndrome was given the ultimate birthday present Sunday as he turned 50 years old.

Rex McLaughlin loves the Dukes of Hazzard, so his family put together a complete scene from the show to make his day.  April McLaughlin Box was recording carefully as her husband, Brad Box, under the guise of the Dukes of Hazzards’ Luke Duke, ushered, Rex McLaughlin outside, saying that ‘the sheriff was hot on their trail,’ a famous occurrence for the actual Duke boys in one of Rex’s favorite shows.

Rex left his home to find a perfectly identical General Lee sitting in his yard, not to mention an authentic copy of Sheriff Rosco Coltrane’s car and another cop car as an escort. For the next few moments, Rex was a true Duke boy.

But Rex’s birthday did not stop with the adrenaline-inducing ride. As Rex and ‘Luke’ escaped Sheriff Rosco Coltrane’s clutches, they were met with countless friends and family members dressed as characters from some of Rex’s favorite shows — the Flintstones, Gun Smoke and Price is Right.

Box, who lives in Tyler, Texas, said the fact that her brother has made it to such a milestone is not lost to her or her family.

“[Those with] Down syndrome age very quickly, so it’s tough with him turning 50. We’re not sure if we’re going to get a 60th [birthday,]” she said.

Rex is Box’s older brother and lives in LaGrange with his mother, Sharon Spriggs, and step-father/best friend, Bubba Spriggs.

Box recalled that her older brother was treated no different than her and their other younger brother Major McLaughlin, receiving punishments just as they did.

Box described her brother as “hilarious” and “stubborn” but that he had a heart of gold. She said he “lives” in the TV Land channel and loves classic television shows.

She noted Rex is kinder and more understanding than she when it came to his Down syndrome condition. She recalled a moment during their childhood when a neighborhood kid was making fun of Rex. Their dog, Pepper, who met them at the bus stop on the corner every day, started urinating on the kid. While Box praised the dog, Rex grabbed a stick out of the yard and started spanking it.

“I told Rex to let Pepper keep going. Rex said, ‘You can’t be mean to people.’ Rex was a far better person than me,”

Box can still remember sitting at the dining room table as a child and being told Rex had Down syndrome. She said she learned he wasn’t perfect, even though he was in her eyes.

“My dad had the perfect quote when he told us,” she said. “He said every parent worries what will happened to their children when they leave this world. We were blessed because we got a kid with a ticket to heaven in hand.”

Rex formally worked at Home Depot and used to go with his father, Tom McLaughlin, to Wayne Tire Service in LaGrange before he passed away in 2016.

Due to his long-time roots in LaGrange, Rex knows everyone, Box said.

“It doesn’t matter where we go, he loves someone,” Box said. “We went to an [event,] and we didn’t know a soul, but Rex was shaking hands and knew everyone.”

The night before his birthday, Rex’s family gave him a shirt like Bo Duke’s and told him to wear it the following night. She said he immediately recognized the shirt but had no idea what would take place.

The General Lee and Roscoe P. Coltrane’s sheriff car are owned by a family acquaintance, Scott Willingham. The General Lee is autographed by the original actors from the show; also arranged for Sonny Shroyer, 86, who played Enos in Dukes of Hazzard. The Troup County Sheriff’s Office and LaGrange Police Department acted not only as escorts but additions to the chase scene the family planned for Rex, Box said.

Among the party visitors were several of Rex’s Troup High School 1991 classmates and several life-long family friends. As an additional gift, Shroyer, called Rex to wish him a happy birthday.

Box said each moment with her older brother is precious and hopes the life lessons about kindness and acceptance can be shared.

“My brother, who was born with a disability, is looked at as someone that needs to learn from us, but it is the complete opposite of that,” she said. “I look at him and say he’s someone that we can learn from, and I’m still learning from. Don’t get me wrong, he and I can go toe-to-toe quite often and butt heads like no one knows. However, every crazy quirk he has makes me realize something new about life.”