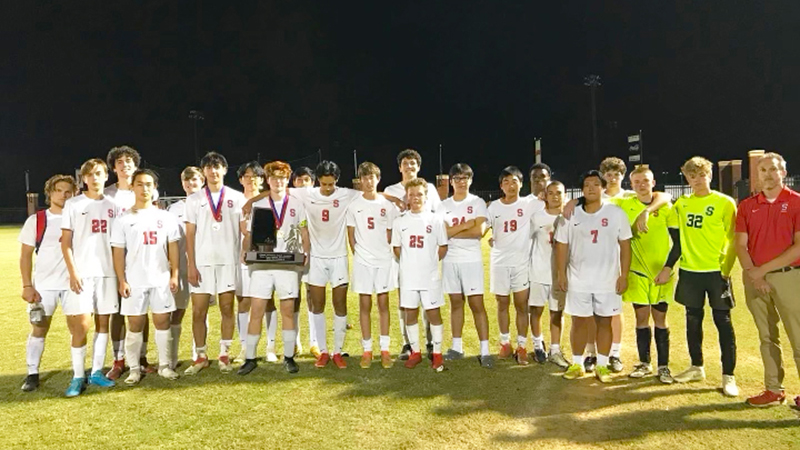 Something to build on: The Springwood boys soccer team finished the 2022 campaign with its best record in school history, capping it off with an appearance in the AISA State Finals. Above, the team poses for a photo after the trophy presentation. Photo contributed.

The Springwood Wildcats soccer team finished their best season in school history with a loss to Tuscaloosa Academy in the Alabama state title game last week.

The Wildcats finished the regular season with a 12-2 record, and they won both of their first two playoff games 10-0. They lost in the state title game 3-2 in overtime.

“I’m really proud of the guys for how far they got,” Springwood coach John Lanier said. “Tuscaloosa has won two straight state championships and 26 games in a row. My guys gave everything they had.”

“You feel for the seniors because that’s their last game,” Lanier said. “You hurt for them the same way every year. For me, to be that close, I just want to get back and win it.”

Luckily for Springwood, Tuscaloosa Academy will be moving from the AISA to the AHSAA next year.

As for the playoffs, the Wildcats dominated in both of their first two playoff games thanks to a complete team effort.

“We won the first two games of the playoffs by a mercy rule,” Lanier said. “We had several guys scoring. We also had two shutouts with the keeper and our defense. Even in the finals, both of our goals were scored by different guys, and the defense played well. It’s really just a team effort.”

Despite losing in the Finals, the whole season was considered a success for coach Lanier.

The season may be over for Springwood, but coach Lanier is already looking to next season.

The Wildcats finished the 2022 season with a 14-3 record as runner-ups in the AISA AAA championship.