The race is on: Rep. Debbie Wood and Micah Messer discuss stances on issues 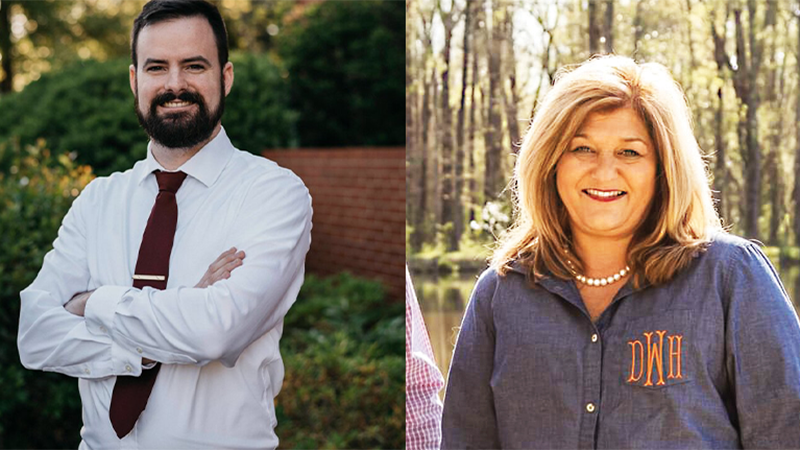 District 38 candidates: Micah Messer (left) and Rep. Debbie Wood talk about the issues that are most important to District 38 as they prepare for the May 24 Alabama primary. Photos contributed.

The race is on for District 38 seat in the Alabama House of Representatives, which will be up for a vote during the Republican primary on May 24. The Valley Times-News interviewed incumbent Rep. Debbie Wood and challenger Micah Messer to see where they stand on the issues.

Both Wood and Messer are proud Republicans. Wood said she has been a Republican all her life and has run for public office 12 times as a Republican.

Messer said being a conservative and being a Republican are not necessarily the same thing.

“Republican is a party,” he said. “Conservative is the values. And traditionally, Republicans have conservative values.”

Messer said that if Alabamians want to be governed conservatively, they should vote for conservative leaders.

There are noticeable differences in how Wood and Messer think about education.

While Wood doesn’t like Common Core educational standards, she believes in having standards for school curriculums.

“We have to have standards to know if our children are being taught the skills they need to pass the tests,” she said. “If there are no standards, how do we know what they’re being taught?”

Messer notes on his website, https://www.messer2022.com, that after Common Core standards were passed, Alabama ranked last in math test scores. He believes the standards defy common sense and confuse children.

Wood believes in improving education with funding. She serves on the Alabama House Ways and Means Education Committee, which decides how money will be spent on education. She said that for the past two years, the committee has focused on how well teachers in Alabama are paid. She was proud to say it helped pass a four percent pay raise for Alabama teachers, excluding retirees, that will become effective in 2023.

“We’re having a terrible time getting teachers in our state,” she said. “They want to go into other fields because they can make more money.”

She explained that each person on the Alabama House Ways and Means Education Committee gets money to use on their local schools. She gave an example of how she had chosen to spend money on a local school. Beulah High School had communicated to her that they wanted to have their own track because they had to bus athletes to another school to run track. Wood was able to grant them $15,000 for a new track.

Messer believes Alabama should have a school-choice program.

“The State of Alabama should allow parents and guardians to use the public tax dollars normally allocated to the schools for their children wherever they wish,” he says on his website. “But, we have to do it right. There must be no strings attached to the refund to the parents regarding their tax dollars — no government control over private sector schools or co-ops!”

Both Wood and Messer are against teaching critical race theory in schools, assuming that it teaches hatred.

“If we’re teaching critical race theory or any other thing that causes children to look at another child or another race or another person that’s different than them on just the basis of hate, then we don’t need it,” Wood said. “We need to be sure that we teach history. We can never, ever abolish what has happened. And we don’t need to forget what has happened. But we absolutely can’t blame people for the actions of individuals who came before us. We can learn from them.”

Messer said race is a big issue in the United States and has been for a long time. He doesn’t think it will ever fully go away because people naturally judge each other based on arbitrary things like appearance. He argued that students can learn about racism in regular history classes.

“We shouldn’t have an ideology inside of our school system that teaches that because you’re African American, you will always be oppressed, and you will never be able to achieve something,” he said.

Messer said parents have sent him examples of critical race theory being taught in District 38 schools. He doesn’t know if it was taught intentionally or unintentionally in these cases.

Both Wood and Messer are pro-life, but Messer’s position is more extreme.

Wood is against abortion in most cases, including those considered due to rape or incest.

Wood clarified that the health of the mother includes mental health.

Messer said the only situation in which abortion should be permitted is when the mother is definitely going to die if she doesn’t get one. He gave ectopic pregnancies as an example.

“Every child is a blessing from God,” he said. “And in bad situations … God sometimes provides his blessings in ways that we don’t seem to understand or understand at the time. And adoption’s a wonderful thing, something I would love to pursue in the future. My wife and I have talked about it. And I think that’s a great option for a lot of people.”

Wood and Messer have different ideas about what District 38 needs most.

“We have a large section of our community that [does] not have broadband,” she said. “I think that is extremely important. We found out how important it was when our schools closed down for COVID, and our children had to use technology to learn. We had a lot of students who couldn’t do that. We had hot spots that we put on school buses that we thought would help. But can you imagine working all day, having three children at different levels, getting in a minivan, going to sit beside a school bus in your car doing homework?”

Meanwhile, Messer named economic issues such as supply chain problems and gas prices as some of the biggest challenges faced by the district.

“Before I decided what I was going to run on, I talked to a bunch of folks,” he said. “You know, what’s your concern? And generally, it was the tax rates, the financial burdens on everyday folks and how that’s affected us, and then also education and then our freedoms and making sure those are secure.”

Wood said she has three main platform issues: education, medical freedom and fiscal responsibility. Wood was able to brag about some of her accomplishments while in office.

She explained her stance on medical freedom.

Medical freedom is personal to Wood, who lost her mother in 2021. She wasn’t able to be with her mother in a nursing home during her mother’s final days because of COVID restrictions.

The experience led Wood to pass a bill she considers one of her greatest accomplishments.

“After that, I passed a bill that said even in the midst of COVID, when our loved ones are dying, there needs to be someone with them,” she said. “So, we passed a bill to allow at least one family member to be there when a loved one is dying in any circumstance. We should have the right to be with our loved ones.”

Because of her belief in medical freedom, Wood abstained from voting on an issue dealing with hormone blockers for transgender children.

“I’m getting attacked because I chose to not vote on that issue because I don’t think it’s an issue that belongs with the government,” she said. “I think that’s a family decision … I’m the only Republican that abstained because I feel like it’s personal freedom.”

However, Wood said she voted against male-bodied transgender children from using girls’ restrooms.

On the subject of fiscal responsibility, Wood shared how she had helped the state pay back debt.

​​“The education trust fund, we have what’s called a rainy day fund, that we have money in there, and that money comes from the oil settlement fund that happened off of the gulf,” she said. “In 2010, there was $161.6 million that was repaid back to the general fund that we had borrowed and used for education and other issues when we got really low with funds in the state of Alabama. So, in 2022, before I became a legislator, in 2013, 2014 and 2015, there was $293.9 million withdrawn from the trust fund to help offset the costs that the state needed to pay. So that keeps your schools from going into proration, that keeps you from having a negative balance. So, in 2022, we decided to repay all of that money back, and we paid $293.9 million to the trust fund, and it’s completely paid off.”

Wood is also proud of helping Smith Station get its own physician. She said it had a resident who had graduated from medical school and is currently in residency.

​​“There’s a program for rural doctors,” she said. “Smith Station did not qualify even though it’s considered a rural city because it’s under 5,000 people because they had basically grouped Smith Station with Phenix City. And Phenix City has numerous physicians. So, I fought to have them separated. And now, they will have their own physician that grew up in Smith Station that is now going to return, and they will have a local doctor starting Aug. 1.”

Wood is proud to have worked with a Democratic friend to have Medicaid cover mental and physical healthcare for mothers 12 months after they have given birth. She said previously they only received coverage for 60 days after having children.

“Most of the medical issues with a woman, whether it’s post-partum depression or other physical issues, happen in the first 12 months,” Wood said. “Well, how can you keep a baby healthy if their mother’s not healthy?”

“On Interstate 79, I was able to get a $3 million grant that is going to totally revamp our entrance into the state of Alabama,” she said. “We’re going to have new lights, new poles, new traffic signals. And that grant was a grant that totally funded five [states]. In Lee County, we needed a traffic lane, a turning right lane in front of the Loves truck stop along 280, and that’s also going to be funded.”

Some of Messer’s platform issues not already mentioned are repealing the 2019 gas tax, curbing the emergency powers of the governor, removing the Alabama Certificate of Needs Board and passing voting integrity reform. He explains these in detail on his website.

Messer believes the gas tax was never necessary and that the people of Alabama didn’t want it. He argues on his website that the general fund budget still would have increased significantly from what it was in 2018 to what it was in fiscal year 2020-2021 had the gas tax not been passed.

He explained why he was for curbing the emergency powers of the governor.

Messer argued that the government is supposed to have checks and balances. He called the legislative branch in Alabama a second-tier branch because legislators can’t call themselves into special session. Legislators need to be able to deal with issues as they arise, he said.

As for the Certificate of Needs Board, he argues that it discourages innovation, obstructs the free market and prevents people from getting the healthcare they need.

“Right now in the State of Alabama, there is a board that determines if a local city, town, or county needs access to healthcare,” he said. “The way this works is the Certificate of Needs Board looks at the application by a hospital, clinic, or surgery center and determines based on the availability of other such facilities in the area whether one is necessary.”

Messer said the board can keep a new hospital, clinic or surgery center from being built in an area.

When it comes to voter integrity reform, Messer believes in passing two forms of legislation. One would keep voting machines from being able to connect to the internet.

“Second, we need to pass legislation that would create procedural audits of a percentage of precincts each election to ensure the precincts are correctly doing business and our elections are secured,” he said.