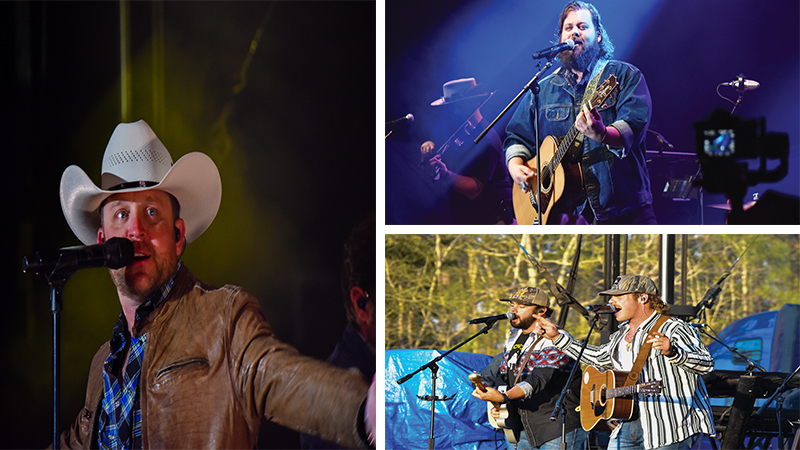 Back in December, when 423 Productions announced country superstar Justin Moore would be headlining a show at The Oaks Farm on April 2, you could feel the excitement begin to build.

On Saturday, that excitement hit its peak as the tour buses and an 18-wheeler dawning a Justin Moore wrap rolled down Veterans Memorial Parkway. Thousands of people descended upon LaFayette for a concert that will be remembered for months, possibly years to come.

In a town with a population of just south of 3,000, The Oaks Farm housed that many for nearly 12 hours, according to concert promoter Chase Bass with 423 Productions.

“Saturday night we put right at 3,000 people on a farm in a small town with a population of less than that,” Bass told the Valley Times-News. “When I say ‘we,’ it means all of us. The sponsors like Buffalo Rock Pepsi, Smith-Raymond Co, PFM, BEC, Greater Valley Area Chamber of Commerce, and others. It took every one of our staff from Event Production, Premier Entertainment Group, DSI Security, Straightline Parking, our bar staff, and The Oaks Farm team to pull it together.”

Autaugaville’s own Shackelford Lane kicked off the concert, followed by Burgin, Kentucky native Dillion Carmichael, with Moore finishing off the night by playing a mixture of his hits and new songs for two and a half hours.

“I wanna thank the artists: Shackelford Lane, Dillon Carmichael, and Justin Moore for taking a chance on a little town in the middle of nowhere,” Bass said. “I’ve worked with Justin Moore numerous times over the years, and when I tell you he did something for us Saturday night that I’ve never seen before, I mean it. He’s always given it everything he has when he steps on stage, but Saturday, he gave our crowd an extra hour. You don’t see much more than an extra song, if that, these days. An extra hour…that’s unheard of. Justin is different. He’s got a sense of pride in what he does and respect for the people that show up to hear him.”

Mary Stewart and her husband Stanley drove nearly five hours from their home in Biloxi, Mississippi, to see Moore and said this had been their fourth time seeing him perform.

“[Justin] speaks to the core of every hardworking American and his show solidified what we already knew; he is the man,” Stewart said.

From one end of the farm to the other, people sang, laughed and danced to familiar and even unfamiliar songs as Saturday turned to Sunday.

“Dillon Carmichael won a bunch of fans tonight. I had no idea who he was, but I have already added his music to my playlist,” Blake Eubanks from Eufala said.

For Bass, the fans made the night as unique as it was and said without them, there is no ‘Party in the Patch.’

“Speaking of the people that show up, wow,” Bass said. “Every person that bought a ticket and gave us a chance — thank you. None of this happens if you don’t continue to show up and make memories. We hope you made some great ones Saturday.”

The fans weren’t the only ones left with a lasting impression Saturday. Moore himself says the show was as good as it gets.

“It was a great show — beautiful setting and the crowd was awesome! Can’t wait to get back there again,” Moore said. “It’s always a fun time in Alabama, and this show was as good as it gets. Thanks to everyone who made it out!”

Likewise, Carmichael was impressed by what The Oaks Farm had to offer him as a performer and can’t wait to return.

“The Oaks Farm is an incredible venue,” Carmichael said.  “The folks that own and run this place are as good as they come. When I say we had the time of our lives, that’s no joke!”

Carmichael was also appreciative of having the opportunity to share a stage with Moore and thought Moore sounded incredible.

“Justin Moore sounded better than ever, and I loved getting the chance to join him on this show,” Carmichael said. “I am such a fan of the venue — and my buddy Justin Moore. Can’t wait to come back soon!”

While some chose to get a jump start on traffic, many stayed until Moore was finished, and for a venue in a small community on a two-lane road, traffic moved pretty well on the way out.

According to Sheriff Sid Lockhart, Chief Deputy Richard Carter said there were no major traffic issues, and for such a large crowd, everything moved smooth.

Bass said this will not be the last time we hear from 423 Productions as the promoter looks to have more shows at The Oaks, including more in 2022.

“Yes, we are bringing more shows to The Oaks Farm,” Bass told Valley Times-News. “Yes, there will be more this year. We plan to start bringing 5-6 a year to the property. Keep supporting us and 423 Productions will continue to bring the noise.

Bringing what might be the largest concert ever to grace the confines of Chambers County comes with a lot of support, and for Bass, that support starts with family.

“Family…that’s what’s it’s all about,” Bass said. “The name ‘423 Productions’ comes from my son, JW Bass’ birthday 4/23. The logo is a motivational symbol to me every time I see it or say the name. I can’t thank my family enough for their support. Especially my brother Thomas, my parents, Jennifer (Moana), Brandon, and Laura. They always have my back. Love you all.”