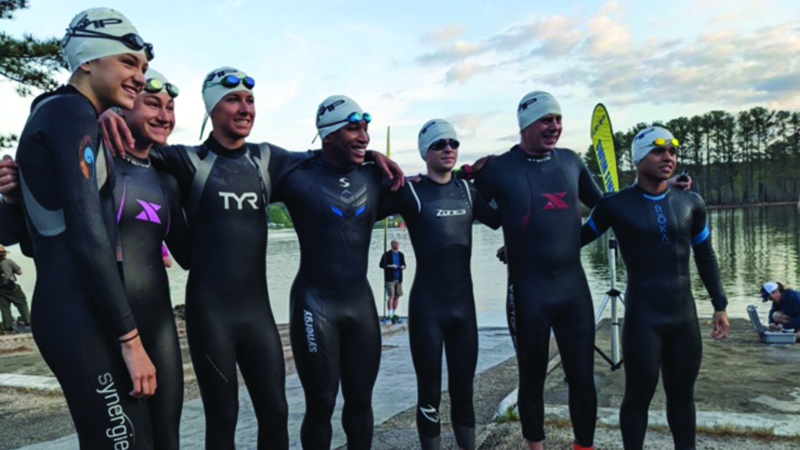 Ready for a swim: Swimmers participating in this weekend’s West Point Lake Olympic Triathlon and Aquabike pose for a photo. Photo contributed.

On Sunday, a large crowd of people gathered at R. Shaefer Heard Park in West Point for the West Point Lake Olympic Triathlon and Aquabike, a competition managed by Georgia Multisports Productions.

“The order is to swim, bike and then run,” he said. “We had two different triathlons going on at the same time. One was the sprint, and it was about 600 yards in the water and then 15 miles on a bike and then a 5K. The other was an Olympic distance, which was a 1.5K which was about a mile. Then, they biked 40K which was roughly 25 ½ miles, and then they ran a 10K which was 6.2 miles.”

He explained that the aquabike competition involved swimming and riding a bike. Aquabikers swam the 1.5K and biked the 40K.

“One time, we had a lady who said she couldn’t find an aquabike, so she didn’t know if she could do the race,” he said.

The Olympic overall male winners, according to the GMP website, https://www.gamultisports.com, were Javier CentenoNieves with first place, Scott Gentles with second place and Rodney Scioneaux with third place.

He said it went as planned and that there were plenty of volunteers present.

The event was sanctioned by USA Triathlon, the national governing body for the sport of triathlon.  Georgia Multisports Productions is an event management company specializing in triathlons, according to its website. Rainey founded it in 2004.

“I’ve always been a triathlete, myself,” he said. “Since they began, I started doing them. And then I was at a club, and the club was [going] to produce a triathlon, and I had some experience putting on a couple of road races, so I said I would be race director, and I kind of got hooked into it. I’ve been doing it ever since.”