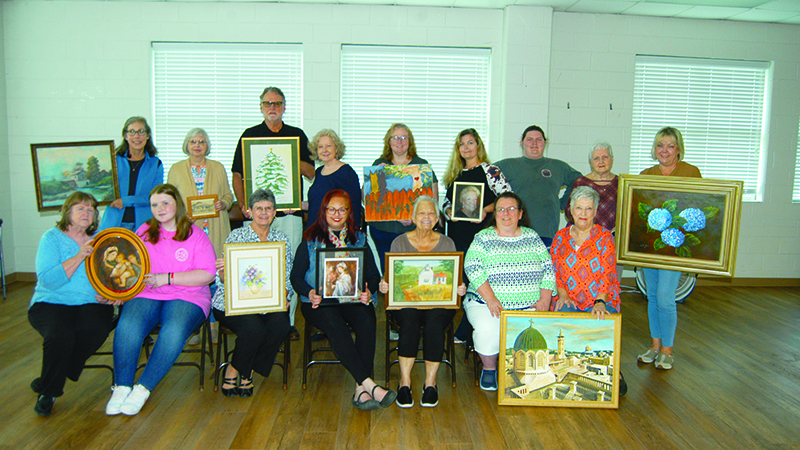 VALLEY — There has been much response to Valley Arts Council’s plan to have its first-ever memorial art show featuring the works of local gifted artists who have passed away. Descendants and friends of those artists have shown a lot of interest in having art creations by their loved one exhibited in a local show. The arts council’s memorial show will be taking place on the weekend of June 11 and 12 at Valley Community Center. The displayed artworks will include photographs of the late artists and background information on them.

In a Wednesday afternoon meeting in the Community Center’s Hood-Gray Room, family members and friends of deceased artists showed some of the works that will be on display and talked about their loved one’s passion for artistic expression. Bill and Wiky Gladden of West Point were there with a large acrylic artwork by Bill’s mom, Frances Gladden. It shows a potted geranium and is so well done it looks like an enlarged photograph.

The daughter of a college professor, Frances Baker (Gladden) was born in Arkadelphia, Arkansas in 1917. The family later moved to Atlanta, and young Frances was able to spend time in New York and even in Berlin, Germany prior to World War II. In 1941 she married Dr. Joseph R. Gladden. They had three children: Joe Jr., John Baker and William Cary “Bill” Gladden. Besides being a wife, mother and community volunteer, Frances was an artist. She started as a medical illustrator, doing post-graduate work at Vanderbilt University illustrating medical textbooks.

“She captured so much beauty of the world on canvas,”  Bill said. “She would go with my dad on fishing trips and spend her time sketching and painting. She even took a trip to the Greek islands and painted some beautiful artworks in water color. Most of all, we remember her for her flowers. She couldn’t wait for spring every year so she would have some new subjects. All over the Valley you can see her reflections in her art. She spent many hours learning, teaching and creating. For this, we are so thankful that Frances was given the talent to share God’s beauty of creation with the world.”

Artworks done by another world traveler will be on display at the show. Patty Scalf was at the Wednesday meeting with a painting by her late husband Dee Scalf. They spent much time in the Middle East doing missionary work. Mr. Scalf painted many Middle Eastern scenes he saw. His paintings of Jerusalem depict such scenes at the Praetorium, where Jesus took up the cross; the Church of the Holy Sepulcher, the wailing wall, the Al Aqsa Mosque and the Dome of the Rock.

Pam Gibson and Mia Breland were there with a portrait of Mary and the baby Jesus done by Anna Ruth Sands Gibson. She was Pam’s mother and Mia’s grandmother. Gibson was born in 1909 and was a native of the Riverview community. She attended school in Riverview and went on to attend LaGrange College. She taught art for many years in Riverview. She loved painting figurines. There’s a photo of her in one of The Westpointer magazines decorating a float for a West Point Christmas parade.

Debbie Williams was at the Wednesday meeting with a framed painting of flowers by her late mother, Mary Morgan. She was born Mary Ussery in the Bacon Level community of Randolph County and graduated from Handley High School in Roanoke. After high school, she married Curtis Morgan, and they made their home in Roanoke. They moved to Fairfax in 1964.

“Her love of flowers — and much hard work — resulted in beautiful gardens at their home on Greenberry Circle,” Williams said. “All of her formal art instruction occurred after her retirement from the Sears Catalog Store in Lanett in 1981.”

“I met Gena when I was 16,” Newsome said. “She was my youth group leader in our church. Gena was very active in the church and in community programs like the Boy Scouts. Her son, Matthew, was a Cub Scout at the same time my son was. We were den mothers together.”

“Gena loved to paint, crochet and to do just about any crafting project she could find,” Newsome added. “She always had a great eye for things that were beautiful. Gena was my friend and was friends with many people in the community. She was 62 when she died, and we still miss her.”

An avid local historian, Judy Bledsoe has arranged for some works done by Langdale natives Leon Duffey and Dan Parkman to be on display at the upcoming memorial art show. One of Parkman’s paintings goes back to 1927, when he was in elementary school in Langdale. He would go on to create some of the iconic images the Langdale Kindergarten (a.k.a. The Cotton Duck) is known for — the rabbits and the ducks.

William and Brenda Howell of the Birmingham area were in town Wednesday to loan one of William’s mom’s paintings to the show. It’s a framed painting of a decorated Christmas tree and is treasured by the family. William’s mom, Mary Howell, was a native of Chambers County’s Penton community. She married and moved to Fairfax, where William grew up. “She loved to paint, especially with watercolor,” he said.

“She was a well-known artist in Chambers County in the 1940s and 1950s,” Morris said. “She taught art at LaGrange College for several years. Frances was married to Cecil Carroll. In 1951, they adopted a newborn baby boy and named him Donald Cecil Carroll, calling him Don for short.

“Frances and Cecil had a great life with their careers and raising Don,” Morris said. “Frances loved to paint, and Cecil was a well-known local photographer. They worked together to do many paintings and pictures,” Morris said.

Some of Cecil Carroll’s best-known images include scenes from the Christmas merry-go-round when it first started and other familiar holiday scenes in the Valley. He took the photo of Langdale Meadow that hangs in the stairwell of LaFayette Lanier Theater.

Anita Bowles, daughter of Clinton “The Walkin’ Man” Kirk, was there to talk about some of her dad’s artworks. Mr. Kirk was gifted as a folk artist. He loved to make cars and houses out of popsicle sticks and went into great detail in doing it. He would fashion chimneys out of small, glued together river stones and would cut the scales off of pine cones and have them as shingles on the roof. Mr. Kirk loved to see the reactions of his friends when he presented these amazing items to them as gifts.

On March 15, 2010, Mr. Kirk was given a key to the City of Valley at a council meeting. He got his nickname from his love of walking for exercise in the Todd Addition neighborhood where he lived. It kept him going into his nineties.

For years, Mrs. Mason and her husband, Evan, ran the Village Curb Market on Highway 29 between Shawmut and Langdale. Mrs. Mason taught art and had many of her paintings on display in local art shows put on by the Valley Arts Council.

Arts Council President Suzie Britt had some artworks done by her mother, Betty “June” Brown Wheat, who passed away at age 90 last June.

Wheat was a graduate of the University of Georgia in Art Education and Design. She taught in the Atlanta City School System for a number of years and finished her teaching career at Southern Union State Community College. She was an avid animal activist and helped in any way she could in protecting and aiding animals and pets.