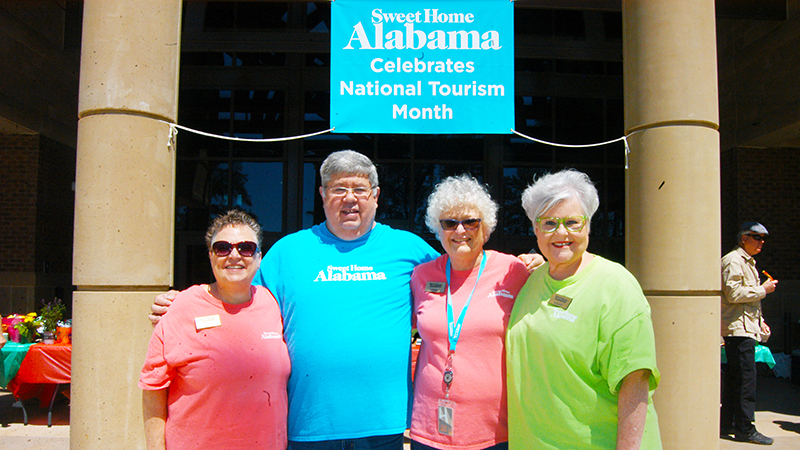 Welcome center staff: The staff of the Alabama Welcome Center, located off I-85 in Lanett, had a very busy day on Thursday. From 10 a.m. until 3 p.m. EDT, they hosted Tourism Day. From left are Welcome Center Manager Laura Smith, Greg Greenia, Linda Adams and Melinda Edwards. Photo by Wayne Clark.

LANETT — The hundreds of out-of-state visitors who stop at the Alabama Welcome Center every day were treated to some old-fashioned Southern hospitality, free food and live entertainment on Thursday.

Thursday, May 15 was Lanett’s turn. The welcome center staff directed by Laura Smith outdid themselves in making visitors to the state feel special. There was something there for everyone.

Chief Deputy Richard Carter grilled an estimated 750 hot dogs for those stopping by, and Donna Bond and Brittany Boatman of Sunny’s Restaurant, Valley, had some Southern treats like collards, cucumber salad and sweetbread with raisins ready to serve. Pizza, chicken fingers and Coke products were available.

John Lott did some classic country/classic rock karaoke. Melinda Edwards of the welcome center staff sang a well-received duet with him. The big crowd in front of the center and those coming and going joined in with them to sing “Sweet Home Alabama.”

The Whistle Stop Pickers from Lee County were there to play some old-time music on dulcimers. Deborah McCord is the spokesperson for the musicians. Her husband, Allen McCord, has four dulcimers, one of which he fashioned from a black walnut tree that had been growing in their yard. The bridge and tuning pegs are carved from a deer antler. It’s a special instrument. When Allen isn’t playing it, it’s on display in a case at the Loachapoka Museum.

Other members of the Pickers playing on Thursday were Steve Chun, Mike Thurman, Beverly Sandberg, Amanda Borden and Lee Borden.

When the Pickers are having a jamming session, all kinds of instruments join in to make the sound of early America. In addition to dulcimers, guitars, banjos, autoharps, fiddles, bass fiddles and penny whistles join in.

“Our mission is to carry on the tradition of old-time music,” said McCord.

Members of the group are supporters of the Lee County Historical Society, They frequently play inside the LCHS Museum in Loachapoka.

Most east-central Alabama counties were represented at the booths set up on the welcome center grounds. Executive Director Carrie Royster and Tarin Parrish of the Greater Valley Area Chamber of Commerce were giving away a variety of items with the GVACC and “Strength Woven In” logos on them. They included koozies, hand sanitizer, chapstick, hand wipes, pens, and golf tees.

Leisel and Holly Caldwell, a mother and daughter from Wedowee, were there to promote Lake Wedowee Life magazine and its companion publication, Alabama Small Towns and Downtowns. The latest issue has articles on the best places to go birdwatching, the Alabama flower movement, destination shopping in Alabama’s small towns and how the Old Waters Inn went from being an eyesore to a new business that helped revitalize downtown Wedowee.

Sandra Fuller was there to talk to people about Tallapoosa County and the Lake Martin region. With more than 800 miles of shoreline and a great reputation for fishing and water fun, Lake Martin is a very powerful tourism draw.

“We have a songwriter’s festival that draws a lot of people,” Fuller said.

The Harold Banks Canoe Trail is a popular destination for those who enjoy outdoor adventures. It’s especially popular in May when the Cahaba lilies are in bloom. The trail is in three sections with the first one starting in northwest Chambers County at Bibby’s Ferry. It’s a 8.25-mile, five-hour float ending at Germany’s Ferry. The second section starts at Germany’s Ferry and heads south some 9.75 miles. It takes approximately six hours to make the public access at the bridge at Horseshoe Bend. The final section is considered by many to be the most scenic. It goes some six miles, taking about six hours to reach the opposite end. It starts at the Horseshoe Bend bridge and ends at Jay Bird Creek public access. The third section has more patches of Cahaba lilies and has more frequent sightings of bald eagles.

An upcoming event on Lake Martin fishermen are really excited about is a chance to catch a tagged fish that can win some major prize money. The contest started April 1 and goes on until July 4. Several hundred fish have been tagged, and anyone who is registered in the contest and catches one or more tagged fish is eligible for a prize. There’s one fish in Lake Martin that’s worth one million dollars to the fisherman who reels him in.

Leigh Ann Lovell, assistant general manager, and Zachary Whatley, human resources assistant of Hampton Inn by Hilton, Auburn, were there on Tourism Day to talk about the lodging industry in Lee County. Auburn Hospitality is now hiring for such locations as the Auburn Lodge near the University, Candlewood, the Hampton Inn, the LaQuinta Inn & Suites, two locations of the Holiday Inn Express and the Microtel Inn & Suites and the Comfort Suites, both in Columbus.

Lynne Haven, director of sales for the Lanett Hampton Inn & Suites, said that business had been holding steady at the hotel. It does especially well on weekends when Auburn hosts football games or when a major tournament is taking place at Valley Sportsplex. There’s a senior softball tournament there this weekend.

During the noon hour, Lanett Police Chief Johnny Wood spoke by microphone to welcome everyone to Lanett Tourism Day.

“On behalf of Mayor Jamie Heard and the Lanett City Council I welcome you here today,” he said. “Thank you for being here. We think this new welcome center is a model for the entire state. I invite you in to check out everything. The welcome center staff can tell you anything you want to know about the state of Alabama. If you ask them something they’d don’t readily know they can quickly look it up for you.”

“We thank them for the support and protection they are so good in providing,” she said. “We also thank our DOT workers. We couldn’t do anything without them.”

The Alabama Department of Transportation has an office on the welcome center grounds. It’s manned 24 hours a day, seven days a week.

They see that the restrooms are open and are there in case of an emergency. 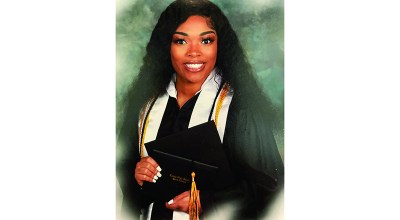