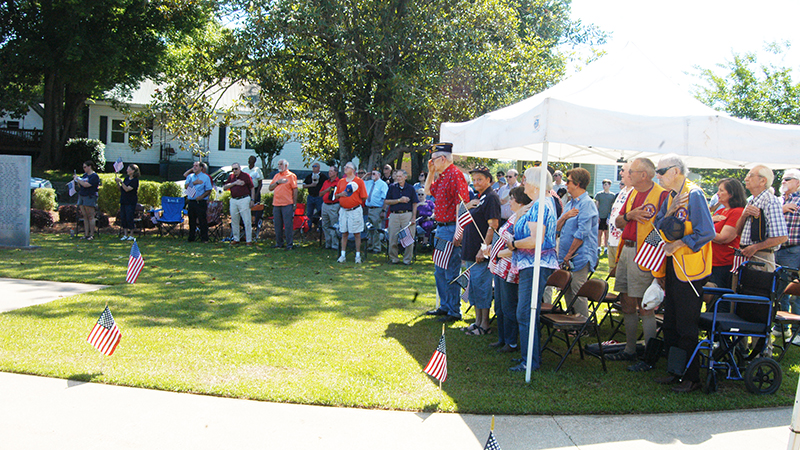 VALLEY — Some local men who died in the Vietnam War were remembered by name in Monday’s annual Memorial Day program at Veterans’ Memorial Park.

Memorial Day weekend is all about celebrating the summer season for many people. What’s now observed as Memorial Day began in the years following the Civil War. Soldiers who had died in both North and South were remembered on May 30th of each year on what was called Decoration Day. Following World War, the name was changed to Memorial Day and became a federal holiday in 1971.

As they arrived, a card was given to those attending Monday’s Memorial Day program. It said: “A veteran is someone who, at one point in their life, wrote a blank check to the United States of America for an amount up to and including their life.”

“There are 93 names on the four monuments we have in this park,” Bledsoe said. “These are more than just names. Each one is someone who grew up in the local area, went off to war when they were young and never returned home. Their death left a void in the lives of their family, friends and loved ones.”

There are 72 names on the World War II monument, six on the Korean War monument, 14 on the Vietnam War memorial, and one on the Afghanistan/Iraq monument.

On Monday, the lone soldier from the local area who served in that most recent conflict was killed 15 years ago. Sgt. Brandon Hadaway was the crew chief on a Chinook helicopter shot down in Afghanistan on May 30, 2007.

“I want to thank all of you here today for coming out and recognizing what this day means,” Bledsoe said. “Sadly, a lot of people in our country don’t seem to care about honoring those Americans who died for our country.”

The program opened with everyone standing and saying the Pledge of Allegiance. Gary Harris then played the National Anthem on the trumpet, and Post Adjutant Newton said the opening prayer.

Substituting for Mayor Leonard Riley, who was out of town, City of Valley Mayor Pro Tem Jim Jones said he was glad the city was making it a priority to have Veterans Park clean and beautiful. “We are so proud to have this memorial park in our city,” he said. “It’s important not just for Valley but for the entire local area. I want to thank each one of you for being here today.”

Bledsoe noted that the park monuments include each service member’s name, hometown, age, branch of service and the place and date they died. “I’m sure all of these men expected to return home when they joined the service,” he said. “One of my heroes when I was growing up in River View, was a baseball player named Stanley Anthony. He was from River View and played for the Opelika Owls in the Class D League. The Korean War had started when he received his draft notice. Some of his friends who had gotten their draft notices joined the Navy and wanted him to join them. At that time, joining the Navy meant a four-year commitment. He preferred staying in the Army, which meant he could stay for just two years.”

“All of us who served expected to return home, but some did not,” Bledsoe said. “Some of us went to places we’d never heard of before and never wanted to go back to. Those of us who didn’t come back left a void in the lives of those who had loved them.”

Newton and Leak both had size problems in the military, Newton being too small and Leak too big.

“I was only five-foot-six and 117 pounds when I joined,” Newton said. “The rifle range must have been made for guys who were six-foot-two. I had to stand on a crate when I fired at the target.”

Leak said he did some slouching when he was measured for helicopter duty. Pilots were supposed to be no taller than six-foot-two.

Newton said he didn’t know Dean Monroe that well but was well acquainted with some of his cousins and close friends. “He had a great personality,” he said. “Those who knew him loved him.”

Newton said he did talk with Monroe just before he went to Vietnam. “He told me he wanted to do what was expected of him and then come back home to the good life,” Newton said. “He was one of those who didn’t make it back, and that’s so sad.”

Billy Gross was another man from the local area who didn’t return from Vietnam. “He was the brother of Bennie Gross, a former Valley police officer,” Newton said. “He had a young daughter when he left for Vietnam. I knew her when she had a job working on West Point Lake. Billy had been in Vietnam a good while before he died.”

Newton said the names on Veterans’ Memorial Park monuments should not be forgotten. “They died for their country.

“Those who died left a hole in people’s lives,” Leak said. “I cannot imagine the hurt a family feels when a son or daughter does not come home. I cannot imagine what they are feeling when that folded flag is presented to them at their loved one’s funeral.”

Leak said he had worked with Lewis Callaway before going to Vietnam. At the time, they were budding draftsmen for WestPoint Pepperell and each had ambitions to go to college. “Our generation considered whether to join or be drafted,” he said. “Some went to Canada to avoid the draft. Lewis was a kind, gentle person who could make friends with anyone. He wanted to serve in the military and come home to a good life.”

Leak said he later learned that Callaway served in the infantry when killed while walking point for his squad. “He was a sergeant when he was killed,” Leak said. “That was an accomplishment for someone who was drafted.”

Leak said another person he would never forget was someone he served with. His name was Don Kilpatrick. He was 25 years old at the time and was from the Pittsburgh, Pennsylvania area. He was married with young children when called to duty. “He was one of the finest people I have ever known,” Leak said. “My best friend, Warren Willis, was flying with him that day, and I was in a helicopter behind them.”

Kilpatrick was killed when struck by machine gun fire from the ground.

“We had a memorial service for him the next day,” Leak said. “He left a wife and newborn baby back home.”

The baby was named Don Kilpatrick Jr. He would grow up to follow his father’s footsteps and serve in combat. He was awarded a silver star for bravery in the Gulf War. Kilpatrick Jr. later took that medal to the Vietnam Veterans Memorial in Washington, D.C. and left it under his father’s name. It’s now in the National Archives.

Whether on one of the four monuments in Veterans Park are on a much larger memorial, such as the famed black wall in the nation’s capital, each name belonged to someone special to those who knew them. “They were real people who died and left an empty space that could not be filled in someone’s life,” Bledsoe said. “There comes a time when we need to stand up and honor people. Those who served did their part, especially those who did not return home. War leaves many kinds of victims. Some are killed, some survive wounds that will cause them problems for the rest of their life, and some come back with bad memories that will haunt them for the rest of their life.”

Bledsoe said that life in the U.S. is very different from how things were when he was growing up in River View. “I was nine years old when World War II ended in 1945,” he said, “but I can remember the impact it had had on our community. It seems like all the men of the town were away in service, and everyone was worried about their family member or members who were serving in the military. It’s not like that today. Not that many from today’s generation are serving in the military. I can remember being in the Marines and serving under officers who had served in World War II and Korea. They were serious people who wanted everything done the right way. They had served alongside men who died in combat. They knew what their sacrifice meant. There aren’t many people like that today. Not many people know what sacrifice means.”

Bledsoe said he didn’t like what was going on in the country today. “Those who died in our past wars died for something and on days like today, Americans should turn out in large numbers to show some appreciation for what they did,” he said.

American Legion Post 67 meets at 6:30 p.m. EDT on the second Tuesday of every month at Sunny’s Restaurant, located on Fairfax Bypass in Valley. All local veterans are welcome to attend and join if they’d like. At the May meeting, members of the Legion packed two care packages and sent them to a young man from the local area who is serving abroad with the U.S. Marines. Some more personal care items were sent to the Bill Nichols Veterans Home in Alexander City.