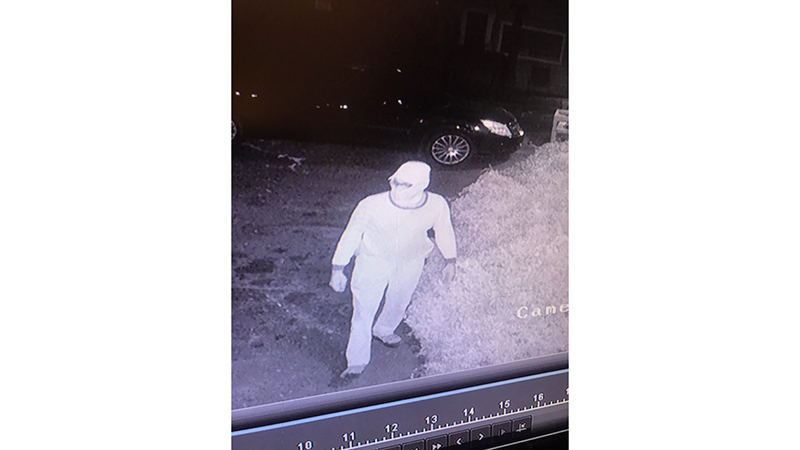 Up to no good: Security footage from outside Roger’s Bar-B-Que makes the robber look like he's wearing only white clothing. Restaurant co-owner Debbie Williams said he appeared to be wearing a dark blue shirt from footage taken inside the building. Photo contributed.

Roger’s Bar-B-Que in West Point is co-owned by Wayne Williams and his wife, Debbie Williams. Debbie Williams described the assisting business owners as friends she has known “forever.”

“They know it shouldn’t have happened,” she said.

The robbery was recorded by security cameras. Williams said the suspect’s vehicle was caught on video and that the West Point Police Department is trying to see its tag.

The business was closed when the robbery happened. All but three employees had left for the day. The robber got in through the back door after waiting there for about 12 minutes, Williams said.

Two of the employees, Shane and Shelly, were husband and wife. Shane planned to pull their van up to the door so Shelly wouldn’t have to walk far to get in it.

“When Shane went to go out that door… the door pops open,” Williams said. “But from the outside, you can’t open it. It don’t have a handle or nothing on it. And he said that just as he opens that door, this guy pulls a gun on him. Shane sort of wrestles a little bit with him at the door. And then when he pulls a gun on up, Shane stops. They didn’t realize until the whole thing was over and the police had come and gone … the clip had fallen out of his gun. The clip was at the back door. And you could see it on the video.”

The robbery lasted between four and five minutes, Williams said.

“[H]e took Shane in the kitchen and got the other two and brought all three of them back into the dining room up to the register,” she said.

The robber had Lindsey, the waitress, get money for him from the register.

“He said, ‘I know there’s got to be more than this,’” Williams said. “He said, ‘Where’s the office?’ … So she brought him in the office and gave him the rest of the money.”

“It wasn’t worth what he put everybody through, that’s for sure,” she said.

Williams and her husband were at a food show in Florida during the robbery. As soon as they heard about the robbery, they returned to West Point.

“We was just happy he didn’t kill them or hurt them,” she said. “I’m just sick about it. I cried about it all day long yesterday. I think it’s really, really, really hit me that they could have got killed. They said when he made them lay on their stomachs back there in that kitchen, you could see it on the camera. They said they thought that was it.”

When Shane found his cell phone, he tried to call 911 only to find that the police were already in the front parking lot watching for speeders, Williams said. He ran outside and told the police what had happened. By that time, the robber had gone up 9th street to an unknown location.

Fortunately for Roger’s Bar-B-Que, the response from community has been overwhelmingly positive, Williams said.

“We were so busy last week I didn’t have enough people,” she said. “The community has been been wonderful to me. I see how much they really love us here. We’ve been in business since 1945, and I’ve been working here for almost 34 years. This month will be 18 years that we’ve owned Roger’s.”

Williams said this was her restaurant’s first time being robbed.