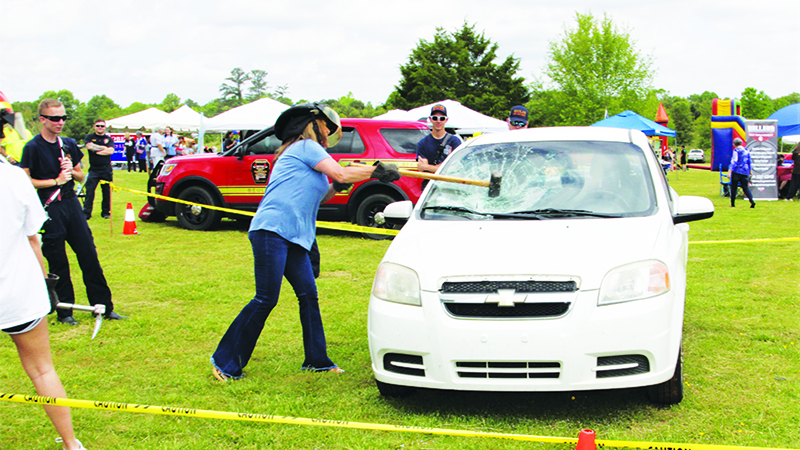 Car smash: One of the main attractions at this year’s Beulah Family Day was the car smash shown above. Photo contributed.

While the turnout was lower than he had hoped for, Beulah Friends of the Community President John Findley thinks this year’s Beulah Family Day was a smashing success, literally. One of the attractions was a car smash held by the Beulah Fire Department in which participants got to hit non-drivable cars with a sledgehammer. It raised money for Findley’s organization.

In addition to bouncy houses for children and several vendors selling all sorts of goodies, there was a car show with 28 entries. One of the highlights of the car show was a self-propelled 1880 Wirt & Knox firefighting hose cart from Childersburg.

Many people attended the event, including several politicians running for public office, cheerleaders from Beulah High School, and a Navy recruiter. Findley commented that the politicians, which included Senator Randy Price, Rep. Debbie Wood, Micah Messer and others, were all warm and friendly people.

Findley said that whereas the previous Beulah Family Day was held in the fall, Beulah Friends of the Community decided to hold this one in the spring so the weather would be cooler. He gave a special shout-out to the Delta chapter of Alpha Phi Omega National Service Fraternity at Auburn University for helping with the event. He emphasized that it takes a community to put on an event like this.

The event was hosted on the grounds of The Bridge Church, which also provided logistical support.

Findley’s favorite thing about the event was the people.