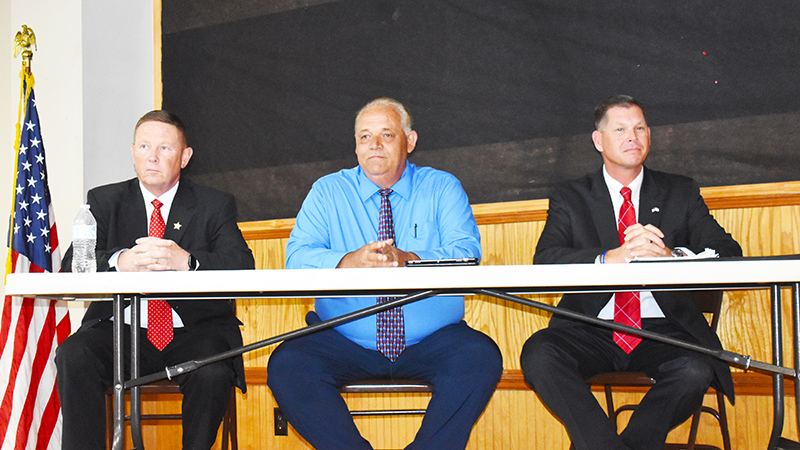 With Sheriff Sid Lockhart announcing his retirement, Chambers County will have a new sheriff for the first time in 28 years.

On May 24, Republican candidates Jeff Nelson and Richard Carter will find out who will face unopposed Democrat candidate Jeff Blackstone in the general election to become the next sheriff of Chambers County.

The three met inside the ALFA building in LaFayette Thursday evening in front of a small crowd to answer a few questions given to them by Judge Calvin Milford, who served as moderator for a candidate forum. The forum was organized by Chambers County Republican Party President O’Neal Shaw, who said he was pleased with the forum and the turnout.

“I was actually very pleased. I thought we had a nice turnout. You never know. You know, it’s not RSVP. So we just always hold our breath. But I thought we had good interest,” Shaw told The Valley Times-News. “The sheriff’s candidates, I thought, did an excellent job.”

Each of the candidates thanked Lockhart for the job he’s done as sheriff but noted there is still room to grow and improve as a department. To do so, all three candidates agreed that salary and staffing were the two most important issues currently facing CCSO.

Nelson talked about many of the deputies having to take side jobs to earn extra money.

“Well, most of our deputies in this county have a side job,” Nelson said. “They’re working their job as a sheriff’s deputy in this county, and they’re also working a side job. Pay is very important to keep these guys in this office and working for this office. We’re going to have to pay them what they’re worth.”

Nelson alluded to a salary study performed by Evergreen solutions in 2021 that resulted in salary adjustments for all county employees, including the sheriff’s department, saying it was a start, but more must be done.

“Recently, the county has done a pay study and was able to get these guys somewhat of a raise, but not what these guys deserve,” he said.

Blackstone echoed Nelson’s sentiments and called on his salary during his early days as a deputy in 1994 to say he would be in front of the commission every chance he had fighting for increases in compensation of 5 to 10%.

“As far as the deputies [salary], I will be at the commission’s office, with meetings every time trying to get these deputies a raise,” Blackstone said. “I’m not only asking for 5%; I’m going to ask for 10%. These deputies, they can’t pay their bills. They have to work two or three side jobs. I know. I have done it. I was a deputy.”

While Carter agreed, he also acknowledged that it will be difficult, if not impossible, ever to pay deputies what they are worth, but he will not stop fighting.

“One of the things that we’ve always been faced with, I know in my 32 years, is pay,” Carter said. “There’s always going to be an issue. We will never be able to pay the deputies what they’re worth. And that’s unfortunate. Just like the military, you’ll never be able to have them paid what they’re worth. But we’re going to do everything we can do to get them as much as we can, while we can.”

Another need, Nelson says, is proper equipment, mainly vehicles. Nelson pointed out that the vehicles on the roads are approaching 200,000 miles, something he said needs to be addressed.

“They’re in and out of the shop left and right,” Nelson said. “They’ve increased the budget for maintenance just on the patrol cars to $90,000 right now at the sheriff’s department to keep their vehicles maintained and on the road. So, I need to get them the equipment they need.”

Carter agreed that new, more reliable vehicles were needed. He also pointed to the difficulties in getting vehicles nationwide and said CCSO was approved to purchase vehicles last year but was unable to due to nationwide shortages.

“We do have problems with getting vehicles right now. It’s a nationwide thing,” Carter said. “We’ve got approved to get cars last year, but you couldn’t get them. Chevrolet notified us [CCSO] the ordering process has opened back up, so we’re going to be in Fort Payne, Alabama, ordering some vehicles.”

In response to a question about lost revenue from the recent bill that will allow Alabamians to carry a firearm without a permit, all three candidates are hopeful that income will not take as much of a dip as it is projected due to gun owners wanting “peace of mind” and reciprocity when traveling in states that have not passed constitutional carry bills.

Blackstone also had ideas to offset that loss of revenue in the way of more fundraising events like the annual sheriff’s rodeo.

“We’ve got rodeo money that I’m going to use for deputies, though, completely,” Blackstone said. “But I was also thinking about doing another type of rodeo, like the barrel racing for women. They love it. That brings in a lot of money. Items like that that I’ll be able to do to make up the difference.”

Carter added that potentially tapping into the newly created grant may also be an option for CCSO once the law goes into effect on Jan. 1, 2023.

“When the legislators passed that law, they had enough foresight to understand that there are some small agencies who are going to suffer greatly because of it,” Carter said. “We’re talking a lot of West Alabama-type agencies. They also created a $500 million grant fund, if you will. It’s fully funded.”

How that works, Carter said, is that averages from 2019 and 2020 will be calculated. After the first quarter of 2023, the county can determine what the deficit will look like and submit an application in hopes of recouping some or all of that deficit.

Nelson, who said he pushed for the passage of House Bill 272, commended Lockhart on how he has spent permit money, saying there are still some funds left in the account, but those funds needed to be used sparingly.

“Sheriff Lockhart has done an outstanding job of handling that money,” he said. “He doesn’t waste it on things. He keeps it in the right places and uses it for what he needs it for. So there is a good bit of money still in that account. We’re just going to have to use it sparingly. We’re not going to be able to waste it.”

Nelson also said many of the citizens he has spoken with about constitutional carry, majority of them have said they still plan to purchase permits and said they tell him they will feel safer having that permit.

In his closing statements, Nelson encouraged voters to educate themselves before making a decision on who they intend to vote on. He challenged voters to review the budgets and state audits to find out how money is being spent throughout the department.

“Go online, pull up the budgets for the sheriff’s department. Don’t take my word for it. Go online and look at them, read it,” he said. “Another thing you need to do is go online and pull up the state audits for the sheriff’s department. You can go online right now and pull up 12 years of state audits and read them. It’s in black and white. The way they handle the money and what they do with the money — when it’s documented, it’s there. Do your homework.”

In his final remarks, Carter thanked everyone for attending and opened his door to anyone who wanted to dive into the financial data Nelson referred to and thanked the county for allowing him to serve.

“As Jeff says, all the information is online, but I invite you to come to my office. We’ll sit down, and I’ll break it out. I’ll open up the QuickBooks. I’ll show you everything that we have. We have nothing to hide. Never have. We’re proud. We’re proud of the work that we’ve done. You know, if you’re a citizen of this county, I want to thank you for allowing me to serve you for the last 32 years,” he said.

Although Blackstone is unopposed in the primary, he reminded everyone that on May 25 his campaign kicks off against either Carter or Nelson and he believes he is the right person to serve as the next Chambers County Sheriff.

“I’m running for the people of Chambers County. I love this county,” he said. “I believe I can do good for this county.”

At the conclusion, Milford expressed his gratitude to Lockhart for his service as sheriff for seven terms. As the audience gave Lockhart a standing ovation, he said he was honored to have been able to serve Chambers County and will be available to whoever is elected as his successor.

The full forum is available for viewing on The Valley Times-News Facebook page.