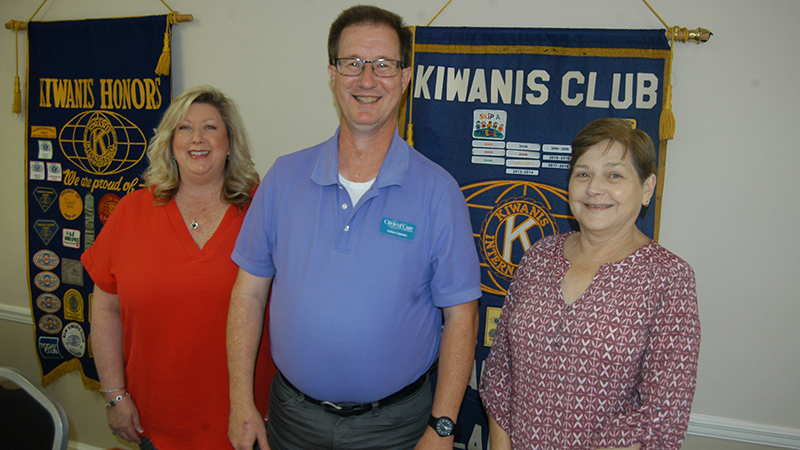 Discussing human trafficking: Adrian Carpenter (at center), a program supervisor for the Chambers County Circle of Care Center for Families, talked about human trafficking at Wednesday’s noon-hour meeting of the Kiwanis Club of Valley. At left is Karen Meadows, the program chair, and at right, Debbie Yates, club president. Photo by Wayne Clark.

VALLEY — Adrian Carpenter talked about a Circle of Care initiative that’s near and dear to him at Wednesday’s noon-hour meeting of the Kiwanis Club of Valley. Carpenter has been with the Chambers County Circle of Care Center for Families for more than 20 years now. He’s had a hand in much of what the Circle has done during that time, but the one program he’s most passionate about is Renew Hope 85, which deals with human trafficking along I-85 between Atlanta and Montgomery. FBI statistics on the subject are bone-chilling.

Human trafficking is a modern form of slavery, and it’s big business both in the U.S. and worldwide.

“It’s a $32 billion industry in the United States,” Carpenter said. “It brings in more money every year than does the NFL, NBA and Major League baseball. Human trafficking is a $150 billion industry worldwide.”

The pity of it all is that it’s taking place right under people’s noses.

“An interstate highway goes right through our area, and we are right on the state line,” Carpenter said. “That’s why we got involved in Renew Hope.”

One of Renew Hope’s first events involved a presentation by a young woman who had been trafficked in 48 states and in three foreign countries.

People are being trafficked for two primary reasons: forced labor and prostitution.

It has been estimated that more money changes hands in sex trafficking than in illegal gun sales.

“Some youth have been sold 10 to 15 times in one night,” Carpenter said. “This affects more than 24 million people. It’s estimated that at least 1,000 people are being trafficked in Alabama at any point in time.”

Everyone has the potential to discover a human trafficking situation. While victims may sometimes be kept behind locked doors, more often than not they are right in front of us at construction sites, restaurants, eldercare centers, nail salons, farm fields and hotels. There are indicators to look for, such as:

Human trafficking exploded with the widespread use of the internet. That’s how the contacts are made. In 2017, there were more than 640,000 online contacts involving sex trafficking in Alabama alone.

“We know it’s going on in Alabama,” Carpenter said. “The heat map I showed you shows the frequency of human trafficking calls. The state line on I-85 is a hot zone.”

It’s estimated that there are approximately 293,000 underage runaways every year in the U.S. Traffickers are looking for them and many times make them a victim. It won’t be a good life.

“They are being raped over and over again,” Carpenter said. “The life expectancy of someone being trafficked is seven years. Most deaths are by suicide.”

Many youth being trafficked come from broken homes. Some are being raised by a single mom who agrees for them to be trafficked to have money to support a drug habit.

“Some kids find their way to a big city,” Carpenter said. “They get there with no job and no place to eat or sleep. A trafficker is looking for young people of that description. They promise them what they need. They don’t have to kidnap them. With a minimal level of help, they will willingly do what the trafficker wants.”

It’s usually to be pimped out.

“Today’s pimp isn’t like the ones they used to have on Starsky & Hutch,” Carpenter said. “They look like anyone in the room.”

Human trafficking is preventable. Making progress toward doing that is the goal of Renew Hope 85, which is dedicated to empowering communities to educate, inform, and train community members and front-line workers in the issues relating to human trafficking. Renew Hope provides training for the frontline service providers such as nurses, teachers, law enforcement and churches.

Prevention is critical to Renew Hope 85’s mission. Awareness activities provide communities with opportunities to acknowledge the realities of human trafficking. Awareness walks, community presentations and media events are among some of the activities Renew Hope has initiated.

The Circle of Care will be hosting a meeting on Tuesday, May 30 to discuss this. It will be done in two sessions. One during the noon hour and one at 7 p.m. EDT. Both meetings will take place at the Circle of Care, located at 14 Medical Park in Valley. For information, contact the Circle at (334) 768-4091.

Carpenter grew up in DeArmanville, Alabama, not far from Anniston. He said he’d never forget his dad taking him on a hike to a high point of land overlooking the town.

“He asked me what sounds I could hear,” he said. “I told him I could hear the sound of the wind blowing and birds singing.”

The dad told him what he wanted him to hear was the sounds of the cars and trucks moving along I-20, which was in the valley below.

“If you ever get lost in the woods, follow the sounds of the cars to get back to safety,” he told him.

There’s some irony in that now.

“When I first heard that as many as 300 kids are trafficked between Atlanta and Birmingham along I-20, I thought about those cars my dad told me to listen for,” he said.