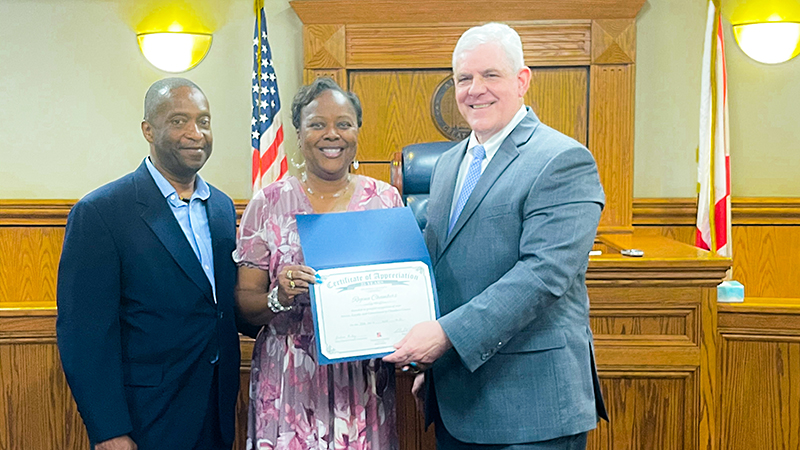 Recognition of service: Chambers County manager Regina Chambers (center) was honored by the commission for her 25 years of service to the county. County Attorney Skip McCoy (right) presented Chambers with a certificate as her husband Robert Chambers (left) looked on. Photo by Ed Pugh.

Chambers County Manager Regina Chambers was recognized Monday, April 25, for over 25 years of service to the county.

Having grown up in Chambers County and upon graduating from Lafayette High School in 1990, Chambers attended Southern Union State Community College. She graduated from Southern Union in 1992 and from there attended Auburn University until her graduation in 1994. After graduating from Auburn University, Chambers began working at Farmers and Merchants Bank until April 1997, when she took a position as an accounts payable clerk with Chambers County.

Some years later, Chambers became an office manager/county clerk. On July 1, 2015, she was promoted to county manager.

“I am very family orientated and being given the opportunity to work in Chambers County, there was no better opportunity to embark on,” she said when asked what prompted her to stay in her hometown.

As county manager, Chambers has had a firsthand seat to the change and growth the county has endured over 25 years. She’s seen the relationship between outside entities and the commission improve. She also said she’s enjoyed working with the current commission, which wants what’s best for Chambers County as a whole.

“The logo for the county ‘Strength Woven In’ emphasizes we are pulling together to be a stronger county,” Chambers said.

When asked what the upcoming generation can do to improve Chambers County, Chambers said they need to set goals and apply themselves.

“You have to want to do something to be effective and efficient,” she said.

There are many obstacles and disappointments that Chambers has had to overcome in her life to get to where she is, but Chambers did not let that prevent her from reaching her goals. She hopes that the future leaders of Chambers County will have the mindset, “Not only can I, but I will succeed.”

Chambers’ family members have stood beside her through all of her endeavors and continue to, but the one who she credits everything to is her Lord and Savior.

“Acknowledge God and let him direct your path. With him all things are possible,” she said.