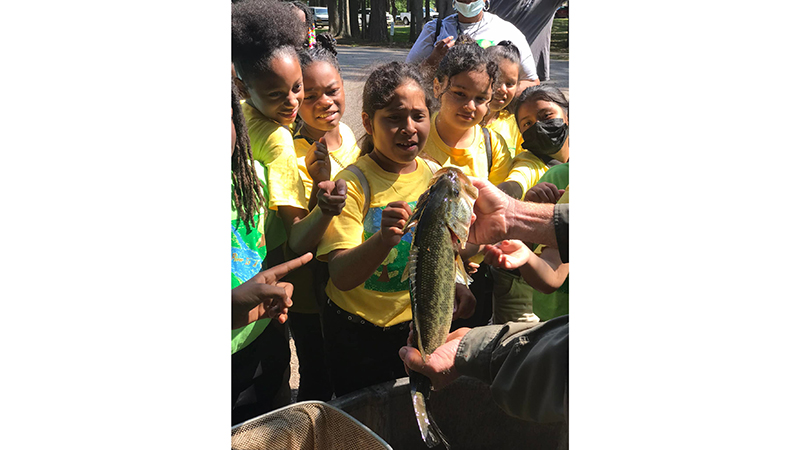 Effects of pollution: Students at the Chambers County Extension Office Groundwater Festival got to see fish up close and learn how they’re affected by water pollution. Photo contributed.

On Wednesday, fourth-graders from across Chambers County visited West Point Lake to participate in the Chambers County Extension Office Groundwater Festival in Hardley Creek Park. There were about 355 participants and chaperones.

County Extension Coordinator Rachel Snoddy said the event was done in a partnership between the extension office, the Alabama Department of Environmental Management, the Natural Resources Conservation Service and the U.S. Army Corps of Engineers.

“Our goal was to teach the kids about being good stewards of our water sources,” Snoddy said. “And so, they had several activities where they were learning about how to keep our groundwater clean. We had fish out there so they could learn about how wildlife are affected by polluted water. And we talked about the water cycle and how we don’t get any new water, so that’s why it’s important to keep the water that we have so clean.”

The highlight of the trip for the students may have been getting to interact with fish.

“We had a group from… the Department of Natural Resources went out on the Chattahoochee that morning and got some fish out of that river right there so the kids could see and touch and even kiss the fish,” Snoddy said. “The kids really loved that. I think that was probably their favorite activity that they did. They all were talking about it and had a lot of fun.”

A mascot named Bobber the Water Safety Dog, who was created by the U.S. Army Corps of Engineers, made a friendly appearance at the event.

Earlier in the year — Snoddy guessed that it was in January — the Chambers County Extension Office contacted fourth-grade teachers about an art contest based on the theme of healthy rivers.

The winning design was printed on t-shirts that students wore to the groundwater festival.

Snoddy said grant funding from the Soil and Water Conservation District and ADEM helped cover the costs of the event.

This event was the first of its kind. Snoddy said the Chambers County Extension Office plans to hold it every year for all Chambers County fourth-graders from both public and private schools.