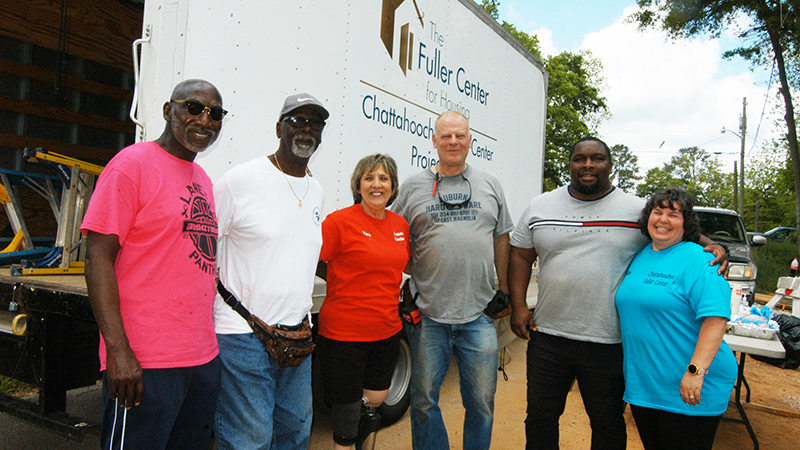 Under construction: From left, Lanett Mayor Jamie Heard, Oscar Davis (who will be getting one of the two new homes), CFCP Executive Director Kim Roberts, West Point Mayor Steve Tramell, Chambers County Deputy Loon Davidson (whose mother, Theresa Davidson, will be getting the other new home) and CFCP Assistant Director Robin Pierre. Photo by Wayne Clark.

LANETT — Lots of progress was made over the weekend on the construction of two new senior homes being built by the Chattahoochee Fuller Center Project (CFCP) in the Plant City neighborhood.

“Things went really well,” said CFCP Executive Director Kim Roberts. “We had around 30 people working on the two new houses. We should have both of them dried in by Wednesday.”

Dorian Lopez of Columbus had earlier poured the concrete pads for the two 800-square-foot homes and for a 300-square-foot tiny house that will be located next door on East 3rd Avenue to the two houses now under construction.

“The third concrete pad has the pre-plumbing needed for the tiny house,” Roberts said. “All we have to do is to move it from its present location in front of the ReUse Store. We would like to have a dedication ceremony when everyone’s ready to move in.”

The two new homes are being built for two local seniors who are in need of better places to stay. Theresa Davidson, 65, lost her home in a recent fire and has been staying in a local motel. Oscar Davis, 72, is in a home that’s in deplorable condition. The roof leaks, the floors sag and the house has no running water or electricity. Davis is a member of Goodsell Methodist Church in Lanett and drives local veterans to the VA Hospital in Tuskegee for their medical needs.

Local podiatrist Dr. Richard L. “Rick” Kuhn had a group of approximately 25 volunteers from the We Serve group from the Church of the Highlands in Auburn to work on the two houses. Some local volunteers joined them.

The local volunteers will be painting the Hardie Board on the exterior of the homes. One will be Trail Vine green in color and the other Pencil Sketch gray. Each senior home will have two bedrooms and one bathroom.

The Chambers County Circle of Care Center for Families will be placing a single mother and a child in the tiny house. It’s being seen as a transitional home where a mother and child can live until they can find a permanent residence. They will move out and another parent and child will move in.

While the current construction project is underway, Roberts and Assistant Director Robin Pierre are making plans for this year’s Fuller Center Legacy Build. It will be taking place Oct. 10-14 somewhere in the local area. Two new homes will be built that week by a large group of volunteers from both the local area and from out of town.

“By the end of the year, we will have built 75 new homes in Chambers, Troup and Lee counties,” Roberts said. “That’s amazing, and we’ll keep doing it as long as we are able to.”

One thing that’s keeping the homebuilding effort going is the continuing success of the ReUse Store.

“As long as people keep supporting our store, we can keep building,” Roberts said.