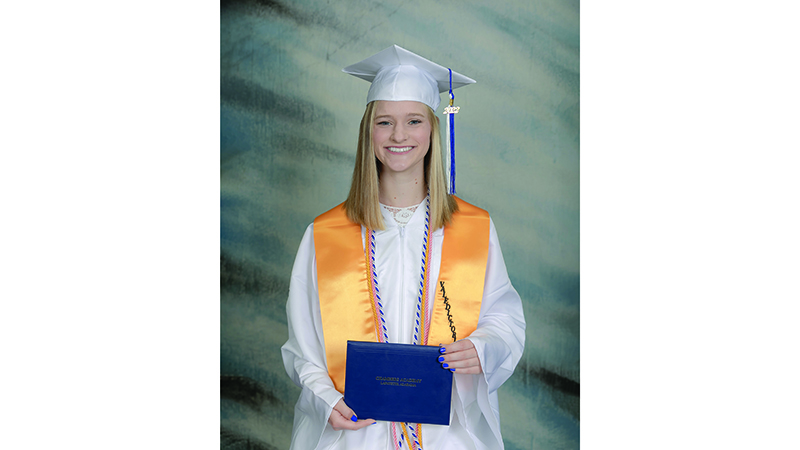 Mattie Reese is excited to be Chambers Academy’s 2022 valedictorian. She is already thinking about what she will say during her speech, noting she plans to share memories she has with her class.

“We had a classmate who passed away in the ninth grade,” she said, referring to former Chambers Academy student Jacob Crowe. “He left Chambers about a year before to go ahead and take online classes, but he still hung out with a lot of our classmates, and I want to make sure to mention him during my speech.”

Reese hopes her speech will be as memorable as that of her older sister, Tate Reese, who was valedictorian of a previous class.

“I still have people come up and tell me about how great her speech was,” she said. “She had people laughing and crying.”

The best thing about Chambers Academy, according to Resse, is that it’s like a family.

“I know a lot of schools say that, but it’s so inclusive, and I’ve known a lot of these kids since kindergarten,” she said. “I’ve known some of these people I’ve met within the last few years. I feel like they’re all like a family to me. It doesn’t matter how long I’ve known them; they’ve all been a great part of my life, and I’ve made memories with them all.”

While being chosen as valedictorian is a big deal, Reese is also proud of having participated in girls’ sports at her school. She has engaged in cheerleading and played volleyball, basketball and softball.

“I know a lot of times, it’s not looked on as important as the guys,” she said. “People don’t always come out to watch the girls, but these last couple of years, I’ve seen just as many people showing up for the girls’ games and the guys. I want to feel like myself and my teammates have made that difference and made Chambers more than just a football school.”

The instructor who has influenced Reese the most is her history teacher, Coach Tom Garrett, who she said taught her history “from both sides.”

“My parents definitely instilled in me the importance of grades,” she said. “When I was younger, I had my bedtime, and it was like either I could go to bed at 8, or I could read until 8:30. So they kind of instilled in me the love for reading, and I think that impacted my grades a lot.”

One obstacle Reese has encountered at Chambers Academy is that because it’s a small school, it didn’t offer her all the opportunities she wanted. For example, she said students there only take the ACT test once a year. Her mother pushed her to take it at other locations to improve her scores.

Reese said that being a competitive person is what drives her to succeed.

“Like, with the ACT testing, it was like I wanted to make it as high as my sisters did, so I would take it and try to reach where they are,” she said.

Reese hasn’t chosen a career yet.

“I plan to enter Auburn’s Exploratory program to kind of help decide because freshman can enter that course and just kind of see different options,” she said.

If she could tell future students anything about Chambers Academy, it would be that it’s an “absolutely wonderful school.”

“It’s helped make me who I am,” she said. “And like I said before, it really is like a family. The faculty cares about you, the teachers and administration. I mean, they’re there for you whenever you need them. … Every day when we come in the school, we have at least two to three people standing at the door saying good morning and holding the door.”

If Reese could tell give advice to future Chambers Academy students, she’d tell them to put in time to study, to not procrastinate and to always double-check their work.

Besides playing sports, Reese participated in several extracurricular activities. She was the Student Government Association treasurer and participated in the Beta Club, the Math Team, the Scholars Bowl and Campus Life, an organization run through Youth for Christ.

If she could change one thing about the world, Reese would have more people come to know Jesus.

“I want the gospel to be spread and people to take it seriously and not just think, ‘I can wait another day to get my life right with God,’” she said.

Like Chambers Academy’s 2022 salutatorian, Claire Allen, Reese was born in Opelika and raised in LaFayette. She said they have known each other since they were very young.