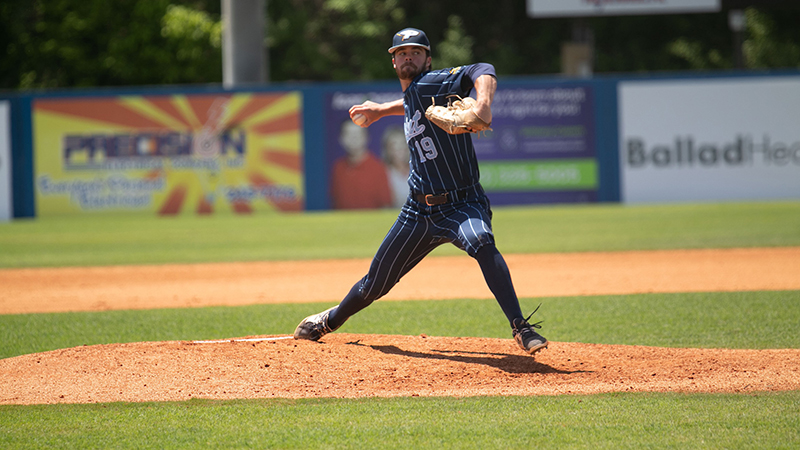 Firing one in: Point University pitcher Cole Brown fires in a pitch during the Skyhawks’ loss in the AAC tournament against Bluefield.

KINGSPORT, Tenn. – Point University baseball led 5-1 going into the sixth inning, but a late-inning scoring surge from Bluefield would change the momentum of the game, and the Skyhawks suffered a 12-7 defeat on Thursday in the elimination bracket of the Appalachian Athletic Conference tournament.

Bluefield was the first team on the scoreboard with a run off an error in the bottom of the first. Jhamante Woods answered for the Skyhawks in the top of the second with a solo home run, his eighth of the season. In the same inning, Kole Sonnier connected for an RBI single to score Francisco Garcia to help Point take a 2-1 lead.

The Skyhawks’ offense continued to stay hot in the third inning, as Alex Marquand and Jackson Bush connected for back-to-back doubles, with Bush scoring Marquand. An RBI single from Jaysen Dower would bring home Bush to extend Point’s lead 4-1.

In the top of the fifth, Point would add another run following a sacrifice fly from Marquand that scored Sonnier.

In the bottom of the sixth, the Rams’ offense began to come alive, as they scored their first run of the inning off an RBI single through the left side. With two outs, Bluefield’s Bryce Medlock connected for a 3-run home run to even the score at five.

Point would quickly answer, pushing two runs across in the top of the seventh. The Skyhawks’ first run came off an infield double play that allowed Sonnier to score, and Dillon Brown later scored following a wild pitch (7-5).

Bluefield, however, did not allow the Skyhawks to get comfortable, as the Rams tied the game once again with a 2-run home run in the bottom of the inning. Bluefield’s scoring did not stop there, as the Rams added five more runs in the frame, taking the lead 12-7, and Point was unable to answer.

Sonnier and Marquand led Point at the plate, going 3-for-5 with an RBI each. They were followed by Woods, who was 2-for-3 with an RBI, and Brown, who went 2-for-4 and finished the season with a 12-game hit streak. Bush, Garcia and Dower also recorded a hit, with Bush and Dower each recording an RBI.

Chase Raines got the start and went 5.2 innings, giving up seven hits, five runs (four earned), walking one and striking out two. In the sixth inning, Adam Castillo came in for relief and tossed one-third of an inning, giving up two hits and two runs (both earned).

Alex Williamson suffered the loss, going one-third of an inning, giving up one hit, two runs (both earned) and walking one. Casten Reed threw the final two-thirds of the seventh, giving up four hits and three runs (all earned). Bailey Mara pitched the last inning and only gave up one hit.