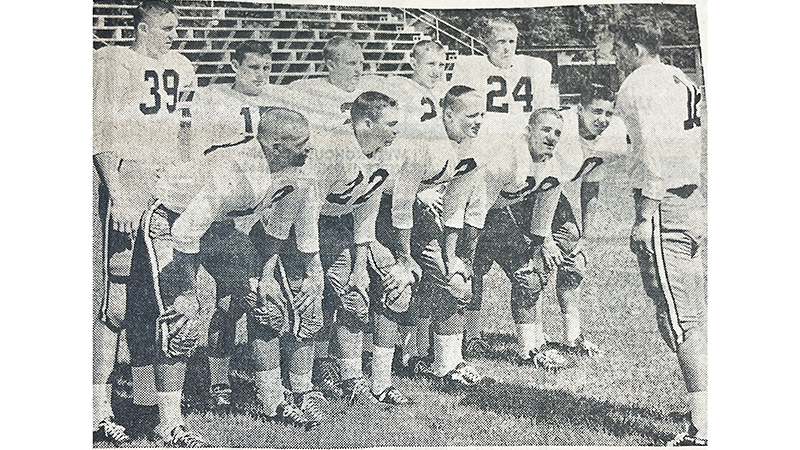 Game ready: Members of the 1959 Lanett Panthers prepare to take on the LaGrange Grangers in the first game played in newly constructed Callaway Stadium. Lanett lost the game 15-0 but will remain in the history books as the first opponent in the stadium. Archived photo.

It was September 11, 1959. Long before 9/11 was seared into everyone’s brain, the date held a different sort of significance in this community. The sporting landscape in Troup County changed forever. On that date 63 years ago, the LaGrange Grangers 1959 team was about to christen the iconic Callaway Stadium in the inaugural game against border rivals Lanett.

“LaGrange High Grangers were the first game there,” 1959 Granger End Larry Culbreth said. “It made me feel very proud and honored. It was truly a great honor.”

At the time of its opening, the stadium was one of the most modern high school football stadiums in the entire country. The stadium even had an 18-inch elevation in the center of the field to ensure drainage in wet weather, which was extremely cutting edge for the era. The entire stadium was built for $250,000 ($2.5 million after inflation in 2022) and was truly modern for the time.

What once was Bermuda grass is now AstroTurf. Wood seats became bleachers. Leather helmets were replaced by plastic helmets with face masks. Despite the ever-evolving stadium, one thing certainly remains from 1959: memories.

“When It was first opened, it was a fantastic venue, a beautiful stadium with a nice scoreboard,” Culbreth said. “We were really pleased to be able to play there.”

“It was a whole different atmosphere then,” 1959 Granger halfback Jimmy Matthews said. “We had great support from our fans and classmates. Everybody got rowdy and hollered and screamed.”

One of the reasons the game got so rowdy was the fact that around 5,700 people piled into the stadium despite the capacity being a little over 5,000 as the stadium only had 5,104 seats when it first opened.

The Grangers were the reigning AAA state champions coming into the game under the leadership of legendary coach Oliver Hunnicutt, who coached the Grangers from 1946 to 1971. Coach Hunnicutt was aided by assistant coach Al Marrioti, who is also a legendary sports figure in the Troup County community.

“Coach Hunnicutt and coach Marrioti were outstanding coaches,” said former player Harry Strack. “I didn’t realize how good they were until coach Hunnicutt called Danny (Daniel) about some tapes from the old gym, and we watched them and that team had more discipline than a lot of college teams did.”

“Coach Hunnicutt and coach Marrioti were strict disciplinarians and were hard coaches,” Culbreth said. “They pushed you, but they got the maximum out of every player, and I remember in the summers we had two practices a day, and it was hot as blazes.”

This was an era where only juniors and seniors were regularly included in the varsity action, and most of them had to play both offense and defense. Danny Daniel was the starting center and played linebacker on the 1959 team and only weighed 150 pounds, a size that would not cut it for a center in today’s modern football with behemoths lining up in the trenches.

“Back in those days, the varsity players had to play both ways and a lot of times by the end of the game you were so tired that you didn’t care who won,” Daniel said with a laugh.

Daniel would captain the team during his senior year in 1960, but this game in Callaway Stadium was his first-ever game on the varsity team. He was so nervous for his first action with the varsity game that he actually threw up before the game.

The Friday night games were everything in those days. The entire city of LaGrange would shut down to go and watch their Grangers if it was a home game, but the first home game at Callaway Stadium was even bigger. This was the first time these players had ever played in front of such a large crowd.

“The atmosphere was amazing,” Matthews said. “It felt like they packed the whole city into the stadium for that game.”

The Grangers team of 1958 that won the state championship helped build a foundation for the team that took the field in Callaway Stadium as well as the actual stadium itself.

“That 1958 team helped build that stadium,” former player Charles Knight said. “Some of them worked for Newman Construction and helped build the stadium. It’s been improved since, but they are the reason it’s still in such wonderful condition. The structure itself is solid.”

Before the opening of Callaway Stadium, the Granger team played on the baseball field and there was a giant lump in the middle of the field where the pitching mound would be during baseball season. Daniel remembers this not so fondly as he stumbled over it on more than one occasion.

The Callaway Stadium filled a huge need in the community as neither LaGrange or Troup High had a football field. Football was really starting to blow up around this era and the need for a place to host football went from a want to a need.

On the Lanett side of the first game in Callaway Stadium, the team came into the game as defending state champions as well and had eyes on spoiling the party for the Grangers.

“This was like walking into a paradise compared to what we were used to,” said Lanett starting left tackle Mike Hill. “It was truly a beautiful stadium.”

Hill was the only starter in the game on either team that was not a junior or a senior.

“LaGrange was always strong, and we had a hard time beating them over the years,” Hill said.

Hill was not surprised by the size of the crowd as the Lanett-LaGrange rivalry always drew out big crowds.

“It always was a packed house,” Hill said. “Ninety percent of the time until coach (Mal) Morgan retired we beat them, and Lanett always had a lot of people show up.”

At the time, Lanett had a long line of capable quarterbacks as they passed the ball and used cutting edge offensive tactics for the day. Two of the previous quarterbacks — Richard Wood and Bobby Hunt — played college ball at Auburn University. In 1959, the starting quarterback for the game was Coy Sorrell, who was one of the best quarterbacks in the state of Alabama, but could not get much going on the night as the Grangers shut out the Panthers in a 15-0 win for LaGrange. This was such a dominant defense for LaGrange that this was just the first of eight shutouts the defense pitched in only 10 games played.

It was Grangers’ halfback Ronny Kilgore who stole the show as he scored two touchdowns in the game to help propel LaGrange to victory. The first touchdown of the game saw Ted Alford hit Kilgore on a pass play that went for 57 yards. Kilgore punched in another touchdown from the one-yard line later in the game to give the Grangers a commanding 13-0 lead. LaGrange added a safety in the fourth quarter to ice the game and beat its rivals from across the border.

The Grangers team was loaded with talent including coach Hunnicutt’s son, Pat Hunnicutt, who went on to play football at the University of Georgia.

The rivalry between Lanett and LaGrange was a big deal back in the day. It is a rivalry that is sorely missed by the players who used to play in the rivalry game at the beginning of every season. Once Callaway Stadium was built, the games became even bigger for the LaGrange community as over 5,000 fans poured into the stadium in the first game of the season to see who would come out victorious in the rivalry game.

“We had a good team, and they had a good team too,” Daniel said. “Both teams were coming off state championships and wanted to win the first game of the season.”

“We were really excited because we always opened the season versus Lanett,” Culbreth said. “We were always super pleased and relieved to beat them.”

The number of players that played in the first game in Callaway Stadium are dwindling. Some have passed on and many of those that remain have memories that do not work like they used to, but the bond the players shared remains and the significance of their contributions to the cornerstone of football in Troup County lives on. Now, three high school teams and one college team play in the stadium that they once christened with their presence.

“Several of the players have passed on, but we had some real good times playing together,” Knight said. “We had a good team and an even better stadium.”