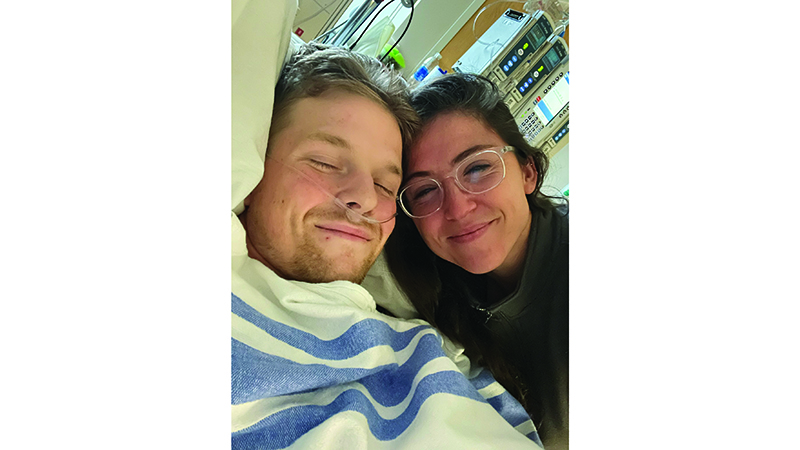 Get well soon: Bentley Bonner, left, lies in his hospital bed with his girlfriend, Tiffany Howard, by his side. Bonner was involved in a motorcycle accident on April 10. His numerous injuries include a broken hand, a broken pelvis, a broken scapula and a shattered right femur. Birdies for Bentley will raise money to pay for his medical bills and related needs.

Bentley Bonner, a Valley native and civil engineering student at Auburn University, is in need of financial assistance after surviving a crash on his motorcycle. Andrew Anthony, a friend of Bonner, is organizing a golf tournament called Birdies for Bentley to cover Bonner’s medical costs and potentially make Bonner’s home more handicap-friendly, as Bonner’s right leg had to be amputated after the crash.

Birdies for Bentley will take place on June 5 at Point University Golf Course in Lanett.

Anthony said plenty of volunteers have signed up to help with the event. What he really needs now are as many sponsors as he can get and many more golf teams of two. He estimated that 12 to 16 teams have signed up, but there can be as many as 70.

The entry cost for the fundraiser is $100 per person, which covers the entry fee, green fee, cart fee and range balls. Spectators can get in free unless they want to rent a cart.

The event will have an 8 a.m. flight and a 1 p.m. flight. At the start of each will be a “two-man scramble,” which Anthony explained.

“It’s a best-ball scramble,” he said. “So ultimately, say you and I are on a team. You hit a better shot than I do, and I’ll pick my ball up, and we both play from your spot.”

Lunch will be free. Anthony said it will probably be hamburgers and hot dogs, but this could change.

Mulligan packages will be available, which Anthony explained.

“Say me and you are on a team,” he said. “I hit a bad shot, and you hit a bad shot. We can ultimately take a mulligan, which is another word for a reshot to ultimately see if we get a better shot.”

Raffles will also be available. At the moment, there are two raffle prizes, but there could be more leading up to the tournament.

Two large cash prizes will be available from the event.

Anthony said that anyone who enters the tournament will be eligible for a $15,000 shot, which men can make from 165 yards and women and seniors (65 and up) can make from 150 yards.

A raffle drawing will allow one person to potentially win $1 million if they make a shot from a longer distance.

On April 10, Bonner had been studying late at night at his school library for an upcoming exam when he got on his motorcycle and attempted to drive home. A driver swerved into his lane and hit him head-on. He was airlifted to the University of Alabama at Birmingham, where he received emergency surgery to amputate his right leg. His numerous injuries include a broken hand, a broken pelvis, a broken scapula and a shattered right femur.

Anthony said that as far as he knows, Bonner is doing well.

Anthony and Bonner have known each other since childhood. Anthony said they attended the same elementary school and daycare and saw each other many times throughout the years.

He said that because he runs monthly golf tournaments, he felt a call from God to create this fundraiser.

“After some discussions with my wife, that’s what we decided to do,” he said.