LaFayette graduates Class of 2022 amid threat of rain 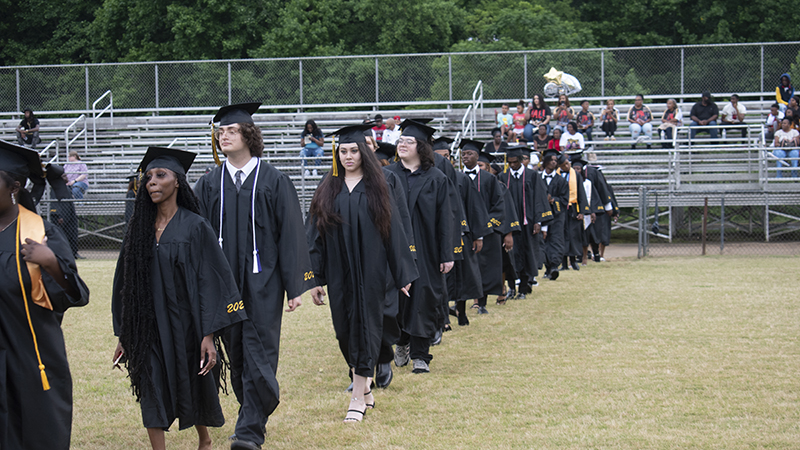 Due to rainy weather, LaFayette High School’s graduation ceremony was almost held in the school gym. Fortunately for those who prefer the outdoors, the weather cleared, and the ceremony was held at Bulldog Stadium. The stands were alive with smiling faces and school colors.

“I would like to thank you for all of the love, support and hard work that you have given each and every one of us throughout the years,” she said. “And for that, we thank you, and you are welcome.”

“On behalf of Chambers County School District, we celebrate each of you for a job well done,” she said. “I was so appreciative when your principal, Mr. Davis, asked me back during the fall to speak during your graduation. It’s such a pleasure to stand before you tonight, especially those of you who attended Eastside Elementary School. It was you all that were sitting in the fifth grade back in 2014 when I was appointed as your new principal there. You were the first to help me start my journey here in Chambers County.”

Burnett read a poem, “The Race,” by Dr. D.H. “Dee” Groberg. It was about a boy running in a race who kept falling down and being encouraged to get back up by his father. The boy lost officially, but he didn’t lose in his father’s eyes, who saw him as a winner for his persistence.

“In closing, tonight is your night,” Burnett said. “Your race into adulthood is about to begin. No matter what may come your way, always run on until the end. Make good decisions, live life to the fullest and do your very best through it all.”

“It’s amazing that this journey started down the road at Eastside Elementary over a decade ago,” he said. “Although our Eastside days were over, our journey continued to John P. Powell Middle School. At J.P.P., it was different. It was the beginning of a new era. It was time to start finding ourselves and becoming more mature.”

He recalled the effects of COVID-19 on his class.

“After years of learning in person, we had to shift to virtual classes, something completely new to not only the students, but the staff as well,” he said. “When COVID came, it felt as if everything was going downhill from there.”

Thomas said he believed his class had treasured their last year together.

“Everyone wants to know the same thing — What do we do now?” he said. “The answer is simple — continue to do what you’re doing. Continue to keep going. You made it to graduation. Every assignment, test, project and exam you have overcome for this very moment. You persevered. You continue to want better for yourself.”

Thomas said there was one thing he’d like his classmates to do differently — to push themselves to new limits and get out of their comfort zones.

Davis delivered the closing speech. He said that when he was trying to decide what to tell the graduating class, he picked two quotes. One was by a famous football coach, and the other was by Yoda, the fictional character from Star Wars. He said the quotes summed up how to be successful in life.

“The year was 1981, and the Auburn Tigers had been in an eight-year slump,” he said. “They didn’t do much there in the 1970s and certainly never got close to beating Bama after 1972. They never won big ball games. They weren’t expected to win. But Coach Pat Dye was hired in 1981, and with him, be brought a new brand of football.”

Davis said that during a game against a Tennessee, Dye saw his team go to their locker room with their heads held low.

“He grabbed them up,” Davis said. “He said, ‘Man, there are going to be a lot of days that you lay your guts on the line and you come up empty-handed. There’s nothing you can do about it but go out there and do it again and again and again.”

Davis looked and sounded like he was about to cry when he brought up the Yoda quote, “Do. Or do not. There is no try.”

“What he was telling [Luke Skywalker] is something I want you to hear and take to heart, that you never try at anything,” Davis said. “Nobody in this stadium in the stands or on the field has ever tried a single thing in life. You either do or you don’t do it.”

Davis told the graduating seniors that he loved them and told them to turn their tassels. He told the audience that the seniors had earned $3,653,599 worth of scholarship money.

The seniors sang the LaFayette High School alma mater before leaving their seats.