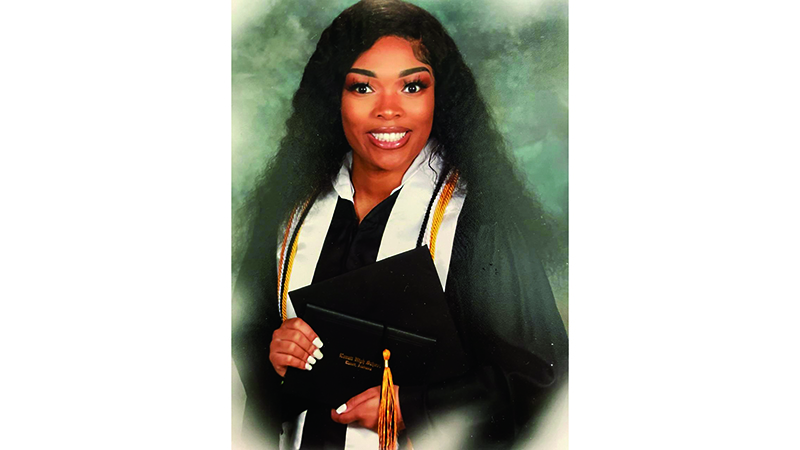 Lanett salutatorian: Madison Davis has been selected as Lanett High School’s salutatorian for the Class of 2022. Photo contributed.

Madison Davis said it felt like a “dream come true” to be chosen as the salutatorian at Lanett High School and considers it her greatest accomplishment there. During her speech, which she will give on May 20, she plans to reflect on the past and future.

“I plan on telling how the past [has] shaped us into who we are today and how our class [has] gotten close over the past years,” she said. “With the future, I plan on telling them to stay true to themselves and get everything they want out of life.”

A major turning point in Davis’s life was during her junior year when her math teacher, Jacquis Cofield, pulled her aside and told her she needed to watch how she acted because she had a bright future ahead of her.

“She was also the one who taught me that respect will carry you a long way,” Davis said.

Cofield talked to Davis often and even helped her with her graduation speech. Cofield inspired Davis to stay positive and not let other people’s attitudes influence hers.

Davis said she plans to become an accountant. She likes bookkeeping and the idea that she could make a lot of money doing it. She plans to attend Alabama A&M University. She is currently dual-enrolled with Southern Union State Community College.

She said she’s been a high-achieving student ever since elementary school. She attributed this largely to her dad, Nicholas Davis.

“He always pushed me to do my work, and he’d [give me praise] for having good grades and stuff, so I’d try to make him proud,” she said.

If she could give advice to current or future students, she’d tell them to be true to themselves.

“Just because you’re the only one doing something a different way doesn’t mean it’s wrong,” she said. “It just means it’s different, and it’s OK to be different.”

If she could change one thing about the world, Davis would have people have more positive attitudes.

An accomplishment Davis is proud of is buying her own car. She said she purchased it in early November 2020 and paid it off in late November 2021.

Davis said she was born and raised in Lanett.