Lanett High School valedictorian says to be true to yourself 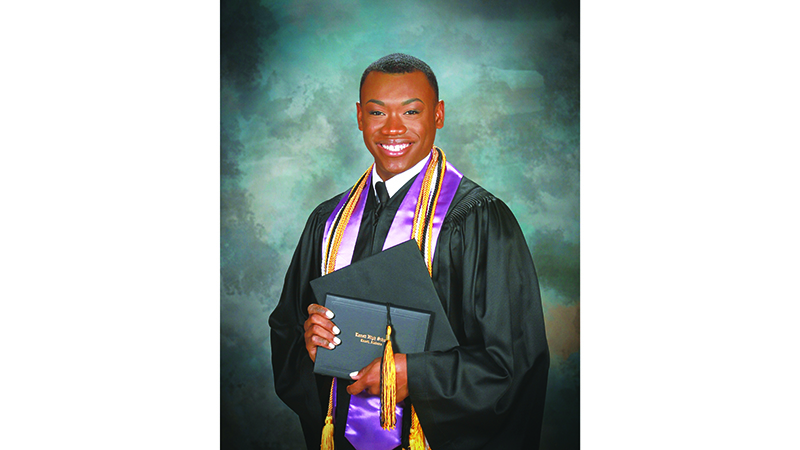 Bobby Moore, Jr., the 2022 valedictorian of Lanett High School, is living proof that authenticity is conducive to success. A turning point in his life was when his ninth-grade history teacher, Tiesha Williams, told him to be unapologetically himself.

“That really helped me flourish in high school and also just in life in general,” Moore said. “It allowed me to really break out of my shell and to stay true to myself and also to work hard to achieve goals in school, in academics, and in the workplace. Just overall.”

If he could give current or future Lanett High School students advice, it would be to be the best versions of themselves. If he could change the world, Moore said he’d have people be more accepting of each other’s differences.

Moore said he feels honored to have been chosen as his school’s valedictorian and that it feels like his hard work has paid off. Perhaps surprisingly, Moore describes himself as a procrastinator. When interviewed, he had no idea what he’d say during his speech. He said he works well under pressure.

Being able to achieve his goals in school has been Moore’s most positive experience at Lanett High School.

“At Lanett High School, I found a love and a passion for mastering things,” he said. “And I think in education… once you master a task, it really feels good.”

An example of a task Moore has mastered is time management. He balanced working with being dual enrolled at Lanett High School and Southern Union State Community College.

Moore said he plans to stay at Cracker Barrel. He wants to become an associate manager with the company.

He said he graduated in December and still attends Southern Union. He said he is currently studying basic classes. In the fall, he plans to be enrolled full-time and eventually get an associate’s degree in business management.

Moore has always been a high-achieving student. The greatest obstacle he’s overcome is having to switch to virtual schooling during the pandemic.

“We had to learn how to work the learning management system called Schoology,” he said. “Then, we were a hybrid school. We went to school two days a week and went virtual the other three days. Then, we became traditional, in school every day … so we have had to go through all these changes and learn all these new learning formats, and we learned a great skill called adaptability to be able to still flourish while having all these changes go on with our education.”

He has stayed motivated by wanting to be the best version of himself and being encouraged by his family to succeed. He said his mother, Theresa Moore, has been especially motivating.

Moore was involved in several extracurricular activities. He participated in Future Business Leaders of America during all four years of high school and was its president for one year. He was also in the marching band for two years.

“I was involved in Student Government,” he said. “I was the class president for three years. I was in the Math Club.”

His resume says he also participated in his school’s varsity track and field group, Key Club, yearbook staff and JROTC drill team and color guard. His GPA is 4.0. He was a member of the National Honor Society, National Society of High School Scholars and National Beta Club, is CPR certified and was declared a Cracker Barrel Brand Promise Champion.

Besides being chosen as valedictorian, Moore is also very proud to have been Mr. Lanett High School. ​​Being Mr. or Ms. LHS is the highest honor a senior at LHS can earn. Each candidate has to meet several requirements, including having a B average or higher on their transcript, participating in at least one school activity every year and having no recorded disciplinary infractions. Candidates have to each create a portfolio, submit an essay and complete an interview conducted by a panel of teachers.

More was born in Montgomery and raised in Lanett.