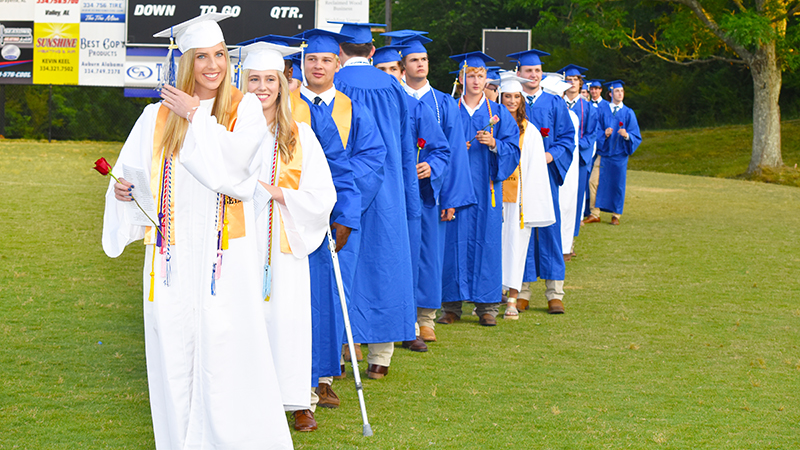 Senior walk: Above, the 2022 Chambers Academy senior class walks on Torbert-Allen Field on their way to the stage to finish their high school careers during Thursday’s commencement ceremony. Photo by Wayne Clark.

LaFAYETTE — Chambers Academy hosted its annual commencement at 7 p.m. CDT Thursday on Torbert-Allen Field. A total of 40 seniors received diplomas. It was the largest graduating class in school history.

In speaking to a large crowd gathered for the ceremony, Headmaster Jon Owens said Chambers Academy had experienced massive growth since this year’s seniors were kindergarteners. There were 13 children in that class. The numbers grew slowly when that core group was in elementary school but started to pick up when they were in junior high. There were 23 students in the seventh grade and ballooned up to 40 this year.

There were 272 students enrolled at Chambers Academy this year. That’s up from 240 last school year and 218 two years ago.

“This school had a low enrollment when these students started kindergarten, but the class grew and grew to where it was this year,” Owens said. “We had 40 seniors and 272 in the building this year because of the sacrifices made and the work done by the parents. From the bottom of my heart, I thank you for that. This is a great night for our seniors and their families. A chapter is closing for you, but there’s a whole book to write. No matter where you go in life, Chambers Academy will always be home for you. It’s where you grew up. It’s a great place. It will mean something when you go out into the world as a Chambers Academy Rebel.”

Twenty-five of the graduating seniors will be continuing their educations in college, and 15 will be going straight into the workforce. This year’s senior class received more than $1.3 million in scholarship offers.

This year’s class valedictorian, Mattie Reese, kept a family tradition going. Her two older sisters had been valedictorians at Chambers. Mattie said that her sisters had delivered excellent speeches on their graduation nights, leaving her a tough standard to live up to.

“They were both funny and moving,” she said.

She got the funny part right by recalling some of her classmates singing “Big Green Tractor” as loud as they could in kindergarten one day and thanking some local police officers for helping them roll Coach Jason Allen’s yard on homecoming night.

Mattie said that she and her classmates could take pride in setting the bar high for future Chambers classes.

“Members of this class played in nine state championship games,” she said. “Our class has been through good and bad. We experienced the heartbreak of losing a much-loved classmate, Holden Messer, in an accident in July 2021. We have experienced the good times of winning state championships in football. We have learned to have fun in the good times and to be strong in the bad times.”

“We will be going separate ways after graduation,” she continued, “but we will never forget going to school here. I can’t wait to see what God has in store for the Class of 2022.”

Class Salutatorian Claire Allen said that graduation nights are always a time for reflection and anticipation.

“This school will always hold a special place in our hearts,” she said. “We have experienced memories that will last a lifetime. We look forward to the next phase of our lives with anticipation. We look forward with excitement to what lies ahead for us.”

“The true meaning of success is to follow a path that God has laid out for you,” she said. “I want to follow that path and to have as few regrets as possible when I am old.”

A number of awards presented on graduation night are named for CA alumni and supporters. The Mark Stevens Award for the best sportsmanship on the part of a senior basketball player went to Jarquez Banks, the Carla Blackmon Cheerleading Award went to Natalie Lovelace, the Bo Clark Senior Athlete Award to Claire Allen, the Jeremy Smith Goodwill Ambassador Award to Joseph Hendrix, the Dr. Richard Lowe Citizenship Award to John Robert Ramirez, and the Billie Ann Tucker Drama Awards to twins Jenna and Lauren Fuller.

Each student received their diploma on a stage set up near the middle of the football field. They marched in to “Pomp and Circumstance” from the south end of the stadium and were seated on the north end of the field. Bailey Allen said an opening prayer, John Ramirez led everyone in the Pledge of Allegiance, Natalie Lovelace gave the welcoming address and Lauren Fuller sang a song appropriate for graduation night – Miley Cyrus’ “The Climb.”

Alexis Smith poked some fun at her classmates with a humorous poem about them.

Emily Milford announced the awards and the scholarships. She also did the roll call of seniors. Jon Owens and Kyle Jackson presented the diplomas.