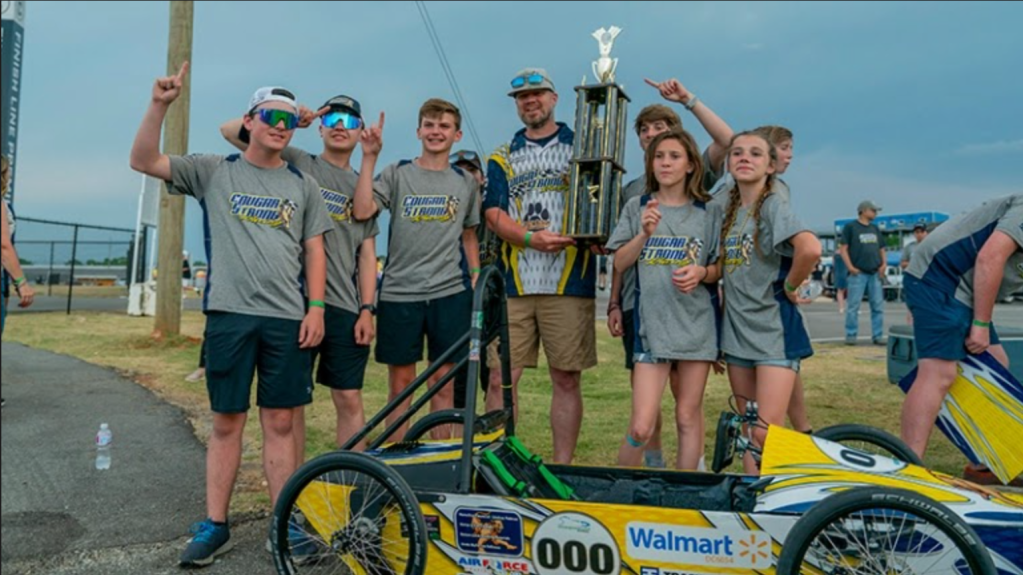 What a performance: Inspire Academy finished third in the championship custom division of Saturday’s GreenPower event at Talladega Superspeedway. Photo by Scott and Kayleigh Harrison of Point by Photography.

It was an action-packed weekend at Talladega Superspeedway as Green Power race teams poured in from all over the country to take part in the GreenPowerUSA National Finals. Locally, the three Long Cane Middle School teams, the Callaway High School team and the Troup County High team all took part in the event this past Saturday.

These teams are not just there to fill up the numbers as all three schools made an impact at Talladega. The Cougar Strong race teams from Long Cane are some of the best in the country and proved it once again. The seventh-grade team won the national championship in the middle school modified division, narrowly edging out the Cougar Strong eighth-grade team in the final standings. The margin of victory was just .648 points as the seventh grade team earned a final score of 95.848 while the eighth-grade team earned a score of 95.2. Third-place Challenger Middle School finished with a final score of 93.6. The scores are a combination of a presentation score and the racing score. This events presentation had the teams put together a video during the weeks leading up to the race.

“When they called out our name for first place, it was probably the best feeling in the world,” said Drew Pearson, a driver on the seventh-grade team.

There was a friendly competition between the eighth and seventh-grade teams during the season as they were neck-in-neck in points most of the year. The regular season points were used to decide where the teams started on the grid at Talladega.

The architect behind the Cougar Strong program is Matthew Graham, who has helped spread the Green Power racing program into other schools in the area.

One of these schools is Troup High, who are currently in their first season. Despite this, the Flying Tigers came home with a runner-up finish in the championship stock division for the high school level.

“I’m probably most proud of them,” Graham said. “They’ve worked so hard and when I was talking with Danny Besley (the coach of the Troup’s program) I tried to tell them that they had a chance.”

The Troup program has come a long way over the last year. Many of the students on the team were once a part of Graham’s Cougar Strong race teams when they were in middle school.

Callaway also sent a car to Talladega as this is their first year competing as well. The Cavaliers finished in fifth place in the championship custom division at the high school level at Talladega.

“The fact that we had an operating car that lasted the full 90 minutes for both heats made me pleased with that,” said Kyle Veatch, the leader of the Callaway Green Power team. “We also had dedicated students who were willing to do what it takes to get the car ready and participate.”

Callaway’s program is still in its infancy, but Veatch hopes to build the program to new heights going forward.

The Inspire Academy from LaFayette, Alabama finished third in the championship custom division. The Inspire program hosted a race in the fall of 2021 as their Green Power program continues to grow.