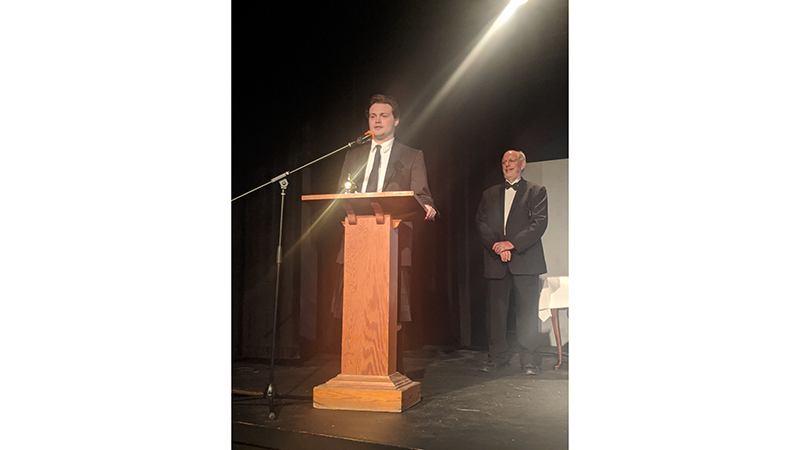 And the winner is: James Dorminy, who played Paul in “Barefoot in the Park,” accepts his David award for outstanding actor, male, in a principal role, with managing artistic director Bill Nixon looking on. Photo by Cole Trahan.

On Tuesday, the 19th annual awards ceremony at New Horizon Community Theatre in West Point began with laughter. After board chairman Eddie Lanier thanked everyone who had contributed to the theater in some way and recognized board members, managing artistic director Bill Nixon took his place at the podium. Two actors pretending to be security guards stood on either side of Nixon.

“With the recent attacks on Chris Rock and Dave Chappell, the board of directors insisted that I hire additional security tonight,” Lanier joked. “We do have a budget.”

After the actors left the stage, Nixon, like Lanier, thanked the board of directors for putting the event together.

“Every year, they put a lot of work into making this the best award ceremony possible,” he said. “Probably the best one in this building this year. But none of this would be possible without the hundreds of people who work diligently all year, many of whom are in the audience tonight.”

“I’m sure you’ve seen these little gold statuettes scattered around the theater,” he said. “These are samples of our awards. Each recipient of one of these awards gets one of these trophies, which we affectionately refer to as Davids after David O’Keefe, the founder of the company and our first artistic director.”

He went over shows the theater had put on during the current season. They were “Joseph and the Amazing Technicolor Dreamcoat,” “A Barrel Full of Pennies,” “Once Upon a December,” “Barefoot in the Park” and “The Hobbit.”

On June 2-4, the theater will show “One Stoplight Town.”

“The show takes place in a small town similar to Lindale, Georgia, where I grew up,” Nixon said. “The town’s so small, you might drive right through it without stopping, without looking, except for that one dreaded stoplight.”

Audience members were treated to a slideshow of pictures from the season’s past performances.

“Also, 100 percent of the money we receive for dues goes into the scholarship fund, so if you want to become an official member of the group this year, dues are $5 per person per year,” Nixon said.

Nixon explained how young actors were selected for awards. There is a selection committee composed of people who have attended all of the theater’s productions during a season. They go through the characters in each play and develop a shortlist of character names that are placed on ballots by category. The actors’ names are added, and at the end of the season, the ballots are sent out by U.S. mail to all season ticket holders. Nixon said that this year, there were a total of 158 ballots mailed.

“The season ticket holders return their marked-up ballots to the theater where another committee counts the ballots,” he said. “The ballots are counted and confirmed in such a way that no one individual knows the winners in any category.”

The candidates for the David award category for outstanding actor, female, in a principal role were Erin Bryson, who played Elven Queen in “The Hobbit;” Tricia Dimon, who played Mina in “A Barrel Full of Pennies” and Sophie McDow, who played Corie in “Barefoot in the Park.” The David award for this category went to McDow.

Nixon explained that the director’s award is meant to honor someone who has made exceptional contributions to the theater over the past year and is selected by Nixon.

“Tonight’s recipient doesn’t let anything get in the way of helping,” he said. “An actor, singer, dancer, set designer and builder, organizer, helps with the props, helps clean the theater, puts stuff away — sometimes in the right place — supports us financially, supports us physically. Listens to my vents and rants when things are hectic and generally keeps me sane and focused. I try to return the favor.”

The winner of director’s award was theater director Julia Langley. Langley wasn’t present, but Nixon said she’d be back for the 13th annual performing arts camp.

Nixon went over the performances planned for the 2022-2023 season. They are “Love Letters,” “Seussical,” “Jane Eyre,” “A Christmas Carol,” “Once Upon a December,” “Always, Patsy Cline” and “Annie.”