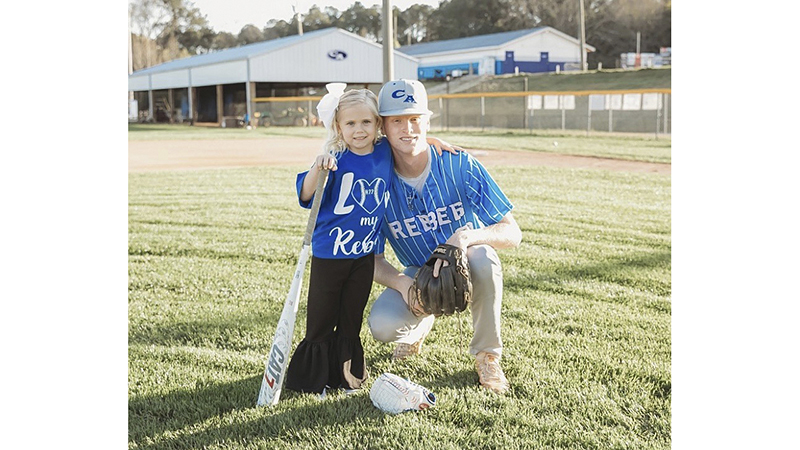 At Chambers Academy, a senior has formed a special bond with a kindergartener. It all started at the beginning of the school year when Joseph “Jojo” Hendrix volunteered as a PE aide.

Harper McWhorter, a kindergartner at Chambers, had gotten sand in her eye and ran up to Hendrix crying. Hendrix helped her get the sand out of her hair and calmed her down. The next day, while playing kickball, McWhorter followed Hendrix around and mimicked everything he did. From that point on, they became just like brother and sister, and Hendrix became Harper’s Jojo.

“Since day one, Harper gravitated toward him and he has embraced her,” said Megan Simpson, McWhorter’s mother.

Hendrix played baseball, which sparked McWhorter’s interest to play T-ball this year. McWhorter attended Hendrix’s baseball games, and he would got to her T-ball games.

“You don’t find many teenage boys who would act that way to a 5-year-old they had never met before. It is definitely a unique relationship unlike any other,” Simpson said.

Both families have become close to one another and have a great relationship. Most mornings before school, McWhorter’s grandmother drives by Hendrix’s truck so they could talk before the day starts. When asked about his favorite quality in Harper is, Hendrix replied, “Her beautiful smile, her eyes, the way she says my name, and runs up to me before PE to play before the other kids.”

McWhorter was protective of her Jojo from the start. When other classmates would try to play with Hendrix, she would grab his arm and say, “My brother.”

And when it came to meeting Hendrix’s girlfriend, McWhorter grew even more defensive. When shown a picture of his girlfriend for the first time, she squinted her eyes and make a face. McWhorter refused to take a photo with Phillips and held tightly onto Hendrix. It was not until after meeting Phillips a few more times at Hendrix’s baseball games that McWhorter warmed up to her and grew to love her as much as Hendrix.

Hendrix’s brother, whom McWhorter adores as well, will be at Chambers Academy next year, and Hendrix hopes he will volunteer to be a PE aide like he did so that Harper will have someone special watching out after her. Though Hendrix is graduating, he hopes to keep in touch and support McWhorter in all her future endeavors.