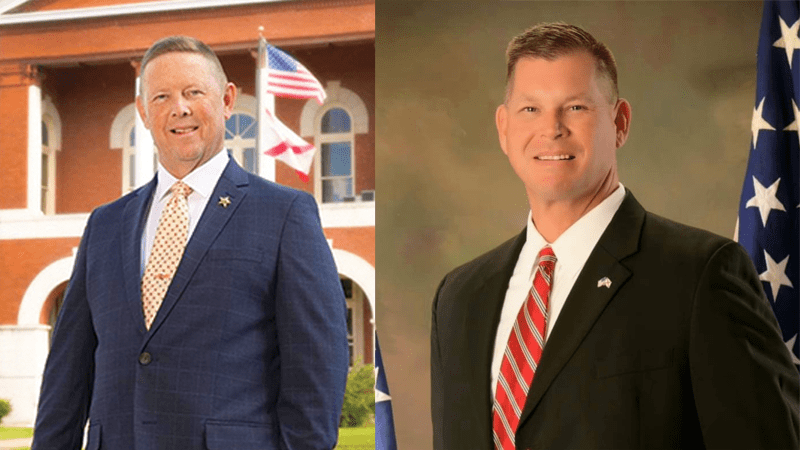 Republican candidates for sheriff: Candidates Richard Carter (left) and Jeff Nelson (right) talked about their campaigns for sheriff ahead of the May 24 primary. Photos contributed.

The winner will match up against Democrat Jeff Blackstone in November’s general election. Blackstone is running unopposed in the primary.

The Valley Times-News interviewed both Republican candidates on their work histories and focuses of their campaigns.

Chief Deputy Richard Carter of the Chambers County Sheriff’s Office has worked in law enforcement for 32 years, starting out on Jan. 2, 1990, at the Valley Police Department, where he worked for about a year and seven months. He then spent 17 years with the Lanett Police Department.

“I moved up through the ranks from a patrol lieutenant to running the investigative division,” he said. “And then I got moved up to the assistant chief. And for a little while, I was the interim chief. And then, when they hired a permanent chief of police, I went back to my assistant chief position. Then, in 2007, is when I came to the sheriff’s office.”

When he first got hired by the sheriff’s office, Carter started out as a lake patrol officer at West Point Lake and then was moved to investigations. He has been in his current position for 13 years.

“Less than 2% of American law enforcement have the option or have the opportunity to go to that school,” he said. “You’ve got to be recommended by somebody. And I was the first officer with Lanett PD to get that opportunity. In Chambers County, there have only been four officers who have been able to go to that class.”

Carter also said he earned a bachelor’s degree in his mid-40s in criminal justice administration.

He said he wants to be sheriff as a way of giving back to the county he grew up in. He said it would be an honor.

“This has always been home to me,” he said. “I’ve always served here, and it’s been good to me and my family. I’ve always had a passion of serving the people I grew up with.”

Nelson retired from being an Alabama State Trooper on March 1.

He first started as a state trooper in Chambers County in 1997. In 2012, he went to work for the Alabama Bureau of Investigation, where he stayed for seven years. Later, he was assigned to the Drug Enforcement Administration with the Department of Justice out of Montgomery.

“And I covered the middle district of Alabama with that,” he said. “And then, I came back to the highway when my father was diagnosed with cancer, so I could be closer to home in Chambers County as a trooper again. After he passed away, I was requested to go to protective services and was a bodyguard for Governor [Robert] Bentley.”

Nelson continued to be a bodyguard for the governor, eventually serving Gov. Kay Ivey, when his mother got sick.

“And I left the governor’s detail again, I came back to the highway patrol,” he said. “She died in June of 2020. And then I stayed here in Chambers County because that was about the time when Sheriff Lockhart announced his retirement, so I could run for sheriff.”

“Sheriff Morgan actually asked me if I’d ever thought about becoming a sheriff in Chambers County,” Nelson said. “And he and I and Sheriff Lockhart had talked about it over the years and everything, and I had several people come to me throughout Chambers County asking me if I would do it. So, when I look back at everything I’ve done in my career, my training, the investigations I’ve done, not only just in this county but in all the other counties, I feel like I bring a lot more to this department here in Chambers County.”

WHAT WILL YOU CHANGE?

Both candidates plan to do things a little differently.

“There’ll be small changes. There’ll be some bigger changes,” Carter said. “We’re going to do some things from an administrative standpoint. I plan on adding more deputies. Of course, all of this has got to be worked out. I’ve been working with the commission for the last 13 years. I’ve got a good working relationship with them.”

Because the county is growing, Carter said more deputies are needed.

“I want to add a few more people to other divisions like the civil service division — we want to increase our service capabilities there,” he said.

Carter plans to bring back old programs to mentor youth and help them make the right choices in life. He would like to encourage young people to stay in Chambers County and be good citizens and leaders.

“We just want to let the kids know that what they see on the streets is not how life has to be,” he said. “There’s more out there.”

Carter said he wants more warrants to be served and that there are thousands of unserved warrants countywide. With every warrant is a victim who needs justice, he said, and they can’t help it until whoever harmed them is arrested.

“We’re going to work hard to get those warrants served, get those people processed through the legal system,” he said.

Nelson thinks the citizens of Chambers County are ready for change, although he also thinks Lockhart has done an excellent job. He said he doesn’t plan to “reinvent the wheel.”

“I guess you could say I think the wheel needs a realignment to get back to the basics of taking care of the citizens of Chambers County and policing the county,” he said.

Nelson said the sheriff’s department needs to get more deputies out patrolling the county. He said he wants them to be better trained and educated, so they can handle any situation they come upon.

“I want these guys to have as much knowledge in law enforcement as they can, similar to the way the state troopers do,” he said. “The troopers, they want you to be as knowledgeable as you can about every aspect of the law. They’ll send you to schools all the time, all over to get you as much education and knowledge as you can.”

Nelson also wants deputies to be better equipped. He said he wants deputies to have newer vehicles, arguing that the ones most deputies currently drive have almost 200,000 miles on them each. Additionally, he would like to pay deputies better to encourage them to stay with the department.

While the sheriff doesn’t run the Chambers County Jail directly, each candidate has his own vision for the jail.

Carter said the jail has to advance as new technologies, methods and procedures are introduced to it. He said he would talk regularly with jail administrators. For the most part, he is pleased with how it’s being run.

“The way they’re operating the jail now is top-notch,” he said. “Everybody’s highly trained. We’ve got some certified employees there. We’re going to work on getting everybody else trained and qualified. We want to get them more money. That’s where we struggle. That is, to pay for the jailers. Correction officers.”

Nelson is concerned about mentally ill people in the jail. He described them as being patients more than they’re inmates. He argued that although the jail offers inmates some mental healthcare, they lose it when they leave. Additionally, he argued that being in jail can make them worse off.

Each candidate said his political party wouldn’t factor into how he’d do his job and wished he didn’t have to claim a party.

“My office is going to treat everybody the same,” Carter said. “I don’t care what color your skin is. I don’t care about your last name. I don’t care how much money you’ve got in the bank. Everybody’s going to be treated the same. We’re going to serve everybody in this county no matter what.”

Each candidate loves Chambers County for his own reasons and considers it home.

Carter and Nelson want voters to make well-informed choices when they vote.

Carter argued that he’d have a smaller learning curve than other candidates because he’s already very familiar with the Chambers County Sheriff’s Office.

He said that the work he does is about citizens, not about himself.