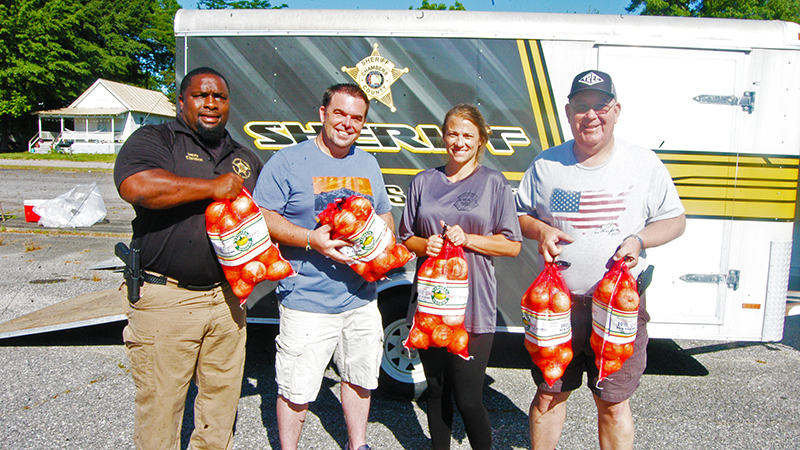 onion delivery: Sheriff Sid Lockhart and some members of the Chambers County Sheriff’s Office staff had a busy day on Tuesday. They distributed over 830 bags of Vidalia onions in Chambers, Troup and Randolph counties. Shown above, from left, are Deputy Loon Davidson, Major T.J. Wood, administrative assistant Macy Whorton and Sheriff Lockhart. Photo by Wayne Clark.

Lockhart has had some memorable trips to Vidalia, Georgia over the years, but things went really smooth this year. In past years, there have been flat tires that needed to be changed and vehicle trouble on the way over or on the way back.

“Everything went well this year,” he said on Tuesday. “Major T.J. Wood went with me. We went over on Sunday, spent the night and drove back on Monday. We brought back more than 830 10-pound bags. Most of them are the jumbo-size onions, but we also brought back some of the smaller Vidalia onions and some red onions.”

The onions were distributed locally on Tuesday. Lockhart, Major Wood, Deputy Loon Davidson and administrative assistant Macy Whorton were set up outside the courthouse annex in Lanett early in the morning. People from the Valley who had pre-ordered could pick up their onions from 7 a.m. until around 10:30. Mitchell’s Marine in LaGrange was the pickup location from 11 until 1 p.m. Lockhart and his onion team went to Randolph County after that to make some deliveries to John Boy’s Restaurant in Roanoke and to a district court judge.

All proceeds from the onion sale will help fill needs list for the Tallapoosa County Girls Ranch.

Lockhart said he has had a good run as Chambers County sheriff and appreciates county voters for giving him that chance to serve. He said he’d always remember the onion trips, cooking for a whole host of worthy causes and helping organizations like the Girls Ranch, a place he’s supported since 1973.

“I’m thankful some of Heston Yates’ family members helped us this year,” he said. “Heston went over with me the first year I went to Vidalia. I still have a picture of him standing in an onion field. Heston was good company to be around.”

Lockhart won’t be the sheriff this time next year, but it’s likely he will be called on to help out if he can. That could mean some more trips to Vidalia and back and a whole lot of cooking.