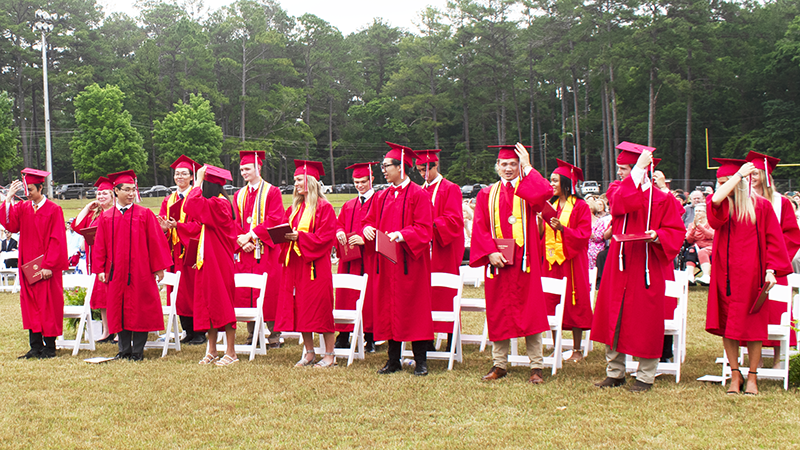 Springwood class of 2022: Springwood High School seniors turn their tassels signifying the end of a chapter of life during the 2022 commencement ceremony. Photo by Cole Trahan.

The athletic field at Springwood School was full of smiling faces Saturday as students and their loved ones attended the school’s graduation ceremony.

Sykes Smith, president of the board of trustees of the Chattahoochee Valley Educational Foundation, led the opening prayer, after which Head of School Lowrie McCown gave a welcoming speech.

“While commencement is focused on academic tradition, we are really celebrating who they are as a person far beyond the classroom,” he said. “At Springwood School, we are focused on developing students’ mind, body and spirit. Today is certainly a rite of passage from the confines of family and local community to catapult each student to new adventures in higher education, military service or into their career explorations.”

McCown’s speech focused on the concept of graduates entering a liminal space.

“Liminal space is in-between moments,” he said. “It’s when you’re just getting ready to leave one part of your life and move into another part of your life. It’s kind of like walking through a doorway. You know, there’s a threshold that you walk over when you go from one life to a new life.”

McCown said a liminal space takes place in the middle of every great story.

“Every story must have a protagonist who changes, and change happens through liminal space,” he said. “This liminal space is a time of transformation. As I’ve said, it means a threshold. This is really a benchmark liminal space when you graduate from high school.”

He said liminal space is uncomfortable because it’s unknown. But at the same time, it’s exciting because of that same uncertainty.

“How you address the liminal space is up to you,” McCown said. “You have a choice. You have the opportunity to have an attitude of looking at liminal space as a challenge and opportunity or you can approach it with fear of the unknown.”

McCown introduced Dr. Kim Baylis, director of academics, who he said would be taking over as the new head of school. He said that because of this transition, he was also in a liminal space and that he didn’t know what his next calling would be.

“But I do know one thing,” he said. “As I leave Springwood, I have fulfilled my purpose in a very interesting way. What I’ve learned in understanding what my purpose is to help position organizations for [their] future. But what’s fascinating is I never get to see the fulfilled future. My role is to help position things and then pass the baton to another leader to move the organization where it needs to go in its future.”

McCown congratulated Bayliss and introduced salutatorian Kaitlynne Easlick before allowing her to give her speech.

“Every one of you here today has made an impact on the graduates seated before you, and it is important to take the time and recognize all of those that have made today possible,” Easlick said. “Teachers and faculty, we would not be sitting here today if it were not for the diligent work you put into preparing us for the next step of our lives. Family and friends, your support and love in this trying and stressful time has made these last few months feel attainable. Finally, parents, we are especially thankful for your constant guidance and comfort through all the joy and hardship of senior year.”

“Many of the graduates seated before you have known each other for all of their lives and have taken almost every class together for as long as they can remember, which creates a bond that cannot easily be broken and makes saying goodbye so much harder,” she said.

McCown introduced valedictorian Jesilyn Mabrey before letting her give her speech.

“Confucius once said, ‘The journey of 1,000 miles begins with one step,’” Mabrey said. “And here we stand, about to step forward into a new voyage … As I look over my fellow [classmates], I see the trials and successes we’ve gone through together that have molded us into something better than when we first met.”

Mabrey reminisced about experiences she had had with her classmates.

“Not we stand on the edge of a new road — a road which could take many paths,” she said. “And as Robert Frost so eloquently phrased it, we should take the one less traveled by, and that will make all the difference.”

Mabrey named Bible verse Matthew Chapter 10 Verse 31 — “Don’t be afraid; you are worth more than sparrows.”

“This directly parallels Matthew Chapter Six when he tells us not to worry about our life, body, clothes, food or drink because he will provide,” she said.

As he says in verse 26, ‘Look at the birds of the air. They do not sow or reap or [gather] in barns. And yet, your Heavenly father feeds them. Are you not much more valuable than they?’” God sees the worth and worthiness in each and every single one of you as I’m sure your friends, family and mentors do.”

Taylen Ly, an honor graduate and vice president of the Class of 2022, sang the Springwood High School alma mater song.

Lanett High School seniors graduate in front of a…