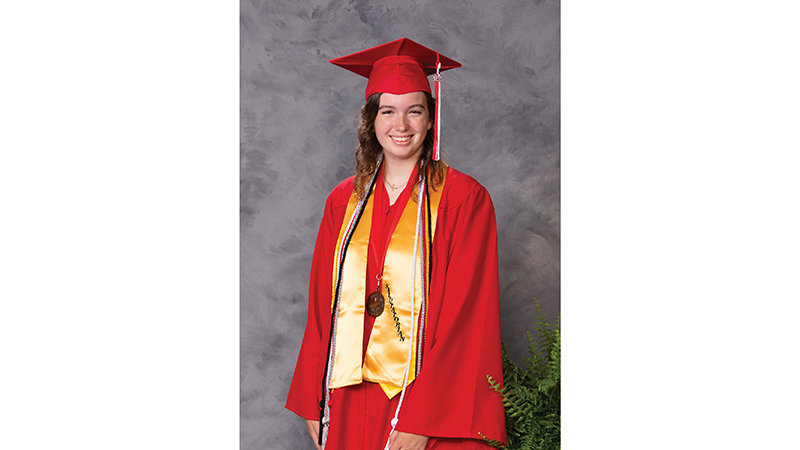 Kaitlynne Easlick said it was a “really big honor” to be chosen as the 2022 salutatorian at Springwood School.

“It’s definitely been a goal in my mind for as long as I can remember to be one of the top-ranking students in my class,” she said. “And to finally be here and to be able to accomplish that, it’s really been surreal.”

Easlick said she has always been a high-achieving student. She said ever since she joined Springwood School in pre-kindergarten, her mother, Brandy Easlick, has pushed her to try her hardest in everything she does.

Her most positive experience at Springwood has been having great teachers.

“I don’t think it can be stressed enough how much the teachers who are here truly care about the students and aren’t just here to get through the day,” she said. “They truly want to make sure that everyone who comes through their doors feels important … And I think you can feel it in every classroom you go into.”

One teacher Easlick is particularly fond of is Murphy Wood, who teaches history and the senior seminar. Easlick said Wood listens to his students and is always willing to talk to them.

“And he has meant so much to me in my time here at Springwood and has helped me with speeches like the salutatorian speech,” she said. “He’s helped me with essays for scholarships that I’ve had to write. He’s truly been there for me, and I know for other members Springwood.”

Easlick thinks her greatest accomplishment at Springwood School is being awarded the title of Miss Springwood High School. She explained that students and teachers vote for who gets the title based on criteria such as grades and character.

“It’s just crazy to think that I was awarded such an honor as embodying what Springwood is supposed to be,” she said. “That meant a lot to me.”

AP and honor classes have been Easlick’s greatest obstacle at Springwood.

“They definitely challenge you, and when you first go into some of those classes, it can feel like you’ll never be able to get through it, and it’s so much work,” she said. “But as you go through it, you learn so much, and they truly prepare you for what college life is going to be like.”

Easlick said she has stayed motivated by knowing that if she does well now, she can reap benefits in the future.

She would advise future Springwood School students that while attending the school is a potentially intimidating investment in time and money, it is well worth those things because it’s a great place to learn and make friends.

“You know everyone here by name, and everyone smiles and says hello to you, and it truly feels like you’re an integral part of the community no matter where you are,” she said.

She would advise current Springwood students to not give up.

Easlick dreams of becoming a marine biologist. She explained that she likes to help others and loves animals. For a long time, she thought she wanted to be a veterinarian.

“But I went down to the beach and went to the Clearwater Marine Aquarium and Rehabilitation Center, and I found out about how they go out into the wild and help rehabilitate animals that have been hurt or can no longer be in their natural habitat,” she said. “They take care of them and make sure that they do research on what’s going on out in the wild to see how they can help, and I fell in love with the idea of doing that every day.”

If Easlick could change anything about the world, she would change people’s mindsets to help them succeed in life.

Easlick has lived in Lanett for almost her entire life but moved to Opelika this year.