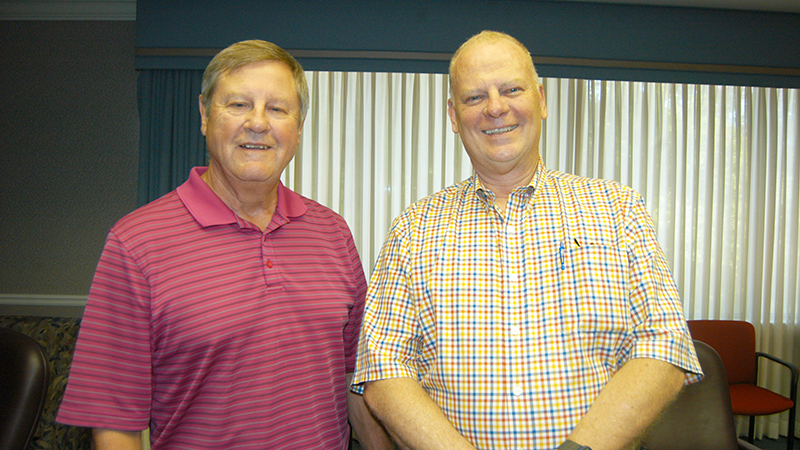 WEST POINT — Mayor Steve Tramell told members of the West Point Rotary Club on Thursday that West Point is well-positioned to see continued growth in the coming years. Kia has brought massive job growth and Point University having a walking campus in the heart of the city has played a major role in making downtown West Point a lively place.

Few cities with 3,600 people anywhere have what West Point has in Kia Georgia. It’s a manufacturing complex where anywhere between 4,000 to 6,000 people report for work each day in one of the most technologically advanced automobile manufacturing plants in the world.

Few cities of 3,600 residents anywhere have eight lanes of traffic moving through it at all hours of the day and night. That’s what West Point has in I-85 and Kia Parkway.

Within the next year, West Point will have three new roundabouts.

“We will have three of them within a mile of each other, and each one will have two lanes. I haven’t seen one like that anywhere else in Georgia,” Tramell said.

Two of the roundabouts will be at the exits onto and off I-85 at Exit 6 and another will be a short distance east of the exit at the junction of Highways 18 and 103. Ground will be broken in October for a new Love’s Country Store, to be located just off Exit 2. Kia Georgia was by no means a fly-by-night venture. What was announced in 2006 and went into production three years later is continuing to grow and grow.

“The automotive industry continues to invest in West Point,” Tramell said. “Hyundai Transys is in the final stages of completing a new facility that will supply transmissions to Volkswagen (near Chattanooga). The new plant will employ almost 900 people.”

There’s an industrial prospect looking at West Point right now. If they come here, it will mean an estimated 350 new jobs for the local economy.

“All indicators are that the automotive industry will continue to grow in West Point with the emphasis on electric vehicles in the near future,” Tramell said.

“It’s restaurant destination,” he said. “From Pokey’s ‘get almost anything’ menu to Miso sushi, there is a great variety of quality food. Point University continues to impact downtown West Point. Point is back up and to full speed ahead after the Covid shutdown. With a walkable downtown campus, numerous sports and its excellent staff, Point is changing the lives of its students and our community.”

Housing is the city’s greatest need. There’s not enough housing stock, single-family detached apartments or townhouses to meet projected growth. Tramell said he would like to see a mix of market rate residential properties.

“This is essential to the future of our city,” he said.

Located off Highway 103 on West Point’s southeast side, the Villages at Harris Creek is starting a third phase of new home construction. Grading and infrastructure work is underway on what will bring 140 new homes into the city.

“There are several other residential and mixed-use projects that are looking to build in West Point,” Tramell said. “These developments are in the area near Exit 2.”

One possibility is a 72-unit mixed-use apartment complex. It would be located behind the Coca-Cola plant and could be a step in relocating people from the city present Housing Authority units.

“We need to get people out of cinder block housing into something better,” Tramell said.

The soaring cost of building materials could slow down construction a bit, but this construction will likely take place in the coming years.

“We are facing the same challenges many businesses are facing,” he said. “Our people are the key to the city’s success. We are looking for ways to be competitive by rewarding our wage and salary policies, benefit policies and hiring processes.”

West Point residents have been seeing some new sidewalks being built. This has been taking place along 3rd Avenue near the Alabama line, on 10th Street and near the city’s recreation areas.

“These improvements have been funded by SPLOST (Special Purpose Local Option Sales Tax) and will provide a safe and reliable walking path for public use,” Tramell said. “We also made improvements to the 8th Avenue Park by installing a new playground and improving the walking trail. We are hoping to pave portions of some streets in the city, including Avenue C, Avenue E, East 7th Street and others. These projects should cost around $1 million and should be completed this summer.”

The city is looking at a major project in replacing a water intake and pump station. It would be located north of where the Waterworks Creek flows into the Chattahoochee River. The water flowing into the river from this creek is exceptionally muddy at times and flows right past the city’s present water intake, which has been there since 1964. The project would cost over $5 million but would significantly improve water quality.

Tramell said the current intake has served the city well but is nearing the end of its service life.

If it needs to be replaced anyway, why not relocate it away from the muddy water that’s emptying out of Waterworks Creek?

Tramell said that there is not an equitable distribution of local taxes collected in Troup County. The City of LaGrange and Troup County get to split 90 percent of it, he said, with West Point and Hogansville “being left a nickel apiece.”

“As long as I hold an elective office I will be speaking out about this,” Tramell said. “We are supposed to be happy with our nickel, but there’s not much you can do with that.”