Valley father remembered as hero after drowning in Lake Harding 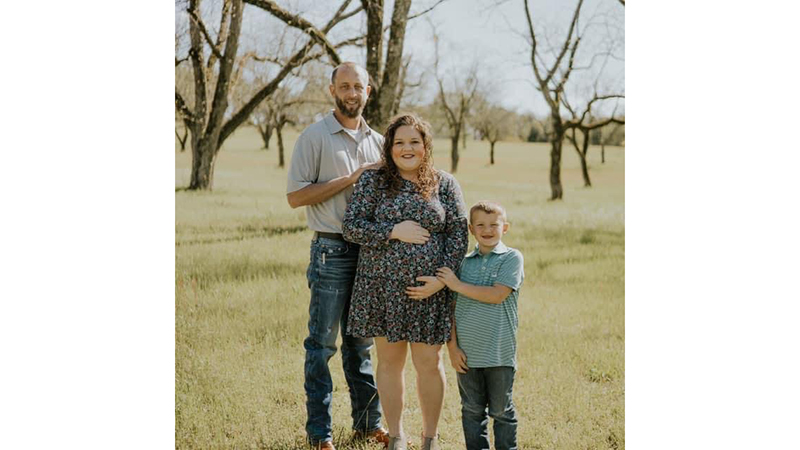 A growing family: Jacob Davidson (left) and his wife, Savannah Davidson (second from left) were expecting a second child. Standing on the right is their six-year-old son, Cranston. Photo contributed.

Jacob Davidson lived his final moments on Earth as a hero, according to his sisters-in-law, Lynsey Costin and Heather Jones, who said they were both close to Jacob.

The 30-year-old husband and father died over the weekend after leaving his boat to retrieve his son, 6-year-old Cranston Davidson, who had somehow fallen into the water in Lake Harding in Lee County. His body was tragically discovered on Mother’s Day after a three-day search.

“He was honest,” Jones said. “He loved the Lord and strived to serve him daily. He loved his wife and children. He was so excited that they were growing their family.”

“They struggled with fertility before they had their son, Cranston, and have been struggling since,” Costin said. “They just had found out Valentine’s Day, they found out that they got pregnant with a new baby … It was a miracle that it happened the first time, so they were both so excited.”

Originally, Savannah’s plan had been to hold a gender reveal on Sunday, May 15, Jones said. But due to the circumstances, in order to bring happiness into the lives of herself and others, Savannah decided to find out the baby’s gender and reveal it early to family members in her front yard.

Costin and Jones weren’t sure if Savannah would be comfortable with them revealing the baby’s gender publicly.

Jones said Savannah and Cranston are taking life one day at a time to deal with the tragedy of Jacob’s death.

Costin emphasized that Jacob made the ultimate sacrifice to save his son.

“That was his final deed here on Earth,” she said.

Before his death, Jacob had been boating with Cranston in the Halawakee Creek area of Lake Harding in Lee County, according to Sheriff Jay Jones of the Lee County Sheriff’s Office.

“And the son, the six-year-old, who was wearing a floatation device, fell off the boat,” Sheriff Jones said. “The water was a little choppy. It was breezy that day.”

Jacob, who wasn’t wearing a floatation device, saw his son drifting away from the boat and went into the water to save him, Sheriff Jones said. Jacob allegedly got to his son and cried out for help. Sheriff Jones said he might have become fatigued from trying to stay afloat.

“A boater nearby heard him yelling, went to the location where they were in the water,” Sheriff Jones said. “The father is able to push his son up toward the boater, who pulled the six-year-old into the boat with him. When he turned around to grab the father, assist the father, he was gone. And this occurred around 4:30 CDT [on Friday].”

The Lee County Sheriff’s Office received a call about the incident and began organizing a response.

Sheriff Jones gave thanks to all of the assisting agencies in the search including local EMAs, Tallapoosa County Rescue Squad and others.

“We had Fort Benning send some of their search and rescue equipment and personnel,” he said. “Russell County Sheriff’s Office assisted.”

A GoFundMe fundraiser has been organized to help Jacob’s family.

To donate, go to gofundme.com and look up “Donate to help The Davidson’s.”