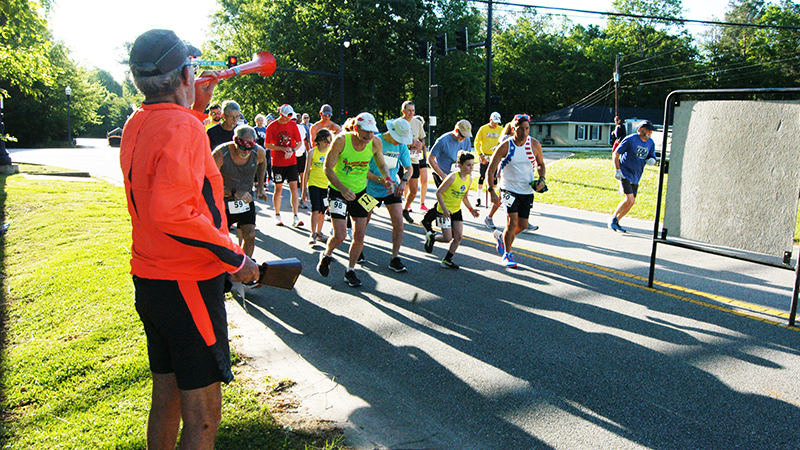 And they’re off: The simultaneous sounding of a vuvuzela and the ringing of a cow bell started a 4K run and one and five-mile walks at Saturday morning’s Hike/Bike/Run for Valley Haven School. Photo by Wayne Clark.

VALLEY — With some donations left to be counted, the 2022 Hike/Bike/Run fundraising total stood at $92,520 on Monday morning. There’s a chance it could get past the $100,000 mark for the 31st time in 32 years, but Executive Director Craig Brown is well pleased with things as they are.

“It’s been a good year,” he said. “We appreciate what everyone has done. A lot of hard work went into this on the part of our volunteers. Once again, the people of the local area have been very generous with their support.”

There’s a large amount of pocket change and green bills to be counted in the annual Pennies Make Sense campaign at local schools. There’s likely to be several thousand dollars when it’s all totaled up. There will be a water run this week at Eastside Elementary School in LaFayette. The LaFayette Fire Department will be there to provide a gentle water spray the kids can run under. Pledges to Valley Haven are being made for the fun day. “The final total could be better but could have easily been a lot worse,” Brown said.

Two years ago, most fundraising events were canceled because of the Covid pandemic. Even so, more than $36,000 was raised.

Things were more normal in 2021, but it hurt to lose the fundraising that usually comes in on LaFayette Day. It was canceled due to stormy weather that Saturday.

This year’s LaFayette Day raised approximately $11,000. The auction was a big success, too, generating just under $14,000.

Brown said that he and other members of the Hike/Bike/Run Committee are already looking forward to 2023.

“We are looking at doing some things differently and adding some new events,” he said. “We like the initiative shown by Hi-Lex, one of our local Kia suppliers. They had a big group taking part in Saturday’s one-mile walk. We’d like to have more employees of local companies coming out on Hike/Bike/Run Day.”

Saturday’s weather was ideal. It was a cool morning with a cloudless blue sky, just great for running, walking or riding a bike.

There was an opening ceremony at Valley Haven School at 8 a.m. Paul Story, the emcee for the day, welcomed everyone, said an opening prayer and played a recorded version of The National Anthem. Story kept up a lively day with music throughout the morning.

As it has been in recent years, the start/finish line for the walking and running events was located near the junction of Ram Stadium Drive and Fairfax Bypass, a short distance away from Valley Haven School. These events began with a one-mile run at 8:15 a.m. The 4K run started at 8:30 along with the one and five-mile walks. The 10-mile bike ride began in front of the school at 9 a.m. A kids’ ride in the parking lot in front of the school started at the same time. Any youngster on a small bicycle, tricycle, scooter or battery-powered ride was welcome to take part.

First, second and third-place finishers in each event were recognized at an 11 a.m. awards ceremony.

One change that’s being looked at for next year is to have all in-person racing. For the past three years, some runners have taken part in the Hike/Bike/Run virtually. They run on their own and submit their times. With the Hike/Bike/Run being an accepted event for the annual Run and See Georgia Grand Prix, the times that are submitted by those who are registered participants can earn them points.

The Run and See Georgia Grand Prix Series started in 1989 with 34 events. It now has over 400 races each year with nearly 100,000 runners taking part.