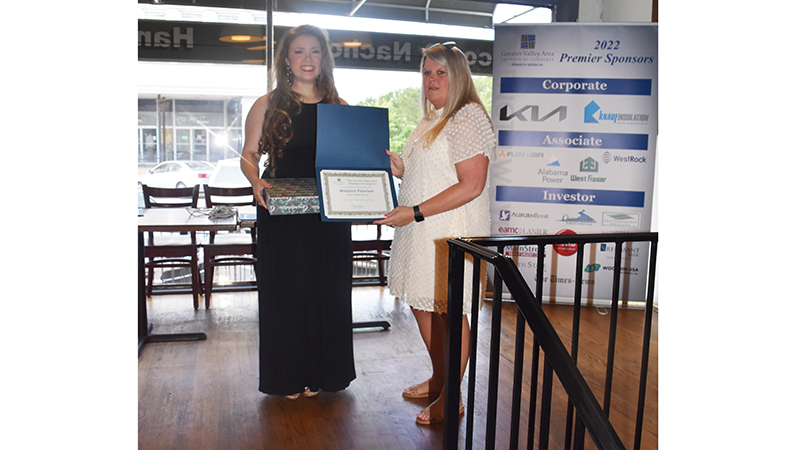 On Wednesday afternoon, students in the Greater Valley Area Chamber of Commerce’s Junior Ambassador’s program, as well as their family members, gathered at Pokey’s 8th Street Grill in West Point for an award ceremony followed by dinner paid for by the GVACC to honor the students’ participation in the program.

GVACC Executive Director Carrie Royster introduced herself and GVACC Administrative Assistant Tarin Parrish, who would be working together to hand out awards.

Royster announced that Junior Ambassadors with cords hanging around their necks had served in the program in grades nine through 12.

“I think the kids are excited about it,” she said. “I told them there is gray and there’s silver, and I love the colors.”

Royster announced that the 2021-2022 Ambassador of the Year was Valley High School student Madyson Peterson, who received a certificate and a 14-inch HP touchscreen laptop paid for by 4 Seasons Heating & Air. According to Royster, the Ambassador of the Year is selected based on points they accumulated throughout the program by attending meetings and putting in service hours.

Royster said that three years ago, when she took on her current position within the GVACC, she put in place a $2,000 scholarship for a senior Junior Ambassador. She said that this year, board members from the GVACC decided to split it into two $1,000 scholarships. The board interviewed six scholarship contestants to decide who would get the scholarships. According to Royster, they were evaluated based on volunteer hours and leadership.

“Thank you all for giving me your kids,” Royster told those in attendance. “I hope that they learned something throughout the nine months that we had them. I’m looking forward to scheduling all the great things that we’re going to do next year.”

“I’m going to open up the registration probably in the next two weeks,” Royster said. “So I’ll put out a Facebook post and all that good stuff when I do that to make sure you jump in because I do have to cap it at 40.”

The Junior Ambassador program is for students in grades nine through 12. Royster urged audience members who knew soon-to-be ninth-graders to let them know about the program.