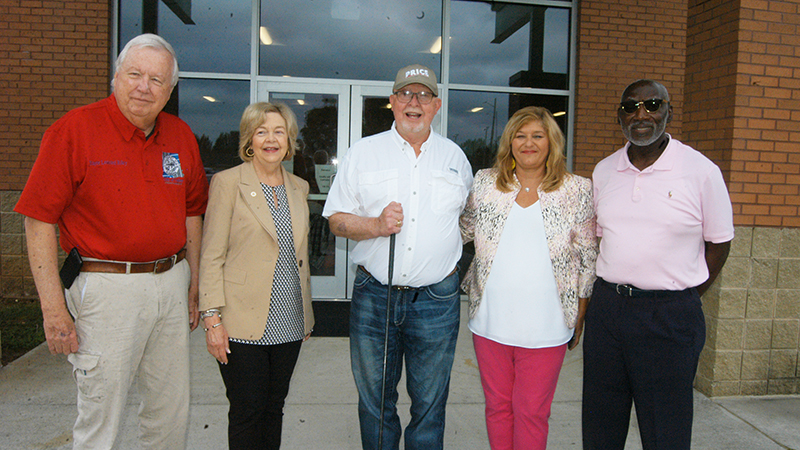 ADSS commissioner in Valley: Jean Brown (second from the left), commissioner of the Alabama Department of Senior Services, was at Valley Senior Center on Wednesday to meet with a large group of Chambers County seniors and to celebrate them during Older Americans Month. She was joined by Valley Mayor Leonard Riley (at left), Lanett Mayor Jamie Heard (right) and LaFayette Mayor Kenneth Vines (not pictured). State Senator Randy Price (third from left) and State Representative Debbie Wood (fourth from left) won re-election campaigns Wednesday. Photo by Wayne Clark.

VALLEY — Valley Senior Center played host to a special Older Americans Month event on Wednesday. Participants in the Valley Senior Center program were joined by senior center members in Lanett and LaFayette to make for a big senior delegation to welcome Jean Brown, commissioner of the Alabama Department of Senior Services.

Also present were two people who were very happy about the results of Tuesday’s Republican primary. State Rep. Debbie Wood and State Senator Randy Price both won their party primaries by comfortable margins.

County commissioners Sam Bradford and Debra Riley were there along with the mayors of Chambers County’s three major cities, Leonard Riley of Valley, Jamie Heard of Lanett and Kenneth Vines of LaFayette.

Brown is in her third year as ADSS commissioner. Gov. Kay Ivey appointed her to this position in her cabinet in April 2019. She had previously served for 10 years as a justice with the Alabama Supreme Court.

Former Valley Council Member Ray Edwards introduced Brown to the large gathering inside the senior center’s Donald Perry Williams Activity Room. Edwards, who is the long-time board chair of the ADSS, said that Brown had been one of the best commissioners the Department of Senior Services has ever had. He commended her for her ability to quickly recognized and resolve problems affecting Alabama seniors.

“When she became commissioner, we were having problems with the state’s food vendor,” Edwards said, “but she got that straightened out in a hurry.”

Brown thanked Edwards for those kind words and commended him on having done great work on behalf of Alabama seniors as the ADSS board chair. She thanked Michael Morrison and his staff with the East Alabama Area Agency on the Aging for the work they do for the seniors in east-central Alabama. She said that Alabama seniors are fortunate to be served by one of 13 area agencies on the aging.

Brown read from a proclamation signed by Gov. Kay Ivey on April 26 recognizing the month of May 2022 as Older Americans Month in the state.

The proclamation reads that older adults are essential and valuable members of the communities where they live.

“Older adults play vital, positive role in our communities — as family members, friends, mentors, volunteers, civic leaders, members of the workforce and more,” Brown said. “That’s why Older Americans Month has been recognizing the contributions of their growing population for 59 years.”

Brown added that the ADSS is committed to engaging and supporting older adults, their families and caregivers.

“It is important to bring all of our generations together to take part in activities that promote physical, mental and emotional well-being,” the commissioner said. “Alabama is fortunate to have a number of community-based services that support independent living and provide opportunities for older adults to work, volunteer, learn and lead.”

One senior present was in for some special recognition. Mary Frances Sims was asked to stand for the crowd. She is 101 years of age.

Edwards has had a Christmas stocking distribution for local seniors for going on 30 years now. He, wife Jackie, children, grandchildren and great-grandchildren have carried on this tradition. They started by stuffing large red and black stockings with fruit, candy, signed Christmas cards, a coffee mug and small gifts in the Edwards garage in Todd Addition. In recent years, a horde of volunteers has pitched in to help fill the stockings in the back room of Timeless Antiques.

“We are filling 300 stockings every Christmas,” he said.

Edwards loves to distribute them at local senior centers and Sylvia Word Manor.

“Last year, a woman from Sylvia Word wanted to know why my great-grandson Gavin wasn’t with me,” Edwards recalled. “I told her to ask Santa Claus about that, and he would tell her.”

When the woman tried to do that, she quickly realized that it was Gavin inside the Santa suit. She laughed, looked at Edwards and said “You tricked me didn’t you?”

Edwards is a cancer survivor but wants to keep this family tradition going as long as he can.