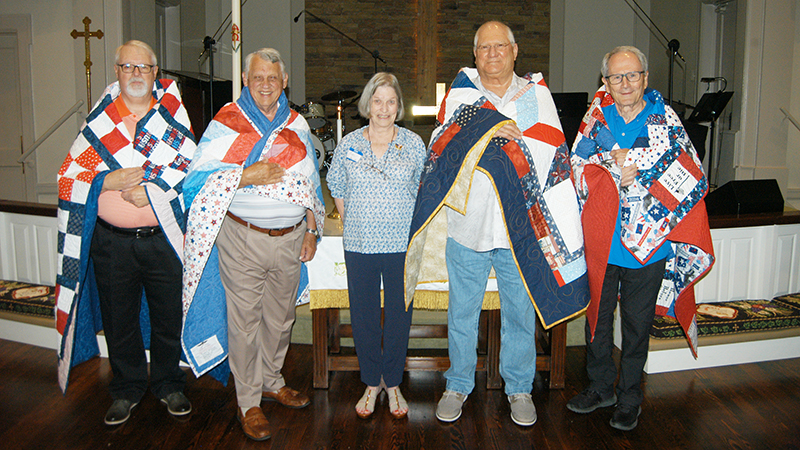 Former classmates honored: Four men who graduated from Valley High in 1964 were honored by the Quilts of Valor organization on Saturday. At left are Tom Swilling and Russell Williams; on the right are Michael Lashley and Morris Henderson. At center is Charlotte Wilkerson Gormley, who made the presentations. Photo by Wayne Clark.

Two Quilts of Valor ceremonies took place in the local area on Saturday. At 9:30 a.m., four Class of 1964 graduates from Valley High received quilts in the sanctuary of Langdale United Methodist Church, and at 11:30 a.m., four veterans received quilts at the monthly program hosted by the Georgia-Alabama State Line Chapter of the Quilts of Valor at sewingmachine.com in downtown West Point.

The church ceremony was part of the annual Langdale Reunion, which took place in the Family Life Center of Langdale Methodist. The four men being honored saw service in the Vietnam War following high school graduation. They were chosen for recognition by a former classmate, Charlotte Wilkerson Gormley, who is active with a QOV group in Virginia Beach, Virginia.

“I didn’t know they’d served in Vietnam until I caught up with them on Facebook,” she said.

Gormley is also a veteran.  She served as a nurse for 25 years and saw duty in Germany where she treated wounded soldiers from the Bosnia and Gulf War conflicts. She has also served as a head nurse at the U.S. Capitol.

In 1970-71, Swilling was a staff sergeant in the U.S. Air Force and stationed with the 14th Aerial Port Squadron at Cam Rahn Bay. Williams was in Vietnam in 1967-68. He was a staff sergeant with the 388th A&E Squadron and also saw duty in Thailand. Lashley was in Vietnam in 1969 and 1970. He was a U.S. Army Ranger with the 4th Infantry Division, stationed at An Khe in the Central Highlands region. Henderson was with the Military Intelligence (MI) Battalion and served throughout South Vietnam.

In addition to the quilt, each veteran received a Vietnam Veteran lapel pin. “A Grateful Nation Thanks and Honors You” is embossed on the back of each pin. An eagle is on the front, representing courage, honor and dedicated service to the nation.

The Quilts of Valor organization, said Gormley, does what it does to show appreciation for veterans and active-duty personnel for serving our country.

“We especially want the Vietnam veterans to know that we love you and we want to take care of you,” she said. “The Quilts of Valor program is a beautiful way to honor those who have given so much for our country. Nine million service members went to Vietnam. Six million of them are still living. Each one deserves a quilt and a pin.”

Dr. Nelson is with Inspire Academy. He’s the nephew of State Line quilter Carol Cofield, who was quite proud to present him his quilt. Two of the recipients, Matt Burnette and Devin Arnold, are West Point firefighters.

In addition to Cofield, other quilters present on Saturday were Hetty Mapp of Newnan, Sherri Reichardt of Lake Harding, Penny Daniel of Huguley and Martha Scott of Lanett.

The Quilts of Valor was founded in 2003 by Catherine Roberts. At the time, her son had been deployed to the Iraq War. She was constantly worried for his safety and one night had a dream of a post-deployment warrior sitting on the side of his bed and struggling with his war demons. As the dream continued, she saw him wrapped in a comfort quilt and in a state of hope and well-being.

It took Roberts’ small group some three years to make and award 100 quilts, but as word spread about what they were doing, chapters started organizing all over the U.S. In May 2014, the 100,000th quilt was presented. Since then, the number of presentations in the U.S. has surged past the 300,000 mark. It now stands at 302,712.

“Each quilt presentation carries with it a three-part message,” Sheila Simpson said. “First, we are honoring you for your service and your willingness to leave all you hold dear and stand in harm’s way in a time of crisis for all of us. Second, we know that freedom is never free. Our quilts are meant to say thank you for your many sacrifices. For those of us who have never seen combat or been in a war zone, such experiences are beyond our capacity to comprehend. Finally, these quilts offer you comfort. Throughout history, when young men left home to fight in a war, many of them took a quilt made by a family member that they called a comfort quilt. It may have been all these young men had to provide the warmth memories of home can bring. We want you to use this quilt. It is not meant to be hung on the wall or put in a display case.”

The local chapter has made a special effort to award quilts to veterans of World War II and Vietnam. Those Americans who came of age during WWII have often been called “the Greatest Generation.” Precious few veterans of that war are still living. The Vietnam War was a divisive period for our country, and some Americans were rude to soldiers returning home, insulting them with such reckless comments as “baby killers.”