12-foot skeleton gets makeover for every occasion 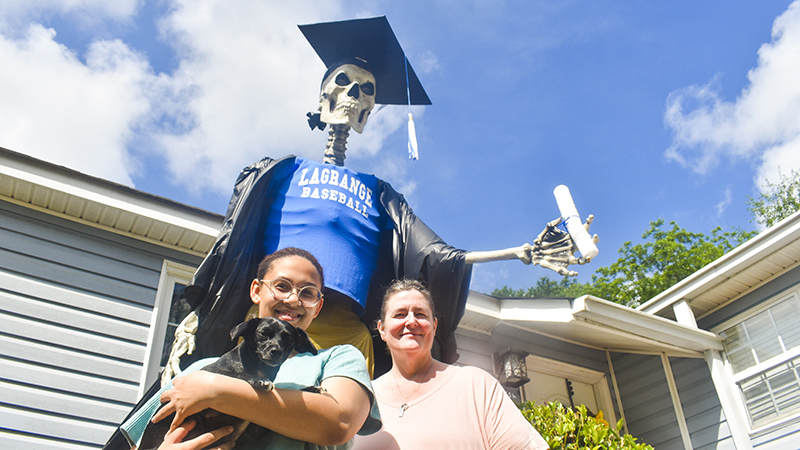 There is often a conundrum among homeowners regarding what to do with their collection of holiday decorations once the holiday in question has passed. For those with the space, such decor goes into storage for a year. Others may choose to donate items and start fresh the next holiday.

Angela and Sam Royal are the proud owners of Rick R. Mortis, a 12-foot-tall skeleton with a sense of style. Rick R. Mortis lives with the Royals on Country Club Road and is the subject of a lot of head-turns — and thankfully no accidents — for drivers taking the turnabout.

“When someone asks me for directions [to get to my home], I just say you’re there when you see the skeleton,” joked Angela, a Great Wolf Lodge employee. “I’m pleasantly surprised that the response [to Rick R. Mortis’ presence] is as enthusiastic as it is.”

The Royals bought Rick R. Mortis in September 2021 for Halloween after seeing one displayed in a yard in Chattanooga, Tennessee. As the holiday came and went, the Royals became attached to their unique yard decoration and sought a way to make him a permanent fixture. They soon found out they were not alone with this unique demonstration. As Rick R. Mortis’ popularity grew, the Royals decided to give him his own Facebook page. His profile describes him as a retired archeologist from Boston, Massachusetts. In even better news, he’s single. As of June 3, 2022, Rick R. Mortis has 864 followers.

“There are all kinds of 12-foot skeleton Facebook groups, so we started seeing some of the things other people were doing and we wanted to continue after that,” Angela said, adding that the groups share tips and clothing ideas.

Using the inspiration from these groups as well as their own creativity, the Royals found ways to create accessories for Rick R. Mortis so he could be dressed for every occasion. Most of his clothes are bought in the largest sizes the Royals can find. Christmas included a massive hat and suit and St. Patrick’s Day included a red beard purchased online. For graduation season, Rick R. Mortis was dressed in oversized black trash bags to resemble graduation robes for graduation season. Rick R. Mortis even donned gear for May the Fourth, also known as Star Wars Day. Most displays will last three weeks to a month. The disassembling process is a chore, Angela said, and her and her daughter can take as long as several hours to over a day to switch Rick R. Mortis’ outfits.

“Every once in a while, if I don’t have time to put him together, I’ll just throw his arms and head in the back seat on my way to work and forget about him,” Angela said. “It gets a couple of looks.”

The Royals additionally dress Rick R. Mortis up for specific occasions, such as a visit from the LaGrange High’s Baseball team. In the near future, the Royals plan to use Rick R. Mortis as the star of a fundraising event.

In August, the Royals plan to participate in the Skeletons for St. Jude fundraiser where they and other 12-foot skeleton enthusiasts will raise funds for the St. Judes Children’s Hospital. St. Judes goal this summer is to raise $250,000, with the Royals along with other skeleton enthusiasts hoping to raise $100,000. They also plan to participate in breast cancer awareness month in October as well as a fundraiser for Chiari malformation, which Sam is receiving treatment for.

Chiari malformation is a condition that causes brain tissue to settle into the spinal canal. In Sam’s case, her brain is essentially growing outside her skull, Angela explained. Sam additionally deals with a 20-inch synovial cyst on her back and has scoliosis as a result of the condition. However, her treatment has been well-received, and she will attend LaGrange High School for her senior year in the fall.

To keep up with the ever-changing adventures of Rick R. Mortis, visit his Facebook page at https://www.facebook.com/profile.php?id=100080691224705.