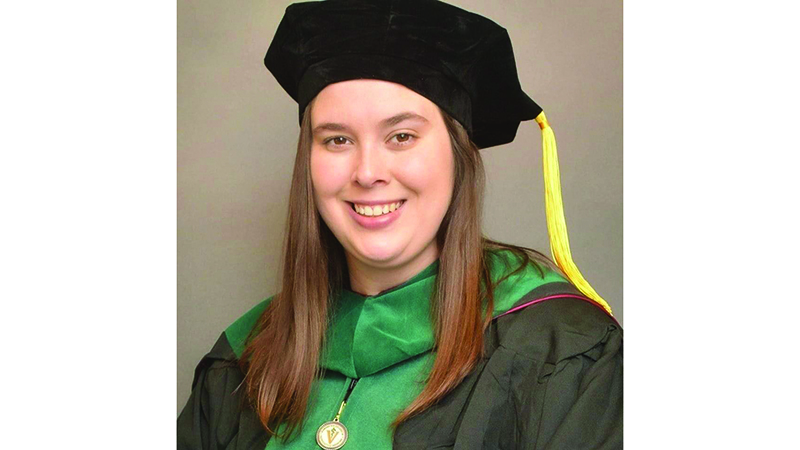 Over the past two and a half years, Dr. Haley Warwick has transported or adopted out 950 animals with Big Valley Animal Rescue as its intake and rescue coordinator. She will be missed after she leaves this weekend to start a medical residency program in Centreville, Alabama at Cahaba Medical Care. In May, Warwick graduated from Edward Via College of Osteopathic Medicine in Auburn. She said she will specialize in family medicine.

Warwick isn’t leaving Big Valley Animal Rescue entirely. At least, not yet. She’ll continue to work for a while as a consultant for the organization but will no longer be the intake and rescue coordinator. She will eventually leave the organization for good.

In lieu of graduation presents, Warwick has asked for people to donate to Big Valley Animal Rescue. They can do this on PayPal (https://www.paypal.com/paypalme/bigvalleyanimal), Venmo (@bigvalleyrescue) or Cashapp ($bigvalleyrescue).

Warwick said she became interested in becoming a doctor when her grandfather was ill.

“Just helping take care of him, I kind of fell in love with medical, and it kind of went from there,” she said.

Juggling her school work with her job at Big Valley Animal Rescue wasn’t easy, but Warwick made it happen.

“I had to make sure school came first,” she said. “But it was easy to work in rescue because it was one of my passions. Honestly, I couldn’t have done it by myself. It was a group effort.”

Warwick joined Big Valley Animal Rescue because she was an animal lover. She said all the pets she owned before were rescue animals.

“I had the summer off between the first and second year of medical school, and they posted on Facebook that they were needing volunteers, and I was like, ‘Oh, I could do that for the summer and help out.’”

Warwick has adopted four animals into her own home — A dog named Caroline and three cats named Catherine, Waffles and Diana.

“They were all medical cases that were pulled by Big Valley,” she said. “They were found in the community as strays. Like, my dog was owner-surrendered, but she’s a medical case … I was one of the main medical fosters, and I foster failed them because I had to fight so hard to keep them alive and get them better that I got super attached to them.”

Warwick’s favorite thing about working with Big Valley Animal Rescue was successfully saving animals. Her least favorite thing, naturally, was not being able to save all the animals her organization took in.

“People don’t understand it, but in the animal rescue world, we really do lose sleep over the animals that we can’t save,” she said. “I’ve had fosters that I’ve had to put down for medical reasons, or we lost some of my fosters to parvo, and it’s really hard. It takes an emotional toll because you become attached to them and you’re fighting to save them. But even the ones that are still in the shelter that don’t make it out alive, people don’t realize that we cry for those dogs, too, because we want to save them all.”

Warwick recalled a warm memory she had with her dog.

“My dog that was a medical case that I kept — when she was surrendered to us, she was surrendered with a muzzle on because she had vaginal prolapse and she was in pain and growling at people,” she said. “I just remember sitting on the floor with her at the vet. She didn’t want to be mean, but they gave her a pain shot, and I took the muzzle off, and she kind of melted into my lap and was like, ‘Thank you for saving me.’”

Another warm memory of Warwicks was seeing dogs get excited to be pulled from shelters.

“I did a lot of behind-the-scenes things,” she said. “I did all the paperwork for vetting. I helped organize transports. I helped network the dogs, helped with fundraisers.”

Warwick believes she will end up working with animals again in the future.

“Yes, I saved 950 animals,” she said. “But we couldn’t do it without the support of the community and our fosters and volunteers because yes, I had a part in that, but I couldn’t do it by myself.”