Bikers for Bentley event raises over $4,000 to aid Bonner’s recovery 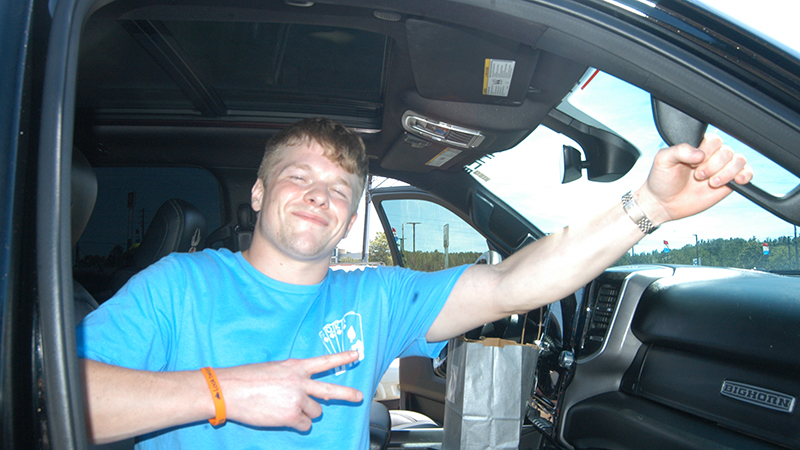 All smiles: Bentley Bonner hasn’t had much to smile about since being seriously injured in an accident on April 10. He was riding home to Valley on his motorcycle after some late-night studying at Auburn University when a drunk driver swerved into his lane and hit him head on. He was all smiles on Saturday when the Capt. Jason Fuller Memorial Biker Group held a benefit poker run for him. He rode in the lead vehicle with his best friend, Kendall Andrews. Photo by Wayne Clark.

VALLEY — With some money yet to be counted, Saturday’s Bentley Bonner poker run benefit by the Capt. Jason Fuller bike group has raised over $4,000.

A total of 65 motorcycles and 12 street-legal cars and trucks took part in the poker run. It started at King Auto Corner in Valley at noon with stops at the American Legion in Opelika, the Circle W on the Lee-Chambers County line, Purge Nation in downtown West Point with final stops at the 104 Restaurant & Pub and the Hooch Restaurant at Highland Marina in LaGrange.

“It was a great day,” Miles said. “We all had a good time. Bentley told me it was the most fun he’d had since the day he had his accident.”

Bentley rode in the lead vehicle, which was driven by his best friend Kendall Andrews, a member of the Valley City Council. Andrews has a degree in civil engineering from Auburn, and Bonner was working on one when seriously injured in an accident on April 10.

Bentley was a Dean’s List student and was on course to graduate this December. Those plans were put on indefinite hold after the accident.

Bentley was on his motorcycle on his way back home to Valley when hit head-on by a drunken driver who had swerved into his lane. He sustained a broken leg, broken pelvis and a broken arm in the accident. Bentley was airlifted to UAB Hospital in Birmingham, where he received emergency surgery to remove his right leg. Two days later his broken pelvis was put back together with screws and metal plates. On April 13, he had another surgery on his leg.

According to family members, he’s taken three steps back to every step forward during a difficult recovery. He has had to have some skin grafts and has had to battle sepsis, which takes place when an infection you already have triggers a chain reaction throughout your body.

“The economy is not good right now with everything costing so much,” Miles said. “But the people of Chambers County are really good in looking out for our own. We did that again on Saturday in showing our support for Bentley.”

At Saturday’s kickoff, Colby Conway presented a $200 check on behalf of American Legion Post 18 in Opelika.

“Bentley and I grew up together and were at Valley High at the same time,” Conway said. “But we took very different paths in life. We hope this helps get you back on two wheels.”