Bobby’s Backyard Brotherhood back for its 20th year 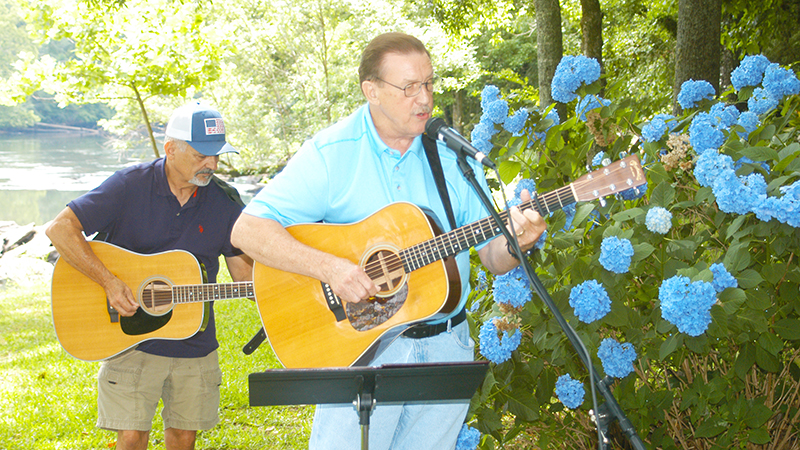 Day on the River: On Tuesday, Bobby’s Backyard Brotherhood celebrated 20 years of prayer for those in need, who are ill or have loved ones in military service. The annual Day on the River in the Langdale community marks the Brotherhood’s commitment to continue this effort by Christian men to pray for a better world. Shown above, Leonard Thrower (right) and Bo Bowens (left) strum a few tunes on the guitar. Photo by Wayne Clark.

VALLEY — Bobby Elliott has dealt with some mighty setbacks over the last few years with the COVID-19 pandemic, the loss of his beloved wife Mary Ann and some health problems of his own, but somehow, some way he hosted a Day on the River on Tuesday to celebrate the continuation of Bobby’s Backyard Brotherhood into its 20th year.

It started in 2003 with some prayer between some long-time friends in a shop building behind Elliott’s Langdale home. With him that day were long-time friends Handley Davis, Bo Royal, Charles Hall and Richard Perryman. The subject came up that there were a lot of people in the world, some in their own neighborhoods, who needed someone to pray for them but would not ask for it. The five Christian men decided then and there to pray for anyone and everyone who needed it, whether it be for a health crisis, military service, problems with a loved one or who just needed the Lord to touch their heart.

When the five men went their separate ways, Elliott said he’d like to keep having these prayer meetings.

“I will never forget Richard telling me that he’d like to be back the same time next week,” Elliott said. “That first meeting was on a Tuesday, and we started meeting regularly on Tuesdays.”

As word got around about what was going on in Bobby’s backyard, more men started coming to those Tuesday morning prayer meetings. Elliott then decided to change the meeting place from his backyard shop to the Langdale Congregational Christian Church, where he was the pastor. Participation and prayer requests grew in the ensuing years. Pastors and members of other churches in the Valley area made it a point to be there on Tuesday to pray for anyone in need and for the nation and its leaders in general.

The COVID-19 shutdown halted things for a time, and health problems for the Elliotts kept it from gaining momentum. One dedicated member of the backyard brotherhood, Marc Hicks, played a big part in keeping the prayer group going. Elliott thanked him for that in Tuesday’s Day on the River program.

“You do a lot for us, and we appreciate it,” Elliott told the sheriff. “You always make us feel at home when you are around.”

“I appreciate what you and the Brotherhood do for the community,” Lockhart said.

Elliott also thanked former Valley Police Chief Tommy Weldon for his help in making past Days on the River programs successful and memorable. He also recognized the current chief, Mike Reynolds, and Republican nominee for sheriff, Jeff Nelson, for being there and for the support they have offered.

Elliott thanked his brother-in-law, W.L. Gillenwaters, for being there to sing Christian music for the gathering.

“His wife died last week,” he said. “Keep him in your prayers. He has been going through a rough time. His wife was my wife’s sister.”

Elliott said that he has gone through a difficult period since March 2020 and was very happy to host the 20th anniversary of the annual Day on the River.

“God is still speaking to us,” he said. “We all know that. We should all be slow to speak, slow to become angry but quick to listen. God can speak to us through the wisdom of other Christians.”

Elliott said there’s one word – love – that’s the key to solving all our problems.

“It can’t be said enough,” he said. “Let other people know you love them.”

Three local ministers who regularly attend the Tuesday morning meetings of the Backyard Brotherhood talked about what it has meant to them. Sam Wood, who succeeded Elliott as the pastor of the Langdale Congregational Christian Church, said that he has been on a whirlwind ride since becoming pastor approximately one year ago.

“I knew I was home when I came to the church and met Bobby,” he said. “He talked to me about the Brotherhood. I started going to the meetings and fell in love with what was going on. We fellowship and sometimes kid each other, but we all have a good time. We are all bound together with the blood of Jesus. I have learned so much from this group. I can’t say enough good things about it.”

Rickey Cannon, pastor of the Pleasant Hill Baptist Church in northern Chambers County, said that it has been a very rewarding experience for him to have been a part of the Brotherhood for several years now.

“It is a loving group of men,” he said. “When you walk into the room with them, you feel the spirit of God. I have never known anyone else as dedicated to doing something like this as Bobby Elliott. Thank you, brother Bobby, on keeping this brotherhood together.”

David Bradshaw, pastor of the First Christian Church of Lanett, said the Backyard Brotherhood means a lot to him. “There’s something special about it,” he said. “It is so good to listen to each other and to pray together. Coming to these meetings has a way of making you stronger when you leave than you were when you got there.”

The music by the river included Gary Harris playing a jazz version of “What a Wonderful World,” a song made famous by Louis Armstrong, and some picking and singing from guitarists Leonard Thrower, Bo Bowen and Mr. Gillernwaters. Everyone joined in a lively version of “I’ll Fly Away.” Thrower did a song in tribute to Bobby’s Backyard Brotherhood, and Gillenwaters did a moving version of “Jesus Will Outshine Them All.”

Thrower closed with a song written by Albert E. Brumley, “A Beautiful Morning by the River of Life.” Thrower said no one could sing it better than the way the Alsobrook Quartet from Fredonia used to.

Pastor Cannon asked for everyone to sing “When the Roll is Called Up Yonder” for Elliott. There’s a big of teasing involved in that.

“One day when I was on my way to visit people in the hospital,” Elliott explained, “that song came on my car radio. I turned it up loud and was singing along with it. I got so carried away that I was driving 60 miles an hour in a 40-mile-an-hour zone. Thankfully, I slowed down before a policeman got after me.”

Elliott said he’s grateful he was able to get his wife, Mary Ann, to one of the Days on the River.

“She had always wanted to see one, and I’m glad we were able to get here for one of them,” he said.