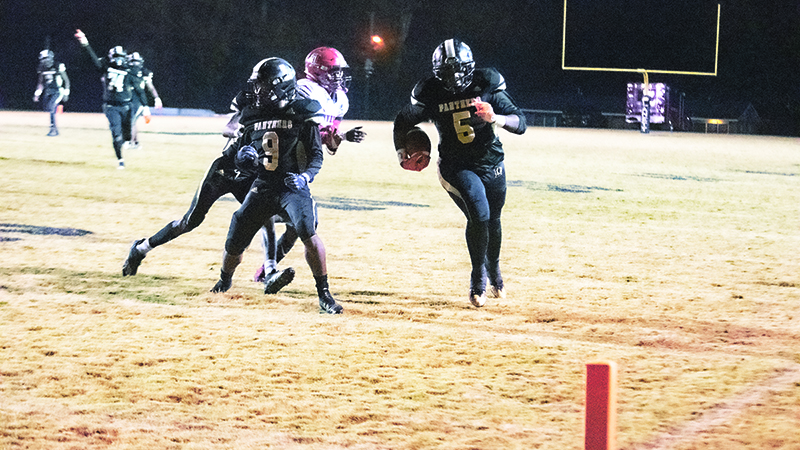 From panther to Tiger: Caden Story may be playing defensive lineman at Clemson, but he also scored some touchdowns at tight end for Lanett. File photo.

Caden Story will be moving to Clemson on Saturday to officially start his college football career.

“It’s a little bit emotional,” Story, the four-star defensive tackle, said. “I feel like it will all work out in the end.”

Caden knows his parents, Kasse and Clifford, will miss him too.

“They’re really emotional, especially my mom,” Story said. “My dad just knows what’s in me, what I’m able to do and what I’m about to become. I’m just going to make him proud.”

Story described what he can contribute to Clemson.

Even though he’s joining one of the top defensive lines in the country, Story doesn’t plan on burning his redshirt this year.

“I don’t plan on redshirting. I plan on going in and doing whatever it takes to earn a spot,” Story said. “If that’s the plan God has for me to redshirt and sit back and learn and observe from my freshman year, then that’s what I’m going to do. I’ll come back in my [second] season ready to play.”

Story also has a few games he’s looking forward to this year.

Story also has a few NIL deals in the works.

“I’ve been talking to Future One, Hollister, Applebee’s, PSD, and Ethika,” Story said.

None of those are agreed upon yet, but they are in the talking stage. Clemson will continue summer workouts until they start fall practice in August. Story and the Tigers will open up the season against Georgia Tech in Atlanta on Sept. 5.