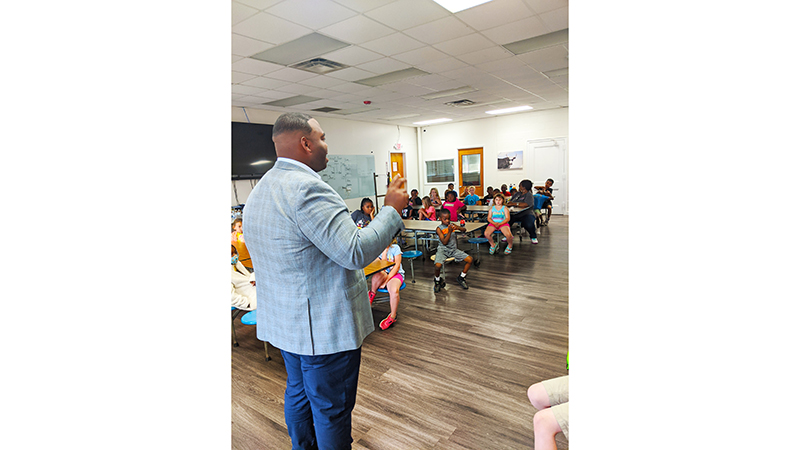 On Thursday, students at The Growth Academy in Valley were treated to a pep talk by Cameron Reed, the equipment administrative assistant for the Chicago Bears and founder of The Reed Foundation. Reed graduated from Lanett High School in 2017.

The first thing he talked to the students about was confidence.

“How many of you guys have been in class and your teacher gives you a paper and you just feel like you can’t do it?” he asked.

Many of the students raised their hands.

“How many of you guys attempt to just don’t do it at all?” he asked. Several students raised their hands.

“Starting this year, when you guys get to class, let’s take the approach and try,” he said. “Trust me. Trying, trying, trying is the best thing that you could ever do.”

Next, Reed talked discussed bullying, something he dealt with as a child.  Reed said people used to call him fat.

“Wow, that’s a big old boy,” he said, imitating his bullies. “That’s a fat boy. You can’t run. You can’t do this and that. And so, guess what? I had to go say something.”

When he was a sophomore, he said he got bullied by a grown man on Facebook.

Reed didn’t let the incident tear him down. He was happy to be doing what he wanted to do. He encouraged the students to do what they wanted to do.

During his senior season, Reed received seven scholarship offers. He told the students they could get scholarships for all sorts of activities.

Reed became an equipment manager at Wallace State Community College. He then went to work as an equipment manager for the Tennessee Titans through the National Football League. Reed emphasized that he managed to do this despite being bullied in elementary, middle and high school for being a water boy.

“Guys, I stepped out and did one of the craziest things that many people don’t want to do — washing sweaty clothes,” he said. “Seriously. I left the Tennessee Titans, went back to Wallace State. I was a student. Guys, I went from being a water boy to an equipment manager to being the director of baseball operations while being a student.”

Reed said he then went to work as an equipment manager for the Auburn Tigers. He encouraged the students to always give “maximum effort,” as it would pay off. While at Auburn, he said received a call offering him a position with an NFL team.

Reed told students to realize what they were doing wrong so they could stop doing it.

He told students he is now an administrator over equipment for the Chicago Bears.

Reed told the students that money isn’t everything.

He told the students to follow their hearts and always do their best.