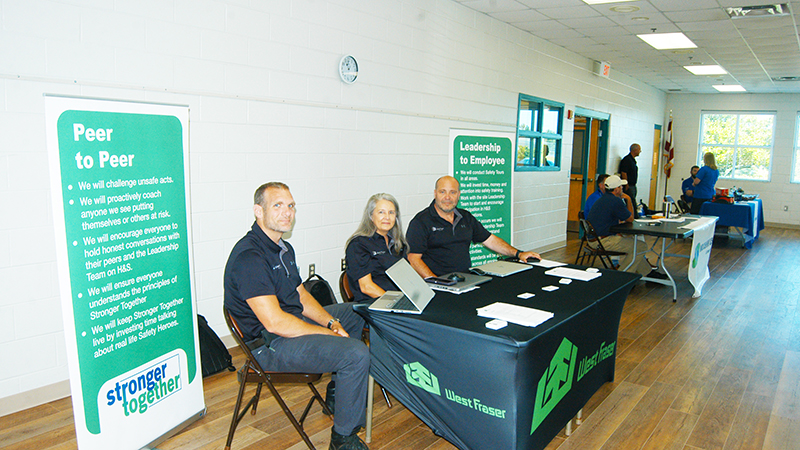 VALLEY — Representatives of several local industries were in Valley Community Center’s Bobby Crowder Room on Wednesday to talk to interested job seekers about positions that need to be filled in their local plants. Some of these jobs pay in the $16 to $18 an hour range.

A job fair was being presented by the Chambers County Development Authority (CCDA) as a means of helping Chambers County industries find the people they need to help get their plants running to meet current market demand.

CCDA project manager Ansley Emfinger and intern Andie Roberts were there to offer assistance to such industries as John Soules Foods, Ajin USA, Daedong Hi-Lex, West Rock, Wooshin USA, and West Fraser. There was also a new company to the area, Wayne Davis Concrete, which will soon be opening their 19th plant in the Lanett Industrial Park.

HR generalists Stephanie Royal and Felicia Faust talked to job seekers about their possibilities at John Soules Foods. In its first year of production in the local area, John Soules Foods has already made a huge impact in the local community. In one of the most technologically advanced food processing plants in the world, the company is turning out chicken nuggets, chicken patties, chicken strips, dino nuggets and char broil chicken at an amazing rate. They will soon be getting into beef products.

Right now, there are approximately 50 openings for production jobs that pay $14 and more per hour. The plant is in production six days a week, Monday through Saturday. The first shift runs eight hours and day and second shift 10 to 12 hours.

David Wilkerson and Bora Kwat of Ajin USA’s Human Resources Department talked to people coming in about career opportunities with Chambers County’s largest employer. Over 600 people are employed by Ajin. “We have approximately 15 openings in assembly and maintenance,” Wilkerson said.

Wayne Davis Concrete is looking to hire 10 to 12 people for its new Lanett plant, which should be open in July. “We need CDL drivers, loader operators, and plant maintenance people,” said Joseph Arp, safety director.

Founded in Tallapoosa, Georgia in 1971 by Wayne and Joyce Davis, the company has grown to being one of the leading privately-held, family-operated ready mix suppliers in the west Georgia-East Alabama region. Wayne Davis Concrete has 18 plants and more than 120 ready-mix trucks. WDC has more than 250 employees.

Tremonte Johnson was stationed at the Daedong Hi-Lex table and talked to people about employment opportunities at DH-L, where an estimated 200 employees produce door panels for Hyundai and Kia. “We are looking for assembly operators, material handlers. quality control personnel and trainees,” he said.

Plant Manager Peter Gray and HR Coordinator Michael Johnson talked to people about working at the West Rock plant in the Huguley Industrial Park. Starting pay is $16 an hour. “We are a very stable business,” Gray said. “We stay busy year round.”

The Lanett plant produces an astounding four million cartons every day. West Rock has 30 locations in the U.S.

“We are looking for around 20 people,” Gray said. “We stay busy and have to hire constantly.”

Kirby Hadaway, general manager of human resources, and production supervisor Randy Whitehead talked to people about the employment needs of Wooshin, located in the Chambers County Industrial Park at Cusseta.

“We are pretty steady at 175 employees,” Hadaway said. “We’d like to hire 25 new people. Our goal is to replace temporary employees with permanent hires.”

West Fraser’s Huguley Mill has been producing OSB for more than 20 years. Pay starts at $18.92 an hour with skilled employees making close to $30 an hour. “We have several positions we would like to fill,” said human resources manager Myron Toews.