Chambers Academy path to championship starts in the weightroom 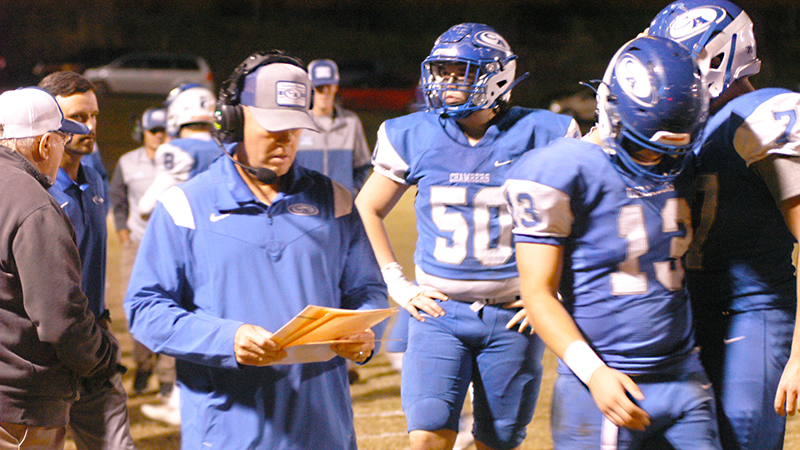 Eye on the prize: Chambers Academy head coach Jason Allen (left) looks over his playbook during the AISA Class AA semi-final game against Escambia in November. The Rebels lost 37-13, missing the state championship game for the first time in six years. Photo by Wayne Clark.

The Chambers Academy Rebels football team has decided to skip spring practice and focus on summer workouts instead. This decision was influenced by several football players participating in other spring sports.

“We’re a small school,” Rebels head coach Jason Allen said. “A lot of our athletes play all three sports. Sometimes you have to know your kids. You get towards the end of the year, and you can tell they’re a little bit tired.”

Allen believes this is a trend among several schools in Alabama due to the increased flexibility of summer scheduling. However, Allen doesn’t think this will make it more difficult for his players to adjust to his system.

“I’ve been here for a long time, so my kids know my system,” Allen said. “There have been many years we haven’t done spring practice, and up until this year, we’ve been to six state championship games in a row. We feel like it doesn’t make a whole lot of difference for us.”

Summer workouts will start for the Rebels on June 6, ending in late July. Allen has several goals for Chambers before they start the season in August.

“We want to make sure we’re in great physical shape,” Allen said. “We want to be mentally ready from a playbook standpoint. Our guys know our system, but we want to be sharp fundamentally. We want to work on the little things that it takes to be good. We want to be locked in because we start on August 1.”

The biggest challenge for Allen is replacing the seniors they lost from last year.

“We graduated 18 seniors, which is the most I’ve ever graduated,” Allen said. “We lost our quarterback. We lost our running back and some wide receivers. We’ve got some guys coming up that we feel like it’s their turn to shine.”

One of those guys Allen mentioned is upcoming senior Gavin Kight.

“He’s been starting for us for almost five years,” Allen said. “He’s just a physically imposing player. He’s definitely one of our leaders in the backfield and at linebacker. We’ve got a lot of good football players, but I feel like Gavin is going to unquestionably be one of the leaders on our football team.”

The Rebels are coming off of a 10-2 season last year where they lost in the state semifinals to Escambia Academy and will kick off the 2022-23 campaign at home against Lee-Scott Academy on Aug. 19.